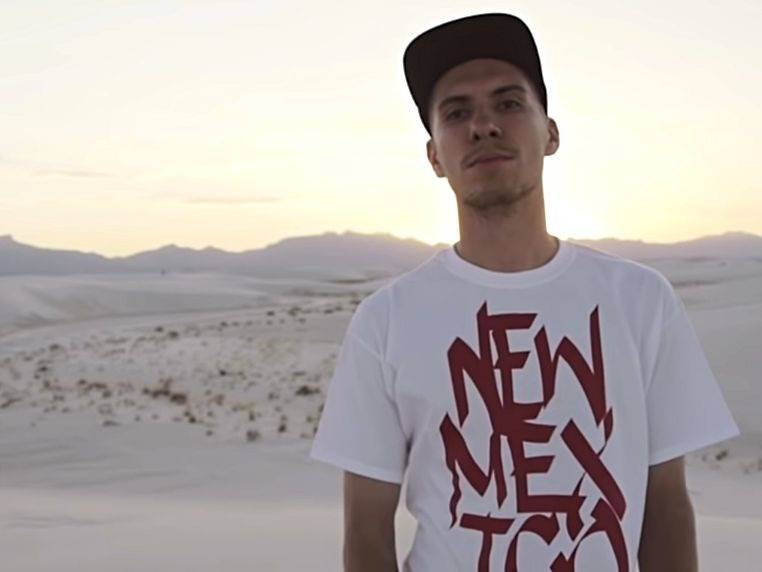 Albuquerque, NM – A community is mourning after Albuquerque Hip Hop luminary Andrew “Wake Self” Martinez was struck by a drunk driver in Santa Fe, New Mexico on Sunday night (November 3). Although he was rushed to Christus St. Vincent Regional Medical Center, doctors were unable to save his life.

The driven MC was just getting ready for his Ready To Live album release party on Thursday (November 7) at Meow Wolf in Santa Fe.

Nearly a week ago, Martinez shared his last Instagram post, being his usual reflective self and recalling how he almost died at six months old. The caption speaks volumes on his character.

“My family lived in government housing,” he explained. We had no carpet just a dirt floor, and the water quality was bad. Drinking the water got me really sick as an infant. I had to stay in Intensive care for months without going home to my family. When my mom tells me this story she says they weren’t sure I was going to make it, but when things were looking their worst a miracle happened and one of the doctors found a treatment that saved my life.

“When my mother 1st told me all of this, it made me believe in miracles. Later I learned that we are all miracles. We have this precious opportunity called life! Everyday i wake up and give gratitude for this blessing to be alive. I pray a miracle happens to you and changes the way you think and see the world. You gon make it.”

Last month, Martinez revealed he’d completed his album and was looking forward to sharing it with the rest of the world.

According to the Santa Fe New Mexican, 24-year-old Diego Alejandro Pichardo of Santa Fe faces four charges related to the incident, including aggravated DUI as well as driving with a license revoked.

Doctors told police Martinez, who was driving a silver Ford sedan, had “a very serious pulmonary contusion,” a smashed pelvis and a head injury. He also had lung injuries, multiple fractures on the right side of his ribs, a left wrist fracture, and fractures on his left and right femurs.

The passenger in Martinez’s vehicle, Kevin Allende, is reportedly still alive but in surgery.

Martinez had collaborated and/or performed with a laundry list of notable artists, including Gift Of Gab, Souls Of Mischief and Masta Ace. He often traveled the world with his longtime partner-in-rhyme Def-i and continually spread messages of positivity, hope and love.

The condolences are pouring in on social media from peers, friends and fans alike, including Masta Ace, Zumbi of Zion I, Freestyle Fellowship’s Myka 9 and Crown City Rockers’ Raashan Ahmad.

Rest in Peace to my guy @wakeself a talented MC and recording artist from Albuquerque, NM. Wake and I along with his best friend @def_i did 3 Tours together throughout the Southwest USA. Wake was the person who singlehandedly put all those shows together. Ultimately I brought Wake to Europe with me recently for an extensive tour where he opened up then sold his merch. No DJ, no hype man. He was truly on the grind. He paid his own expenses to be on that tour which illustrates just how committed he was to his craft. I spoke to him late last week as he had gotten a contract from someone and he wanted me to take a look at it. I gave him my advice which he appreciated and he told me his new album was coming soon. I have lots of great memories from those tours together. He got along well with the guys @mrstricklin @daangrymerchguy @powermalu @itspearlgates etc… lots of laughs, stupid *pause* jokes, debating hip hop. He was a great brutha and had a spiritual soul and a kind heart. He will be missed by many, many people… including me. Rest in Power. 🙏🏾🙌🏾

With sadness and disbelief a kindred soul passed away this morning. @wakeself was a dude I met a few years ago and immediately bonded with. The first night we met was at a show in Durango and he hopped up and gassed a freestyle with me. We’ve been vibing ever since. We did a few tours and a gang of shows together…and the dopest thing was all the building we would do during the long drives. A kindhearted and intentioned spirit..this brother had a lot more to accomplish in my opinion. But the Most High knows best. Prayers up for all his family and friends. This one hit me sidewise..as we were planning on hitting the road again in December. This life is fragile. Let us spend our time loving those we care about and enjoying the grace that God has provided us. Rest In Peace Young Andy..until we meet again 🙏🏾🔥🙏🏾🔥🙏🏾

Damn. This really messes me up. I just learned that Andrew Martinez aka @wakeself passed away. Such a beautiful brother who I got the pleasure of knowing more since I moved to New Mexico. We went on a tour of the southwest a while back with @def_i and these brothers welcomed me into the hip hop community in New Mexico and showed so much love. The passion he showed to this hip hop culture and the care and love he put not only in his music but his community inspired me so much. Plus just a good dude who repped New Mexico with so much love…R.I.P brother.

RIP, Andrew. The music and inspiration stays, but gone too damn soon. https://t.co/iMDwVcxtPL

Over a year ago Wake had come to me asking if I would design a potential album cover, he wanted something alluding to the divine inspiration of the feminine voice. .. attributing the muse of his work to the strength of women in his life. … when it came time to take his photo, Andrew was surprisingly a bit camera shy, so I suggested taking some video, talking and reciting some bars so we could get a more natural gate from a still… a rare opportunity to interview a friend, casual and funny and a memory I’ll cherish .. he spoke of all the things dear like his Mom and his love for music . …I don’t know why God takes some early, you were a blessing I’m happy I knew you in this life hope we meet in the next … love prayers and condolences to his friends and family 🙏🏾❤️ #wakeself

. Damn. Just found out the homie Wake Self just passed away. . Our condolences go pot to his family. If you’ve never heard his music, I suggest you peep it. He was in the process of dropping new music. . RIP @wakeself

11.05.2019: We are never guaranteed a new day, so when we are able to greet that first hint of daylight, feel blessed. A young Indigenous man is starting his journey to the other side today. A few months ago, a group of young artists (poets, writers, activists, hip hop rappers, multimedia gurus) were in Ignacio to inspire and guide some middle and high schoolers as part of a weeklong multimedia camp. That week, a few of these artists came to the weekly sweatlodge I attend. As we were sitting outside the lodge and waiting for ceremony to start, I talked with a young man. For 20 minutes, we shared so much with one another about the highs and lows of navigating this path of being Indigenous. To hear from him how he uses music and his lyrics to convey a message was beautiful. Once again, I go back to my mantra, music is medicine. I shared with him how that phrase is tied to my identity, my ceremonies, and my ways of being a Navajo woman, and explained that in his own way he is a healer like all the music makers, young and old, of the world. A few days ago, that young man was fatally injured in an automobile accident. For his brief time on Mother Earth, he made his mark. He is physically no longer here, but his music, his lyrics, his poetry, is here for time immemorial. Cherish the blessing of a new day. Give thanks to those who bring healing and compassion. Ugh, got some idiot in charge who contaminates everything with his flaccid existence, yet we lose the ones who matter much too soon. There is a lesson in this. Meanwhile as always be grateful for the new day. Honor your existence. 🌈💞✨🔥🌊🏞️🌬️ . . . . #wakeself #warriorway #musicismedicine #indigenousresistance #navajowoman #apachewoman #blessednewday #everydayisagooddaytobeindigenous #honoryourexistence #ceremony #prayerinonehand #arrowheadinmyotherhand