#DXCLUSIVE: Producer BRYVN Discusses His Motivations & Working With His Idols 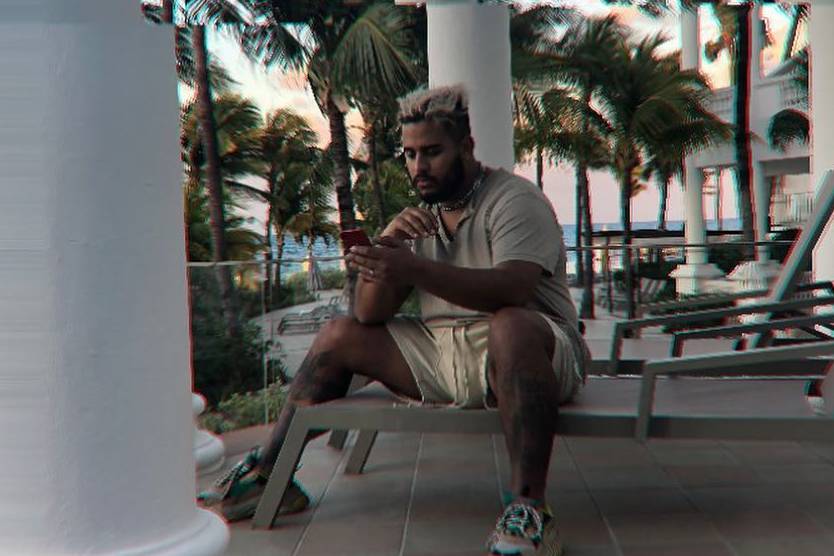 Sacramento, CA – 2019 has been a whirlwind year for 25-year-old producer BRYVN, who has landed production placements with Trippie Redd, Juice WRLD, and Chase B in the last 12 months. Raised Bryan Yepes in Miami, BRYVN considers himself a Los Angeles native as he explains, “Los Angeles is where I found who I was, where I found my passion in music.”

Now four years into his production career, the Sacramento resident spoke to DX about his metal band beginnings, collaborating with some of his biggest influences, and how being a family man has led him to work harder than his peers.

HipHopDX: What was your first experience in the music industry?

BRYVN: I moved to L.A. when I was 15. I was in a metal band. We toured, starting when I was 16. That’s really where my passion for music started.

HipHopDX: What band was it? What was your role?

BRYVN: It was called Breaking the Chains, I was a guitarist. I played a few shows with a few other bands, but just as a fill-in. Touring is hard — lots of guys couldn’t always make it.

HipHopDX: Were you classically trained in terms of music theory?

BRYVN: I initially took a few classes, but picked it up naturally from there. It’s definitely a lot of theory, learning how to read the charts and notes. It was an interesting process — once I had the basics down, I started working by ear. When it comes to beat-making, I think some do it by ear, some do it using music theory. I have a good blend of both, but I prefer working by ear.

HipHopDX: Right, I think it’s rare these days that someone reads music, since everything is so digital.

BRYVN: Yeah, there’re a lot of short cuts and cheat codes now. I like those, but it’s cool to know, for example, that [note] A can go to B whether its major or minor. To know the theory makes it much easier. But at the end of the day, if it sounds right, it sounds right.

HipHopDX: Do you still use those guitar foundations now? Or what is your creation process?

BRYVN:  I start with the melody. I usually have my guitar next to me, and I start by playing on my guitar and if I like how it sounds, I transpose it to keys. Not all the time does my guitar stay in the melody, but 8/10 times it would.

HipHopDX: You were in a metal band and now you mainly produce Hip Hop. Is it a big change, or have you always been a Hip Hop fan?

HipHopDX: Do you feel like you learned a lot that you apply to this day?

BRYVN: I learned so much. So much of what I did back then, I apply to my producing career. Especially when it comes to networking and stuff. I used to work on the booking and management stuff for the bands. Making sure we got paid at shows, talking to the right people. Just the business side of things.

HipHopDX: I’m sure understanding the business helps with getting placements now.

BRYVN: I think in music, people learn a lot from wasting time — they learn what works and what doesn’t work. So when I left the band and was ready to start my own brand, I had all this experience to go off of.

HipHopDX: How did you transition from being a guitarist, to production? How long have you been focusing on production?

BRYVN: When the band broke up , I went to school for audio engineering because I liked the idea of recording. I had a really good internship in Fremont but I hated it, so I started researching other music roles. I was a huge Drake fan at the time, this was when What A Time To Be Alive came out, and I started reading into Boi1da, 40 [Noah Shebib], researching their roles in OVO. I started looking into production and realized I kind of did that when I was scoring music in a band. I didn’t know how to play the keys yet, but my wife taught me a little bit. I worked at it and progressively I start getting better n better. But I’d say the biggest key was the networking aspect. Once you meet one person who’s going to give you a chance, it takes off from there.

HipHopDX: So that being said, what was your first song? How did that come about?

BRYVN: One of my first placements was K. Forest’s “O.N.S.” But it’s funny — that song was on my hard drive for a year and a half, and I didn’t even think it’d get picked up. Many songs come to fruition a long time after I first create them. That’s been my process: I spent the first two years or just building [relationships] and sending out my music, it was a lot of trial and error. It’s like planting seeds and waiting for them to blossom. On the third year, now, it’s been a huge blessing, it’s been a huge blessing.

HipHopDX: What do you think is behind all the success you’ve had this year?

BRYVN: I have a wife and kids and that’s who inspires me to work hard. I want to make sure my family is set up well. My daughter is why I stay up till 3 am, 5 am, working. That is what it’s all for. Also, PJ Escobar, my manager, helped me out a lot. It’s important to have a mentor show you the ropes. PJ’s been with me since I was trash. *laughs* He takes care of the business stuff so I can take the role of creating. PJ, and also G-RY, my other manager. G-RY also helped me develop as a producer and overall maneuvering in the industry. Those two people that have a big role in my success.

HipHopDX: Would you say Drake and the OVO crew are your biggest musical influences?

BRYVN: Definitely Drake is top 3. The Cactus Jack team, Drake, and Post Malone. Across those three artists, it’s a good variety, [musically] they cover everything that every other artist is trying to cover.

if you know, you know 😶🔒 @postmalone

HipHopDX:  You mentioned Cactus Jack and I know you collaborated with Chase B for his first single, how did that come about?

BRYVN: I ran into Chase B at the Sacramento airport. I approached him and told him I’m about to go to Astroworld, the show happened to be that night. I told him I produce music and we obviously had a lot of mutual contacts already. He asked me to send him some music and I took his number, then didn’t hear from him for a whole month. I had sent him like 5 beats and I was definitely persistent in hitting him up. I thought maybe he gave me a fake number. I was thinking, “If this is real, this is insane — Sacramento isn’t that kind of place, for music. So to run into him there felt crazy.

BRYVN: Yeah, so one day I texted him, “If you don’t like these beats, I also produce melodies,” so he had me send those. A month later, he called me and let me know they used my melody for Mayday. Since then, I’ve been working heavy with him on his album. There’s a lot coming out with me and Chase and that whole team.

HipHopDX: Who else would you like to collaborate with?

BRYVN: Man, everybody. Travis, Drake, Post. I really want to work with Bad Bunny and J Balvin, Selena Gomez, Justin Bieber. I like the Latin wave, I like pop. There’s a lot I want to do. Not just trap.

HipHopDX: What sets you apart from the average producer?

BRYVN: I’m known for melodies. I think that’s the beauty, melodies allow you to be diverse, though drums play an equally important part. But I can do anything — not just melodies. It’s like art. You have to think of it as a very, very, very, clear canvas.

HipHopDX: Do you work on music every day?

BRYVN: Yes, definitely, I try to create every day. Even if it’s not music, I’m always making plays, sending out emails.

HipHopDX: Other than your work, what projects that have recently come out are you a fan of?

BRYVN: Astroworld was huge. A groundbreaker when it comes to sound. Lately, I’ve been listening to a lot of Chris Brown. I just saw him live. And I also like Drake’s Care Package. Seeing how ahead of the average sound Drake has been through the years is very inspiring. I think Roddy Ricch is special. I expect a lot more coming from him. Summer Walker, too. I’ve been a fan since she had Drake on the remix.

HipHopDX: What do you have coming up?

BRYVN: I just dropped a track with SASH. I have a lot coming out, I can’t really speak on it. But it’s going to be a great 2020 for sure. I’ve also been working with Hit-Boy, G-RY, OG Parker, Smash David, Lex Luger, Vinylz, O.Z., Chase B, Sevn Thomas, London On Da Track, and more.

Track #12 “Prada Process” by @guapdad4000 ft @6lack on his new album “Dior Deposits” is OUT NOW ! Produced by @jamesadelgado @frankiexy_ and yours truly #BRYVN 🌙✨