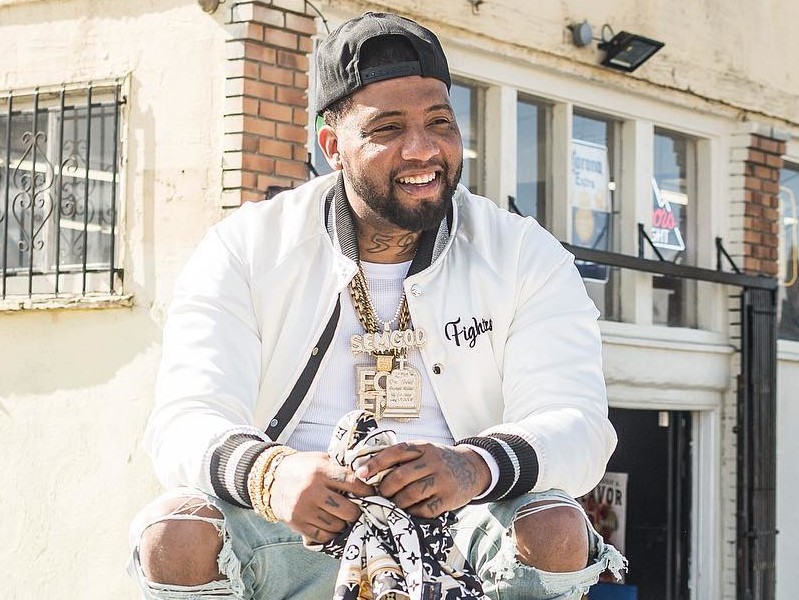 West Hollywood, CA – Over the course of Philthy Rich‘s 10-year rap career, the self-proclaimed East Oakland legend estimates that he’s made millions from music alone as an independent artist and it’s not hard to believe.

Philthy is one of the most consistent acts coming out of the Bay Area. He’s pushed out over 50 mixtapes in the past decade, including his latest release Big 59, named after his block.

“It represents the hood and Sem God,” he explains to HipHopDX over champagne and lobster pizza at Berri’s Cafe in West Hollywood. “It’s being a God where I am from. We all Gods, kings and queens.”

His 30-track LP Big 59 boasts features from fellow rap artists such as Iamsu!, Skeme, ALLBLACK and OMB Peezy, among others.

One frequent collaborator missing from the lineup is Mozzy, whom he’s been in a cold war with for nearly a year due to “politics” concerning the Internal Affairs rapper’s relationship to San Francisco icon, Messy Marv. The album’s title track, “Big 59,” also happens to be aimed at the Sacramento rapper, as a result of a collection of diss songs they exchanged between each other, including Philthy’s “Don’t Forget” and Mozzy’s “Chill Phillipe,” last year.

“When everything went down, it took me to have to reach out to him, like, ‘Bro, what’s going on? What is all this? What’s going on?’ I know where it came from,” he explains. “I still have the conversation from him in a text message but I just ain’t never put it out there. I think sometimes people make the wrong decisions.”

As for if the two will ever reconcile, the answer seems to be up in the air. For now, it appears Mozzy has chosen Marv over Philthy.

“We haven’t talked or seen each other since then so I don’t know,” he says. “I don’t take it threatening. I’m really not too much worried about it but salute to him. I wish him much success. We just gotta agree to disagree.”

Nevertheless, Philthy loves his hometown. He constantly gives back to the city that raised him with philanthropic programs such as his 100 Red Bottoms Giveaway, blessing students who have earned a 3.0 GPA or higher with a pair of Christian Louboutins and a backpack for the upcoming school year. He’s also known for his turkey giveaways during Thanksgiving and toy drives during Christmas.

Giving back to his community is a big part of who he is and so is being an entrepreneur. The 36-year-old rap vet has his own cannabis strain called Killzone Gelato, runs Royalty Salon out in Vallejo, California, breeds English Bulldogs and owns Las Vegas-based clothing store, Hood Rich.

I will always bet on myself

Being an astute businessman hasn’t always been easy, however, and like most entrepreneurs, Philthy took a few misfortunes to the chin in order to win big.

“I take losses all the time, just dealing with different bitches and businesses,” he says. “I took a loss when I opened my clothing store. I invested my money into it and it was shut down the day after opening. I couldn’t open the doors for six months and I was fighting to get it back. I had to get a lawyer.”

Unfortunately, someone got robbed at his store the day of opening and authorities accused him of having something to do with it.

“Why would I rob somebody at my store?” he asks rhetorically.

His answer to overcoming adversity is to stick it out and never quit, which has been fundamental to his longevity.

“There have always been times that I wanted to not go so hard or focus on music, do different things while dealing with different businesses, family, and getting discouraged at times,” he recalls. “I’m sure every artist has, but if this is something you love, you stick with it.”

“I feel like just working, staying consistent, always working, never being content, keep going hard and keep putting out good music,” he adds as a reason to why he’s remained resilient over the years.

Though he doesn’t like to pick favorites, he points out the most meaningful track on Big 59 is “Amen,” which was filmed in front of The Marathon Clothing store, where the late Nipsey Hussle tragically lost his life in March.

For him, transitioning fully into music happens to be one of his biggest financial risks.

“Giving up the streets and focusing on music was a big risk because you have to fund music,” he says. “You have to pay for things in a certain way however you get to the money, then me realizing, ‘Okay, I’m done with that, I’m going to do something better and hopefully, this could put me in a better position.’ That’s a risk right there because you might get in music and flop or you might take off. I might have been making more money doing that than this. The transition is crazy.”

While artists, such as Tekashi 6ix9ine, are using the hood as a novelty feature in order to gain clout coins and run up a bag, Philthy points out real ones from the hood want out — not in.

“When you’re really not from the hood, it’s going to be exposed,” he says. “You can then try to use it and promote it but the real hood niggas they want to get out, they don’t want to stay in the hood forever. If you want to use it or promote it, or pay people to say you’re from here, or protect you, or be in videos with you, that won’t last so long. It’s not going to make everybody happy. When you ain’t genuine it’s going to be brought to the light.”

Growing up, he didn’t have much. He remembers always having to share a room with his brothers, which to this day drives his undying motivation to strive for more.

“I just want to keep branding myself to become a bigger businessman,” he says. “I see myself doing everything on a major level, whether it’s signing to a deal or buying the whole block, I’m just going to keep aiming higher and higher every time. I might go buy an apartment complex and rent it out. Everything is bigger to me because when you come from nothing and you didn’t even have your own room growing up, for you to buy an apartment complex and rent it out…”

There is no end goal for Philthy Rich because he wants it all. Big 59 is merely a means to building the legacy he’s currently leading right in his own community.