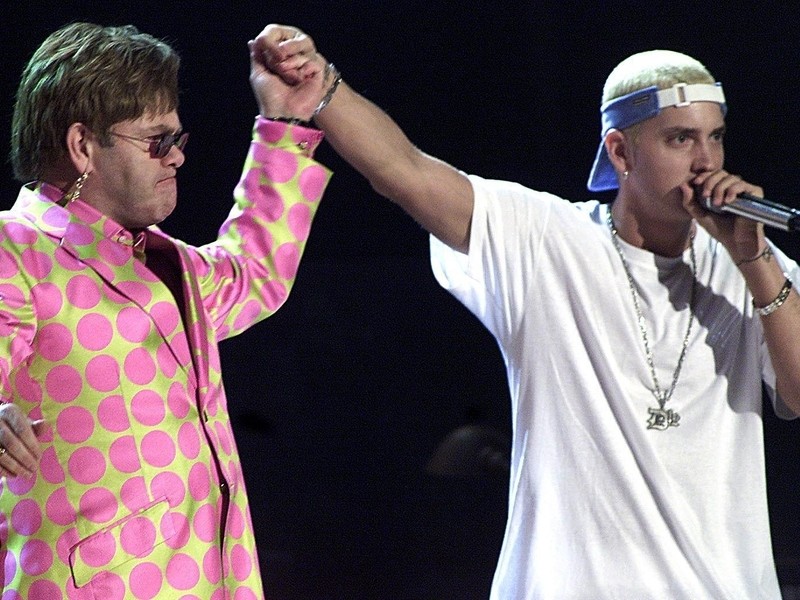 Elton John and Eminem have a long history peppered with plenty of controversy. In 2001, they shocked many in the gay community when they did a duet of “Stan” at the Grammy Awards — despite the backlash The Marshal Mathers LP received for its homophobic lyrics.

Ultimately, the two became good friends. In fact, John has been one of Em’s biggest supporters along his recovery journey. When John officially married David Furnish in 2014 (they had already formed a civil partnership in 2005), Em sent the happy couple sex toys as a congratulatory gesture.

During a recent interview with The Guardian, the rock icon was asked if he’d used the salacious wedding gift.

“Ah, no,” he replied. “Eminem bought me and David matching cock rings when we got married. That was his gift. They sit there, like the crown jewels, in this beautiful box on satin cushions. They’re wonderful to look at. I don’t know if any guests we’ve had have used them. God, I hope not. They’re kind of sacrosanct.

“The fact they came from Eminem makes it even better. It’s very him, as is this question. I call him up every couple of months, and every time he picks up the phone he says the same thing: ‘Hello, you old cunt, how are you?’ Justin Timberlake says the same thing, actually.”

Following Em and John’s Grammy performance, the two held one another’s hand as a symbol of unity. But — in true Shady fashion — Em didn’t exit the stage without flipping off the audience first.

Revisit their performance above.