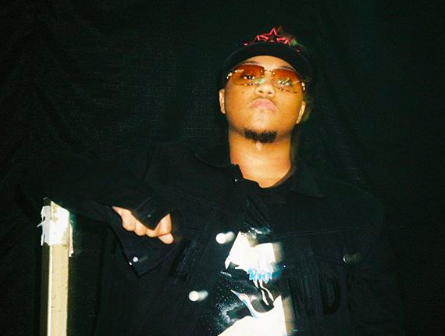 Landstrip Chip is a multi-talented singer/song-writer out of East Atlanta, Georgia who has written and worked with the likes of Usher, Tinashe, Gucci Mane, and Quavo before focusing on a career as a recording artist himself, dropping his first full length mixtape, My Point of View: Reloaded in August. The project is a re-do of his May 2018 From My Point Of View.

“When I first met with Def Jam they expressed a lot of interest in reworking some records from the project. I already had it in my head that I wanted to do a part 2 of the series. So naturally, doing a “reload” of the original project was the right thing to do,” he tells HipHopDX of the remake.

We caught up with the 26-year-old singer/ songwriter to discuss his latest work, music industry trajectory, and future projects.

HipHopDX: Let’s start on the first page: How did your interest in music start, how long have you been pursuing music?

Landstrip Chip: My interest in music started when I was four.  My mom bought me a snare drum kit, and I used to play it so much, I busted the end of the snare drum eventually. (laughs) That first sparked my interest, and from there, just growing up with my mom listening to Sade and Parliament, my dad listening to Snoop Dogg.

HipHopDX: And that’s where your versatility came from?

Landstrip Chip: Yeah, my versatility, my appreciation for all types of music came from that.

HipHopDX: When did you start pursuing a music career?

HipHopDX: And your family is happy that you’re in the industry.

Landstrip Chip: Yes, for sure. At first they weren’t, but now that my mom has seen me on TV for the first time, she gets it more. *laughs* That was a good moment.

HipHopDX: You’re from Atlanta, where there’s obviously significant Hip Hop wave. As you came up in your career, were any of those artists (Gucci Mane, Migos) your influences?

Landstrip Chip: Well, me and Gucci and OJ the Juiceman, are all from the same neighborhood—East Atlanta. So those are all people I was listening to growing up, before they were big. But all those artists I grew up listening to as a kid—Earth, Wind & Fire, Charlie Wilson, Sade—the R&B stuff, that’s my biggest influence.

Landstrip Chip: Not at all. I’d call it “The New R&B.” It’s a melody, but it includes catchy lyrics, punchlines. Overall, I focus most on the melody. I get the melody down, then I come back and fill it in with words.

HipHopDX:  You’re a songwriter, but you just dropped a mixtape. How did you transition from songwriting to rapping?

Landstrip Chip: I was actually focused on my [solo] career before I became a songwriter. Songwriting came later, it kind of fell in my lap.

Just Imagine How Crazy These Songs Sound Tho.. @tydollasign 🤐🤧🤒

HipHopDX: That’s okay, who’s your favorite artist to work with?

Landstrip Chip: Ty [Dolla $ign] is easy to work with and we have many similarities. He’s a good friend of mine. Usher is cool to work with. H.E.R. is cool.

Landstrip Chip: Yeah, before I met her, I thought she’d be shy, but once I met her, we had a couple conversations and she was totally the opposite of what I was expecting.

HipHopDX: Who haven’t you worked with that you’d like to work with?

HipHopDX:  Do you think Rihanna is ever going to get back into the studio?

Landstrip Chip: I mean, I know some stuff other people don’t. *laughs*

HipHopDX: Back to the new project: I know you have TK Kravitz on it, Kap G, how did those features come about?

Landstrip Chip: The Lil Baby record (“Thumb”) is the only one that I did and was thinking like, “I need this on the album.” As for the other ones, we were just in the studio and it happened in the session, just naturally came together.

HipHopDX: Is the “Thumb” (featuring Lil Baby) your favorite on the project?

Landstrip Chip: That’s the one getting the most traction right now. For me, it’s top 3. My other favorites are “Smoke Clear,” and then “1500.”

HipHopDX: When you’re recording your own music, do you freestyle, or do you write it ahead of time? What’s your process?

Landstrip Chip: I freestyle 95 percent of the music I make. Sometimes, one of my producers sends me a beat and I catch a vibe to it, but i really don’t like to listen to beats when I’m not in the studio. That’s because how I work, I go off the first vibe I get. If I don’t like the beat after first 15 seconds, I go to the next one. I go with the first idea that comes to my mind. I don’t really write music though, like I don’t write down lyrics.

HipHopDX: I feel like a lot of artists tell me they freestyle these days. Now, you’re with Def Jam, did you intend to sign with them, specifically?

Landstrip Chip: I’ve been with them since July of last year, I had dropped a project [From My Point Of View] and people from the label heard it and reached out to me. I had a couple other labels interested, but I felt most comfortable with Def Jam, so that’s how I made my decision.

HipHopDX: Where does the “Landstrip Chip” name come from?

Landstrip Chip: “Landstrip” comes from being fly, wearing fly clothes, being on the go. At first, I was calling myself “Chip” but there were a couple people in Atlanta also going by that name, so I needed something to diversify myself. People always tell me that’s a memorable name.

HipHopDX: It is. Speaking of fashion and stuff, is that another thing you’re into?

HipHopDX: Other than music, do you know what else you’d do?

Landstrip Chip: If I wasn’t writing or recording music, I don’t know what I’d be doing. After I was 16, 17 years old, there was no Plan B for me.

HipHopDX: Do you feel like there are many goals you have yet to reach? How do you see your journey unfolding?

Landstrip Chip: I think I take everything to heart. I’m appreciative of where I am in my career. 5 years ago, I wished I was doing the things I’m doing now. I’m happy but definitely not content. I know there’s a lot of room for improvement and many goals to reach — I have high expectations of myself and people around me.

HipHopDX: Are you back in the studio working on another release?

Landstrip Chip: I never stop going to the studio, I have hundreds of unreleased songs. Its’ just about putting them in order, picking my favorite ones, putting them out. Not working on anything specific, but definitely more on the way.

When I was a kid I used to fake perform with the TV remote control in my mirror.. I use to loop my Apple headphones behind me ear like they was in ears.. I been prepared for these type moments! 10,000 people? NO FUCKIN SWEAT 😈

HipHopDX: Do you plan on going on tour anytime soon?

HipHopDX: What would be your dream tour lineup?

Landstrip Chip: Dead or alive? I would probably open up the tour, then it would be Ty Dolla $ign after me, and then Marvin Gaye or Prince. Prince is like a musical genius. I was just in the truck listening to Marvin Gaye and I forgot how good his music was.