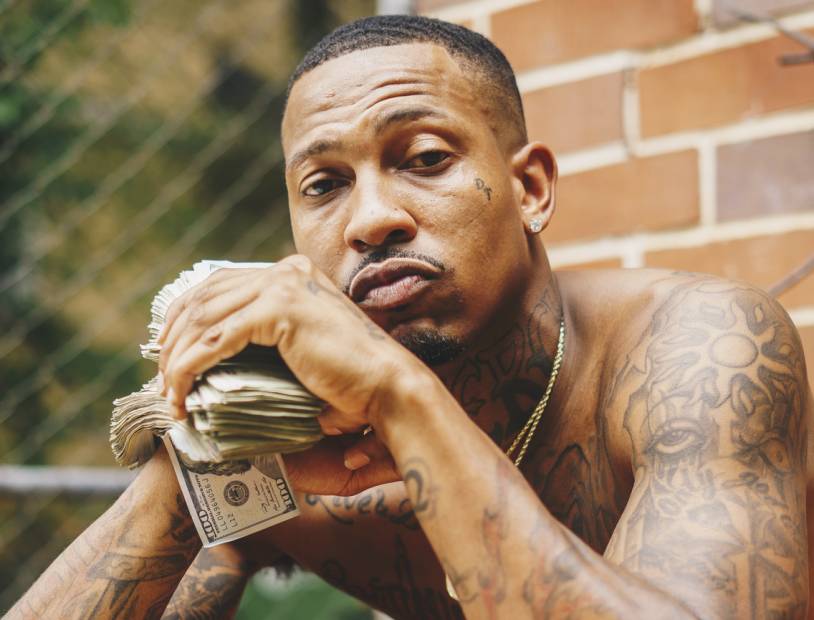 Atlanta, GA – With a name like Trouble, you’d expect nothing but the worse. But for a decade strong, the ATLien born Mariel Orr has been letting his reality raps spill into living motion and boldly accepting the consequences and commendation along the way.

While sitting with HipHopDX, Trouble reveals how he ended up signing with the legendary Def Jam Recordings and the only two rap legends still on his radar.

HipHopDX: But that being said, I mean a lot of people just see you like popping now and everything. But, I mean, I don’t think too many rappers have the grind for this spot.

HipHopDX: Was there any time you almost like said, “fuck it” and hung it up and quit?

Trouble: Shit, ain’t no almost. I did for like two years. I stopped doing shit. Period. That was that long period where folks wasn’t seeing me doing shit. Like, not putting no songs out or nothing. Like, if a couple songs did get throwed out it was just some DJs who already had them and they just started downplaying stuff. But for like two years, man, I wasn’t stuttin’ that shit at all, dog. I just got frustrated with the politics and all that shit, how you got to play the game. I wasn’t all the way ready to make that transition yet for the things you got to do in this shit.

HipHopDX: You put in the work. But, did you have like bad contracts?

Trouble: Interscope was actually my first time being signed. When I got with Interscope like a year and a half ago. So, the whole while, it was just … I was putting in my own gotdamn work. I was never signed to nobody. The Duct Tape shit … that was my family. All of us come from the hood together. They snatched me up when I was on the run, actually. Like, a year and a half to two years before I went to prison. That was family business right there. So, the whole while it was like … and then even as we got it going on, them niggas got to a point where they was like fuck this shit, too. Like, nobody was stuttin’ no rap.

And, I was still ready at that point to keep putting the work down. So, as I was dropping them tapes; the All on Me’s and all that shit, dog. Like the Skoob Fresh. I was on my own with that shit!

HipHopDX: I feel it. Well, hard work pays off. Here we are. Def Jam. Were they on your radar? Did you approach them? Were you doing the whole meeting round?

Trouble: No, they actually end up coming for me. It was a thing to where my dog Mike Will [Made-It], he actually was the first one who brought up the conversation. It was between Def Jam and another label I don’t want to say. But, he was like these two really been on my line about you, dog. He was just like, they real adamant about that shit, bro. I just know how you is right now, so I know you going to want to see them folk and talk to them.

I was like, hell yeah. I ain’t just going with no anything. I know what the interest might be with these certain labels and all that shit, what they may have done for other artists. But, you know, everybody different. So, I was like, man let’s go up there.

So, I actually ended up going to New York. They flew me up there, we had a sitdown. And after I was able to just sit with everybody face to face from the head honchos all the way down to the intern. It was just a bool feeling, and it just was great vibes. And, it just felt genuine. So, for me, I was like, man, shit, let’s do it. And they was talking about everything I was talking about. They was ready to put music out whenever I was ready to. Asking me what was done. When did I want to put shit in. It was no rush about no nothing. So, that was when I ended up going with that situation. Just recently, probably a couple months ago or what not. And, every since I was locked in with them, they just been pushing the button.

HipHopDX:That’s super lit. What does Trouble’s debut album on Def Jam look like? I mean you done already gave us the story from the root, and then December 17th and shit like that. What are you introducing to the world now that you got this platform?

Trouble: You know, I don’t want folks to be confused because you know the single is going crazy right now. As far as the one with the City Girls. But, at the same time, I want folks to know it ain’t fixing to be like a nigga just on a bunch a partying shit. Every day a nigga still dealing with real-life situations and shit. And, it’s still up out here in the streets, so. But, it’s going to be more well rounded.

Trouble: This the idea what we working on right now. For them, [Def Jam] was ready to put that muthafucka out the next day, the next week. I was like, no I ain’t put nothing out in like a year and some change, dog. I just wanted to give these folks a chance like to build up what a nigga had. Like, start putting the music out. Put a couple singles out there. And, then get to the point of where I was coming with the album. So, it’s still going to be them struggle songs. It’s still going to be that motivation for the young niggas coming up, trying to make it out.

It’s shit on that muthafucka for the ladies. Whether it’s that sentimental tip that’s telling them how to keep their head in the game. And, it’s some on there for the ladies as far as for them to ride and party to. It’s just all the way around the board. And, like for me, I feel it’s going to be the hardest shit I’ll ever put out.

HipHopDX: I think you might have won a pool party headline this year.

HipHopDX: Is this going to be an annual thing? Is this something you can brand?

Trouble: I actually been throwing pool parties for the last couple years, but it was like the third one. But, I just feel like, I don’t know, it’s was just more eyes on me now. So, it ended up being broadcasted more or whatnot to where folk actually seen how it be going down at my shit. But, it was actually the third one. So, I be throwing one every year. The same way I take my whole gang to Miami and we be doing yacht parties out there every year.

And you know it’s definitely going to be another one next year. Ain’t no telling what going to pop at that muthafucka.

Trouble: Big facts! Folks already been hitting a nigga, like can I order … go on ahead and let me order some tickets for next year. (Laughs) But, they ready for me. That shit gon be crazy.

HipHopDX: Now, with all the new eyes on you, are you worried that every single thing that you do with Alexis [Skyy] going to be scrutinized and Love and Hip Hop for the Gram? Are you having to change your moves?

Trouble: Somewhat, truthfully. But I don’t worry about shit, especially because I already be expecting it. I already be knowing that at the end of the day you going to have half of these muthafuckas who going to love you. They already genuinely know you and know how you coming. And then you got muthafuckas who don’t know a bitch ass thing about you, nothing at all. So, they going to voice their opinions as far as what they spectate from a glimpse of anything. Ten seconds of whatever. So, I don’t let that shit be getting me. I don’t give a fuck! I know them same who might be talking shit or say some shit. On the ground, they see me they going to run the other way or ask for a picture.

HipHopDX: Lastly, now that you’re on Def Jam do you think this will open up for some more collaborations? Do you have like a bucket list of rappers that you want to go toe to toe with?

Trouble: The only nigga I’m missing that I ain’t done nothing with that I wanted to do something with when I came home, dog: I wanted to link with Boosie [Badazz] and DMX. And, Boosie done became like my big brother. Went from being my idol to my big brother. So, we about to cop … we actually working on a mixtape together. But then DMX is the only nigga I’m looking forward to meeting. It don’t even got to be no music shit. I just want to chop it with that nigga because he spoke for me when I was a young nigga. So, that’s what I was on. But if it was to get to some music, then I know we would go AWOL together.

Trouble: Flesh of My Flesh, Blood of My Blood.

Trouble: I still be on it to this day, my dog. Yep.