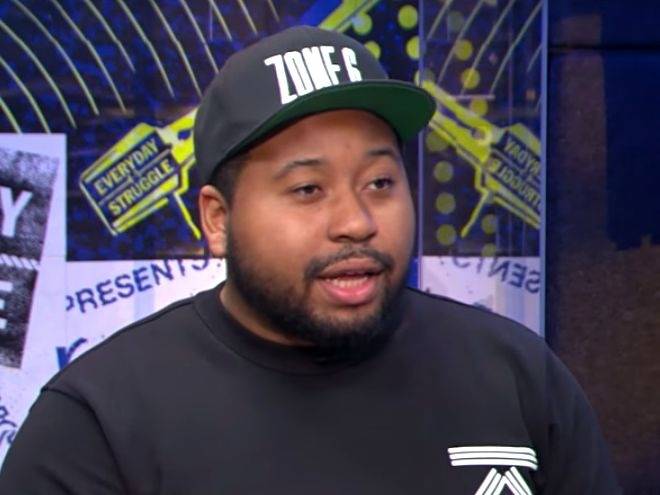 New York, NY – Akademiks has blown the lid off a heated social media exchange with Nicki Minaj. During Tuesday’s (September 10) episode of Everyday Struggle, the outspoken co-host revealed Nicki threatened him in his DMs and accused him of wanting a sexual relationship with Tekashi 6ix9ine.

Akademiks initially spoke about the DMs during a Twitch session.

“The people you rep won’t be able to stop your jaw from gettin’ broken,” Nicki wrote to Ak. “I know too much about your family for you to be playin’ with me, you hoe ass. Where you at now?”

Ak responded with, “Your threat is well received lol. Well c each other at some point I’m sure. Take care, babe,” to which Nicki said, “Exactly. Hoe. Still sad Tekashi ain’t here no more so u can try to get sneak feels on his booty. Don’t talk on a woman then run from a man. I’m glad it’s received rat. It won’t be the only thing that’s received.”

It only took a few seconds for fellow Everyday Struggle co-host Nedeska to bring up the Twitch session.

“If anything happen to me, Nicki did it!” Ak shouts.

“Is that snitching?” Nadeska asks.

“Nicki’s having a breakdown,” Ak replies. “She’s at the point where the shoe that nearly connected with her dome that was thrown by Cardi got her out of whack. She’s now threatening bloggers. I though Nicki wanted to have a conversation, or at least bring me to Queen Radio to defend … I thought she was on the brink of calling me ‘cocksucker of the week.’

“All of a sudden it went severely left. ‘Drop the addy, I’m pulling up, talk to my husband!’ By the way, when she sent these messages, is ‘thank you Jesus. I needed some content to carry me through September, carry me to December. I’m friends really with none of these rappers, I’m really out for content. I’m team me. I don’t care about the Barbz or the Cardi fans. So when she said this I said ‘thank you Jesus.'”

Ak said he went to bed and woke up to more messages from the self-proclaimed Queen of Rap calling him “Alvin The Chipfunk” and threatening him once again.

“I woke up this morning ’cause I was slumped off the Henny last night,” Ak explains. “I thought Nicki was done messaging me … But PARAGRAPHS! This one is funny though.”

He then proceeds to read Nicki’s message.

“last time I was in the studio was 69 he told me he could tell you were really hoping he was gay in real life & that you really tried to touch him in that pool. The reason you mad is due to me and him being close before he went to jail. I didn’t mean to hang out with your ‘boyfriend in your head.’ I only meant to do a dope song.

“Please post that part too Alvin and the Chipfunk. You gon be HURT.”

Although Nicki recently announced she is retiring from rap to start a family with “husband” Kenneth Petty, it appears she’ll still being operating her Queen Radio programming.