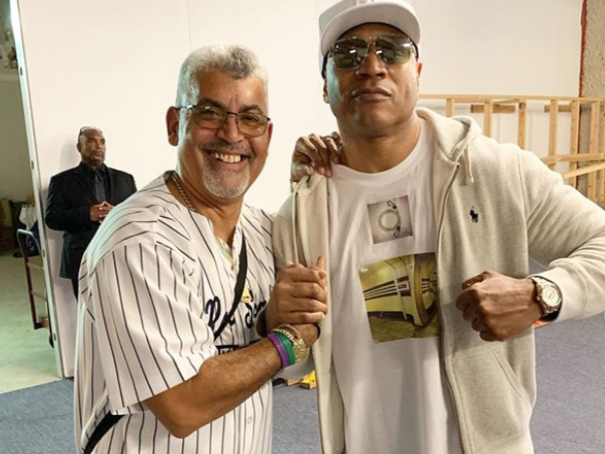 New York, NY – Bronx native Joe Conzo is not only a famed Hip Hop photographer but he’s also a a former EMT.

On September 11, 2001, he was one of the first responders on the scene as both towers of the World Trade Center collapsed following the infamous terrorist attack.

25 years ago this month I embarked on a life changing career and it made me into the man I am today. Thank you to my brother my mentor @jamelshabazz for capturing this image! #FDNY #EMS #EMT #Union #SavingLives #CivilServant #18C2 #BornInTheBronx!

As Conzo explained in a July interview with BronxTalk, he would have to endure 12 chemo sessions. In an Instagram post from Monday (September 3), Conzo revealed he was about to undergo his twelfth and final round.

“My beautiful niece @keri.connolly sending me some love for my last Chemo session 2morrow!!!” he wrote in the caption. His niece is holding a sign that reads: “Cancer messed with the wrong mother fucker.”

There’s a logo censoring part of the drawing, which is actually a t-shirt design being used to bring awareness to Conzo’s situation. Legendary b-boy Crazy Legs and pioneering dancer Popin Pete are among the many showing their support for Conzo by repping his t-shirt.

In June, talk show host/comedian Jon Stewart sat before Congress and passionately fought for the Victim Compensation Fund to be extended. He spoke alongside first responder Luis Alvarez who was fighting colorectal cancer and looked extremely ill during the hearing.

Alvarez died less than a month later at 53. Conzo, however, is determined to beat his illness.

Conzo’s work is currently part of the Beyond The Streets exhibit in New York City. Fellow Hip Hop luminaries such as Eric Haze, Cey Adams, Martha Cooper and Fab 5 Freddy are also included in the show.

His photography was also a part of the recent Contact High exhibit in Beverly Hills.

Check out the Conzo shirts below and find them here.

Nothing but Love from my brother from another @crazylegsbx !!! Thank you for all your Love and Support!! #RSC4Life #BornInTheBronx #MyBrother #HipHop #FuckCancer!

Nothing but Love and Support from my RSC brother The Master @popinpete ! Could not have made it this far without all the Love from around The World!! #Love #Support #PositiveVibes #Family #NeverAlone #FuckCancer!

Nothing but Love from my brother and phenomenal actor JW Cortes! The first person to tell me in what movie did he play a bouncer? I’ll send you a FC tee shirt #Hint interior shots where done here in Da Bronx at The Paradise Theater and the stars of the film starred in Gladiator and Boogie Nights!Repost @jwcortes with @get_repost ・・・ We love you @joeconzo – F*CK CANCER 🖕🏾

This man right here I can’t say enough about him! His contributions to Hip Hop to Freestyle Music is untouchable! His humanitarian efforts against Cancer is phenomenal! Thank you Sal Abbatiello for all your love and support! #TrueFriend #Family #Pioneer #Legend #ErikaRomanFoundation #FuckCancer!!!!