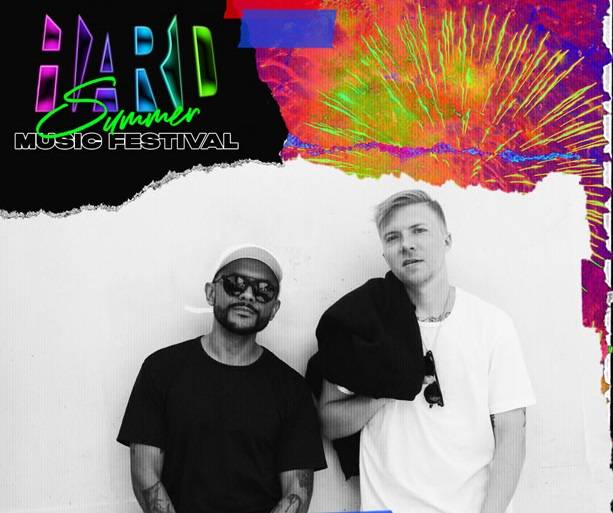 Los Angeles, CA – The HARD Summer Festival is certainly not an ordinary summer festival. Taking place from the 3rd to the 5th of August, 2019, the concert — which featured a perfect marriage of pop, Hip Hop, and EDM artists — drew attendees from all over the country. And while the HARD Summer Festival was once a Los Angeles mainstay, a 2015 ordinance against EDM concerts by Los Angeles County forced the organizers to shift their efforts eastward to Fontana, CA, about 90 minutes outside of the city proper.

For 2 Cents (stylized as 2¢), the politics surrounding the HARD Summer Festival are irrelevant, because they’re all about the party and the music. Comprised of DJs Craze and Four Color Zack, 2 Cents attribute their ever-expanding fandom to their frequent appearances at HARD Summer Festival.

“It’s invaluable,” said Four Color Zack. “HARD is so good to us — the organizers, the fans, the sponsors — and that helps us perform at our best.”

2 Cents’ performance, which was on the first day of the festival, was well-received by those in attendance. And while one might argue that their performance was “all over the place,” the duo even released a new track called “UPBQ” on the HARD Summer Festival mixtape, a calling card of sorts to advertise their performance.

“We were able to reach people we’d never be able to reach otherwise,” said Craze. “It’s more than just putting our music on the Internet and hoping someone finds it. People have a chance to see us live — to see that we’re real musicians doing real things — and that leads to more success than we could have dreamed of.”

It’s a sentiment echoed by Philadelphia-born, Los Angeles-based artist Andre Power. Power, who’d previously earned his festival stripes at places like AfroPunk and the Chicago-based Roots Soulection Showcase, said that HARD Summer Festival not only offered him an opportunity to play live to a Los Angeles-based audience, but it allowed him to play before an audience that he’d never get the opportunity to reach otherwise.

“Oh, HARD?” he said to HipHopDX exclusively. “For me, HARD is always worth it. I reach younger people, I reach EDM heads, I reach people I’d never reach if I’d just stayed in my lane. But besides the fans, I make a whole new set of connections with artists and professionals that I wouldn’t make, either. And as an artist, that helps expand my creativity and my opportunities, as well.”

Most of the attendees at the festival extolled the virtues of both types of artists — those who were fans of Hip Hop were easily “sold” on the EDM, and vice versa. And certainly, there was an air of excitement when special guests such as Shaquille O’Neal (under the “DJ Diesel” moniker) took the stage.

But for 2 Cents, it’s all in a day’s work. “That’s what we live for — to go out there and to make people happy,” said Craze. “That’s the reason we made music in the first place.”