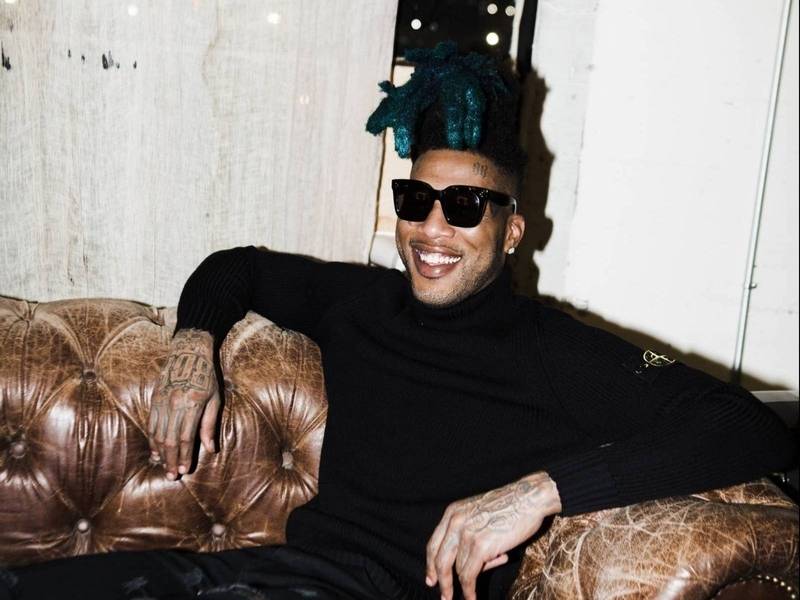 TM88 just got done working out before hopping on a call with HipHopDX to discuss his upcoming project 88 Effect and Lil Uzi Vert’s oft-delayed Eternal Atake.

“A lot of Brazilian jiu-jitsu and MMA-type training,” the Grammy Award-nominated producer said of his workout routine. “It’s kind of intense.”

TM88 fans bring the same kind of intensity when they lovingly haggle him for new music. If TM88 produced it, they want it.

In particular, listeners are anxiously awaiting TM88’s 88 Effect compilation. As one might expect from such a popular producer, the guest list is impressive.

“Young Thug, Future, Moneybagg Yo, Offset, Lil Durk,” TM88 told DX. “THEMXXNLIGHT … this one song we got, oh my! It’s for the ladies. Ty Dolla $ign, Rich The Kid, 2 Chainz, Smokepurrp and MADEINTYO.”

He added, “It’s not one of them projects where a whole bunch of artists are on one song. Some songs got a couple of artists on there together and then some are solo. [DJ] Khaled already went crazy with that, and I don’t want to follow trends. Khaled got that wave, he be killin’ shit.”

There’s no release date for 88 Effect yet, but DX did find out what fans can expect from the project. TM88 also addressed the problem with leaks and what it’s like making music with Lil Uzi Vert.

HipHopDX: What’s up with 88 Effect?

TM88: I was just listening to the project. It’s some good shit on here. I got this alternative rock song with Wiz Khalifa and a rock band that’s crazy. I just want to get the fans reactions to this different kind of vibe. As you know, I put “Slayerr” out with Lil Uzi Vert and that’s going crazy. “Order” with Gunna and Southside, and one with Lil Yachty and Valee.

TM88: I hate leaks, personally. It kills the song. The anticipation is high. Rather than wait on it and get a gem, people support leaks. I understand the way music is going now, fans are used to artists putting music out instantly. As soon as you make it, they want it … but it’s a business involved. The artist be wanting to drop! If the artist could put out the song as soon as he make it, he’d put it out. But, it don’t work like that. Leaks kill everything. “Slayerr” is doing great, but I feel like we would have charted if we was able to put it out before it leaked.

Sometimes, I feel like fans be ungrateful. It’s a give-and-take. They get so mad when you don’t put a song out, then somebody leaks it. Well then, fuck it, I’m going to give you the real version with everything mixed. I want you to hear the real shit. They keep asking to get it on Apple Music and you give them exactly what they want and they’re like, “Oh, he put out a leaked song” or “We heard that months ago.” It’s hard to gauge what they want. It’s cool. It’s just weird. Leaks make it worse.

HipHopDX: When does 88 Effect come out?

TM88: I’m hoping very, very soon. I know we keep saying that and I know the fans are tired of that. But it’s politics, so, you know.

HipHopDX: It’s interesting you say that you’re going to have a rock-type song with Wiz because I generally describe your sound as trap meets rock.

TM88: I got the trap on there and then I have the rock vibe on it. I try to put a little bit of everything for everybody. 88 Effect, I named it that because our music sends people into trances. I wanted this project to symbolize the effect you get when you go to a theme park or a 3D movie. That’s how we did the skits and the layout of the whole project.

HipHopDX: Who are some of your rock influences?

TM88: Green Day, Linkin Park, Maroon 5. This band Creed who has a song called “My Sacrifice.” That was a song I really loved as a kid.

HipHopDX: I can see how that could have helped develop your sound a little bit.

TM88: I’m kind of a moody producer. Not in real life, but when I’m doing my music, I go after how I’m feeling at the moment or how somebody else is feeling that’s around me.

HipHopDX: Now, tell me about the chemistry between you and Uzi. You guys always make next-level music together.

TM88: It’s easier for me to make beats for Uzi because it’s kind of you know … he got a melodic style, but it’s kind of rock too. I’m really good at making melodic beats. Lil Uzi’s music be real trance-y type vibes. When we get in the studio, it’s not always just us loading up beats and that’s it. No! We actually kick it for a long time before we load the beat up. We kind of forget we’re in the studio.

HipHopDX: What y’all be doing?

HipHopDX: What’s the weirdest thing you and Uzi have talked about?

TM88: We talk about like, would you want to live in the year 3088 or some shit if you could preserve your body. He feel like he can preserve his body and come back when everybody gone and still be hip to what’s going on. I’m like bro, if you preserve your body until the year 3088 and you come back and you around 18-year-olds speaking a whole new lingo, you basically like a newborn again. He feel like he can get hip to what’s going on ASAP. It don’t work like that. [Laughs] It just be stuff you think about when you high.

HipHopDX: You never know, it’s Uzi we’re talking about! What’s the quickest beat you’ve ever made?

A lot of the beats you spend a lot of time on and it be your favorite beat, [but] artists look right over it. They be like, “It’s cool.” Then you’ll play something you made an hour ago in 15 minutes and they think it’s the hardest shit ever.

But it depends. Because working with Travis Scott, we work on beats for a very long time with him. Some beats, we’ll work on for a month because we are working on the song and the beat at the same time.

For instance, Southside or someone will be making the melody and I’ll get in there and start working on the drums. Trav, he’ll be in the booth recording while we’re still making the beat. His sessions are the craziest sessions I’ve ever been in as far as learning new techniques.

He’s building the song around the beat that we’re still making at the same time. A hook will be done, he’ll cut it up loud and we’ll still be working on the beat while it’s still recording in Pro Tools. Travis is another kind of artist.

HipHopDX: Isn’t it the same with Thug too? Doesn’t he record right next to the engineer with headphones on?

TM88: Thug and Future. With Thug, we don’t even hear the beat because he got the headphones on. But when he cut it up, the song be crazy.

Future is the same kind of person. As soon as he hears the beat, he’s like load it up. Future will go to the melody of the beat or pick something he likes in the beat and cater to it for his melody. If the hi-hats going crazy, he’s going to have something vibing with the hi-hats.

That’s why Future is “The WIZRD.” I’ve never seen no artist do what Future do. You got to be in the studio with him to know. You know the artist who producers don’t mind sending beats to. I don’t give a damn, I’ll send Future 1000 beats because I already know he’s going to do all of them and then you gon’ get you some hits.

TM88: I honestly don’t know. I don’t even talk to Uzi about it. Hopefully, [it drops] soon. But the “Slayerr” video is on the way. I’m going to do something really special for that with the fans. Hopefully, they don’t go crazy on me.