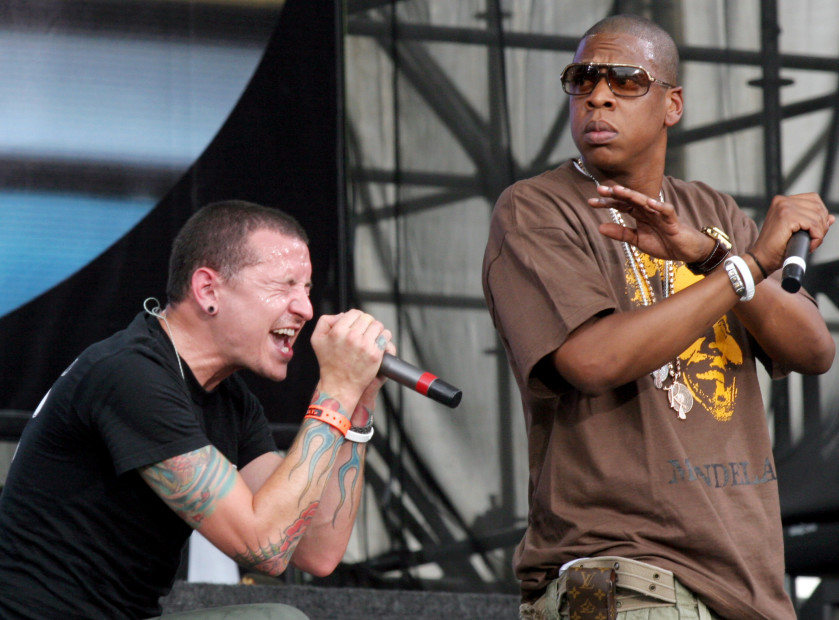 When the news broke on Thursday (July 20) that Linkin Park’s lead singer, Chester Bennington, died, I felt remorseful for the band’s longtime fans and Bennington’s family. Any time a superstar frontman passes away, memories dating back to the band’s emergence onto the music scene always rise up.

I had initially encountered Linkin Park’s music when their diamond-selling debut album Hybrid Theory was released in 2000. As I saw their TV promo ad for Hybrid Theory on MTV, the pseudo-intellectual underground rap lover in me was disgusted by the perception that another metal band was appropriating Hip Hop culture. In the year 2000 — before the power of digital downloads made the music business implode — the recording industry had raked in record profits and revenues of $13.36 billion in domestic album sales. The “Nu metal” and rap-rock (or “rapcore”) subgenres which blended hard rock, punk, funk, and Hip Hop ruled the radio airwaves. They boasted a myriad of multi-platinum selling acts at the dawn of the new millennium. Rap rock acts, boy bands, Latin pop and teenage female singers were the vehicles for MTV to cash in on their 16-to-24 targeted audience.

The rap rock explosion and rap’s “bling era” of the late nineties and early 2000s made many Hip Hop purists cringe. It enjoyed some of rap rock that I grew up on like The Clash, Run-DMC, Urban Dance Squad, Faith No More, Boo-Ya Tribe, Anthrax with Public Enemy on the “Bring The Noise (Remix)” in 1991, or Beastie Boys and their pioneering work in the genre. But I felt vindicated that the latter group’s Ad-Rock agreed on the overkill of rap rock when he threw shade at the those bands’ regimented look and sound on Beastie Boys’ 1999 single “Alive”: “Goatee metal rap, please say goodnight!”

Linkin Park arrived to the profit party; unannounced and they certainly didn’t pioneer their brand of rap rock. To me, Chester Bennington’s eardrum-splitting shrieks sounded quite similar to those of late Alice In Chains frontman Layne Staley (who had helped pioneer nu metal 10 years prior). Also, the band’s resident rapper Mike Shinoda busted some simple raps he penned in many of their song’s verses like “One Step Closer,” “In The End,” “Crawling” with their DJ Joe Hahn on the cuts. After the monumental success of Linkin Park’s diamond-selling Hybrid Theory, the California band actually gave dyed-in-the-wool Hip Hop traditionalists a reason to appreciate what they brought to the table with their follow-up remix album Reanimation fifteen years ago in July 2002.

Linkin Park did what no other rock band of their stature dared to by giving a platform to unsung heroes in the underground rap scene. The album boasted dope turntablism, formidable lyricism that would suffice in any open-mic night cipher, and polished beats with much replay value. The underground Hip Hop scene had gained some popularity at the time amidst the dominance of East Coast gangsta rap and neo-soul, but it contained for internet geeks and fans who had to hope wait for late night college radio shows to play those artists. Linkin Park gained much credibility among underground Hip Hop fans across the map for their collaborations with Pharoahe Monch, Jurassic 5’s Chali 2na, Alchemist, Zion 1, Evidence and DJ Babu of Dilated Peoples, Freestyle Fellowship’s Aceyalone, Cali Agents’ Planet Asia and Rasco, Phoenix Orion, Black Thought, KutMasta Kurt and Motion Man, and cuts from The X-ecutioners’ Sean C and the late Roc Raida. Linkin Park revealed themselves to be true fans of these underground rap champions rather than interlopers of Hip Hop.

They did a damn good job executing their vision as Reanimation became the third best-selling remix album of all time behind none other than Michael Jackson’s Blood On The Dance Floor: HIStory In The Mix and Madonna’s You Can Dance. And it certainly helped build their power with their single “It’s Going Down” featuring the X-ecutioners to show their appreciation for the art of turntablism and DJ culture.

When Linkin Park’s third album Meteora was released in March 2003, they were already a household name worthy of large billboard ads along U.S. highways and towering promos in New York City’s Times Square. The album shot up to No. 1 on the Billboard chart, and it was more of the same nu metal and rap rock sounds with hits like “Numb,” “Somewhere I Belong,” “Breaking The Habit,” and “Faint.” But one space Linkin Park didn’t tap into was the urban market. Even though the aesthetic of the underground rap subgenre preserves the core elements of Hip Hop, there is a sentiment that it doesn’t contain the grit of the streets that artists like The Lox, Diplomats, 50 Cent, Snoop Dogg, or Nas have championed. To bring Linkin Park a step further into the ‘hood, JAY-Z collaborated with the band for their seminal live performance-recorded double-platinum selling mash-up EP Collision Course in July 2004.

The lead single the Grammy Award-winning blend of Linkin Park’s “Numb” with JAY-Z’s fan favorite “Encore.” The ethereal beat with Chester Bennington’s smooth falsetto vocals and chorus and Jay’s then-swan song were a perfect marriage. The album’s blend of JAY-Z’s and Linkin Park’s song including “Izzo/In The End,” “Points of Authority/99 Problems/One Step Closer,” “Dirt Off Your Shoulder/Lying For You,” and “Jigga What/Faint” was an undeniable perfect match for both acts’ audiences. It was as palatable as Run-DMC and Aerosmith’s collaboration on “Walk This Way” off the Queens king’s Raising Hell album in 1986 for rap and rock fans to expand their musical taste.

Chester Bennington and Linkin Park were representatives of the important life period when Y2K-era Millennials attributed much of their social identity to their music predilections. There haven’t been too many bands besides them who have multiple number one albums under their belt and touched various corners within their own culture of rock and permeated into rap without sounding convoluted doing so. Their “hybrid” or metal, punk, Asian music motifs and rap grew on many Hip Hop purists. With seven albums deep in their catalog, the latter ones didn’t gain as much success as their predecessors. But in the end, it doesn’t even matter because the numbers don’t lie about Linkin Park being one of the most important bands in music history.