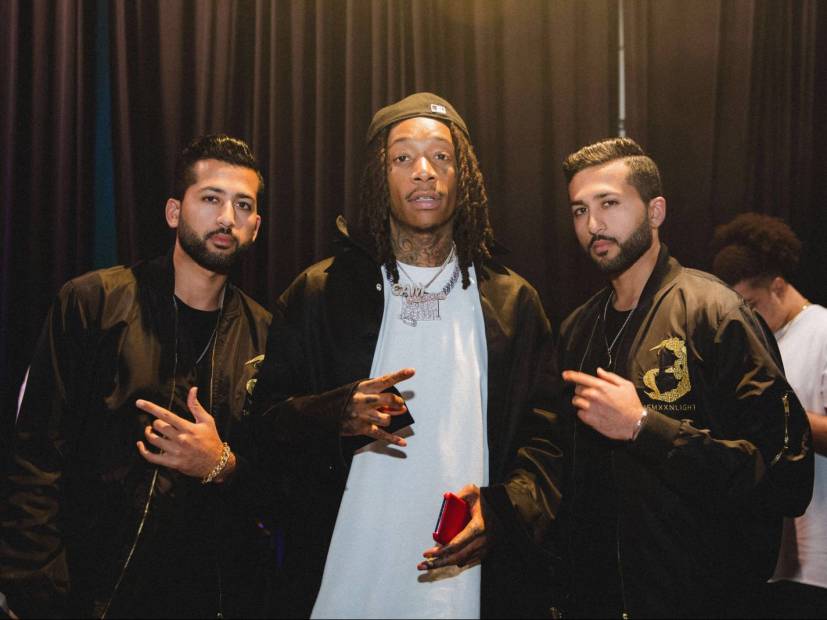 Los Angeles, CA – Bay Area Indian twins Krish, who goes by Luv, and Akash (professionally known as Kush) Chandani were merely uploading their music as THEMXXNLIGHT to their SoundCloud as a side hobby when Taylor Gang’s Sledgren stumbled upon their modest profile.

Though it was understood to be a hobby, Kush and Luv were certainly deliberate about their artistry upon discovery. Pressures stemming from the Indian community begged that they swap out their Hollywood dreams of singing and playing basketball for an engineering degree.

Rolling Loud was a movie 🎥 🌙

The 23-year-old identical twins opted for both by enrolling at the prestigious Rensselaer Polytechnic Institute, where they also balled.

“We got recruited to play basketball for college but during that process, all the Indian parents around us would be calling our parents and telling them to take us out of sports and not let us do this and to focus on school and academics,” Kush told HipHopDX in an exclusive interview over the phone.

“When we got to college, a really good college called RPI that’s No. 4 in the world for engineering, that was our main focus,” he continued. “When people found out we started making music it wasn’t taken lightly at all. Our parents told us to keep it as a hobby and to focus on our engineering. All the other parents and kids were like, ‘What are you doing? You’re wasting your life.'”

Fast forward to April 20, 2019, and Wiz Khalifa has THEMXXNLIGHT doing their collective thing on his smoker’s delight mixtape Fly Times, Vol. 1: The Good Fly Young. Kush and Luv’s sublime vocals can be heard floating all over the tracks “G.O.A.T. Flow” and the project’s finale, “All For You.”

Prior to that, Wiz chose to feature them three times on his 2018 album Rolling Papers 2. “Mr. Williams,” “Homework” and “All of a Sudden,” unveiled the undeniable, special dynamic between Wiz, Kush and Luv on record.

The Grammy Award-winning rap star naturally offered the R&B duo advice on sticking to their futuristic sound and how to be patient as the world warms up to what they have to offer.

“He said, ‘You guys are like young, living legends’,” Kush remembered from a conversation they had with Wiz in a hotel lobby one evening. “He said, ‘I can see the potential in you guys and I want to show you guys to the world.’ We’re like that’s crazy coming from Wiz.”

Can’t wait to show you what we have in store for 2019. Jordan year. 😈 #Capricorn

During our #DXHitList interview with Sledgren last October, he told us that as soon as he heard THEMXXNLIGHT, he knew they were special.

“They had a song called ‘Drunk’ and I kept going back to it,” he told DX at the time. “I hit them up. I knew I could create a vibe with them…They hit me back and said they’d love to work but didn’t have much money or something. I’m like, I’m not trying to sell ya’ll anything, I just want to work. Then we just started to build a vibe.”

From there, Sledgren sent them hundreds of beats.

“Throughout that process, we would be sending him back our own songs for our own album,” Luv recalled. “We had three completed songs with hooks and verses and sent it to Wiz because Sledgren said he wanted these three songs. A month later, they told us we were on Rolling Papers 2. ”

Alternately, their appearance on Fly Times Vol. 1 happened in real time. After bumping into Wiz at a Hollywood nightclub and receiving a personal invitation to his home studio, the trio recorded a dozen songs. Among them include, “G.O.A.T. Talk” and “All For You.”

“It was crazy because he was writing the verses in front of us and watching us record our hooks,” Kush said. “It was a really cool experience for us.”

Sledgren is expected to executive produce THEMXXNLIGHT’s next two projects. In addition to cooking up in the studio with Sledge, they’ve been working with some OVO producers as well. Their forthcoming EP, XX is slated for a summer release.

Their latest release is the lyric video for their high-inducing track “Faded” featuring Ye Ali and fans can always marinate on their celestial 10-track EP Luvkush.

The biggest move of all though? Their father recently secured a deal involving India’s billion-dollar Bollywood industry.

“We signed a deal with Sony Music India last week for Bollywood music,” Luv told us. “It’s going to be us singing Hindi-R&B, which is probably going to be the first of its kind.”

“There are people doing it, but we just keep to our style and incorporate Wiz and all these other mainstream American artists to what India likes,” Kush added. “People are saying it’s coming out really, really good.”

Staying in touch with their own culture has been of high importance to the twins. Their group name, THEMXXNLIGHT, hails from their last name Chandani, which literally means “the moonlight” in their language. They also appreciate feedback from those close to them.

“We make it a point to show our Indian friends as well, no matter what kind of music they like, we just show them the songs,” Luv said.

Following the release of XX, they plan on releasing their debut album, tentatively titled Mood as well as a full EP with OVO’s Roy Woods.

“He’s like one of our idols,” Kush said. “He’s in that OVO, R&B category. That whole sound basically shaped and inspired our sound so to work with Roy on a full project is pretty crazy for us.”

Without the loving support of their parents — in spite of looming backlash emanating from their immediate Indian community — none of this would be possible.

Aside from their father securing the powerful Bollywood music deal with Sony Music India, their parents are also involved in every business transaction. Not only that, their parents even helped co-write a song entirely in Hindi.

“On the way to the airport back to college our senior year, our parents actually helped us,” Luv shared. “Within 20 minutes, they helped us to write a full Hindi song because they know the language way better than we do.”

Lately, THEMXXNLIGHT has plenty of reason to celebrate. Between their newly inked Sony Music India deal and becoming close to Taylor Gang, a headlining world tour is also on the table thanks to the Sony deal.

“Through Sony Music India, we will have the power to set up a tour and we can like co-headline with some big act and hopefully bring out Wiz, Roy and anyone else that we feel like fit the vibe of the tour,” Luv revealed.

The Chandani brothers triumphantly took a chance on this music thing and it seems to be working out for them.