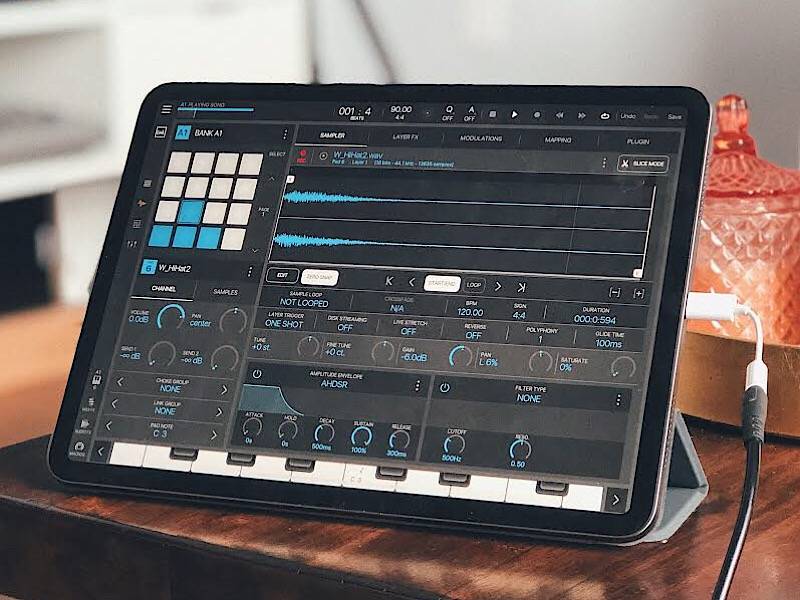 Producing tracks on seemingly basic equipment is nothing new — for many all-stars of eras past, it was the name of the game. A common thread, though, was evolution.

For example, many of the beatmakers who fell head over heels with the art back via the PlayStation gem MTV Music Generator graduated to bigger, more complex set-ups.

In recent years, as portable technology has become capable of handling the daily workflow of many professionals — from designers to video editors — it’s not surprising that music production via iPad has become so wildly popular. Still, despite being a secret weapon of choice for many upstarts (and even some vets), the platform lacks a champion; Fruity Loops, in comparison, counted Soulja Boy and 9th Wonder among its earliest tastemakers.

That all changed on June 29, when California super-producer Madlib rocked Twitter with a bold claim: the entirety of his HipHopDX-perfectly rated collaborative LP Bandana with Freddie Gibbs was produced on an iPad.

I made all of the beats for Bandana on my iPad.

Some of these niggas mad lmao. I’m gonna keep making good music I like. I’m gonna keep doin my thing till i’m 90. i’m gonna keep getting better. That iPad remark was just to say stop making excuses – use a tape deck if necessary. Technology is what you make it.

Although a follow-up tweet seemed to suggest that perhaps that wasn’t wholly accurate, Freddie Gibbs (in a recent interview) doubled down, adding Madlib — who only uses an iPad (and doesn’t own a cellphone) — produced it specifically on an iPad mini.

While some felt slightly disappointed that a producer they likely pictured producing classics on a dusty analog MPC was potentially catching some sun rays on a balcony while knocking out bangers on the same device as a mere mortal, others saw it as validation and an obvious evolution.

I MAKE BEATS ON LOOSELEAF PAPER

“I tell people all the time that it’s not the machine that makes the beat, it’s your mind,” revered Hip Hop producer Buckwild tells HipHopDX when asked about iPad production. “You’re only operating the machine because that’s what your mind tells you to do.”

Buck, who produced classic tracks like “I Got A Story To Tell” by The Notorious B.I.G. and “Whoa” by Black Rob, adds how much production has evolved since he first came in the game. He specifically notes how the primitive SP 1200 had only 10 second sample times.

“Now we’re in the era of having unlimited sample time … we dreamt of days like this,” he says. “[Older heads] want to be stuck in the 90s … if you’re doing anything remotely technologically forward, they feel you’re not keeping it real.

“The point of life is to evolve; if you can make beats on the iPad, why not? You can put it in your pocket and produce anywhere. You record your samples, dump them into your device then go to work — and you do what you do.”

“When you’re on the run one it is one of the best ways to get your ideas out,” Elpee says. “Without having the laptop sometimes, convenience is best.”

While a (potential) Madlib endorsement, as well as that of forward-thinking legends, should be all the ammo new jacks need to delve into the new frontier of production, it should be noted that younger hit-making producers are no stranger to mobile production, even if they don’t advertise it.

L.A. producer/songwriter Ye Ali (with credits that include Eric Bellinger, Chris Brown, Chika, Juicy J and Joyner Lucas) praises the casual nature of producing via iOS. ”Making beats on the iPad is so impersonal that you end up making your best music because there’s no pressure … no big studios, ” he explains. ”It’s like the same thing as people texting intimate, deep thoughts via text, but can’t convey it while talking on the phone. Casual technology is more comfortable to create with.

”I made the melody for a beat on my phone via garage band and sold it for $10k a month later,” Ali admits.

“I’ve used an iPad for production before — it’s different and more convenient as far as on the go production,” says DaBaby collaborator (“Walker Texas Ranger”) Producer 20. “I rock with the idea of producers using an iPad for beats, anything you can use to make music and make it dope is a good idea no matter what it is.”

Producer J57 also points out many notable producers are implementing iPad production techniques — and nobody even knows.

”One of my go-to co-producers, PJ Katz, can play many instruments, is proficient in Pro Tools and Ableton, can get busy with an MPC, and he also brings in some next levels sounds via his iPad as well,” he says.

“I rock with him because he’s a musical genius and knows how to make it sound incredible — you would never know he utilized an iPad on any of the stuff we do.”

Ultimately, there’s no stopping progression, and as evidenced by the number of people who referenced Intua’s Beatmaker 3 in the replies of Madlib’s tweet, the low barrier of entry is extremely attractive.

“You know, if he did use the iPad, kudos to him,” Buckwild exclaims. ”I’d be happy for him to take it one step further … it will inspire some young people who look up to them to go and do what he does.”