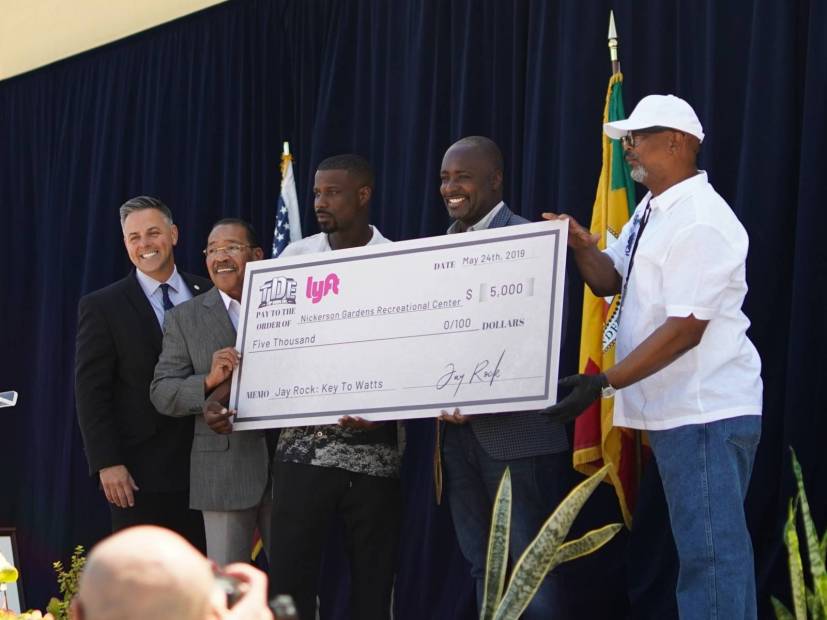 Watts, CA – Jay Rock was awarded the key to his home neighborhood of Watts by the City of Los Angeles and 15th District Councilmember Joe Buscaino on Friday (May 24).

The ceremony took place in Nickerson Gardens at the Recreation Center Basketball Courts near his childhood home as labelmates and fellow Los Angeles natives ScHoolboy Q and Ab-Soul looked on.

“WHen u stay down tHis type of sHit Happens.. love u fool,” Q wrote in a congratulatory Instagram post on Thursday (May 23).

WHen u stay down tHis type of sHit Happens.. love u fool @jayrock congrats n word

To make the event more memorable, Rock partnered with Lyft and TDE to donate $5,000 to the local Nickerson Garden Community Center.

“This right here, man, is a blessing,” he told TMZ. “I’ve been able to win a Grammy and then to come back and get the key to the city of Watts.”

“It’s that stigma … people like to come support when somebody’s gone, people wanna show all the love, but they didn’t wanna show the love when he was here,” he said. “[Nipsey is] my brother. We went to the same middle school together.”

Earlier this year, Rock tied for Best Rap Performance at The Grammy’s for his Kendrick Lamar-collaborated single, “King’s Dead,” off the Black Panther soundtrack.