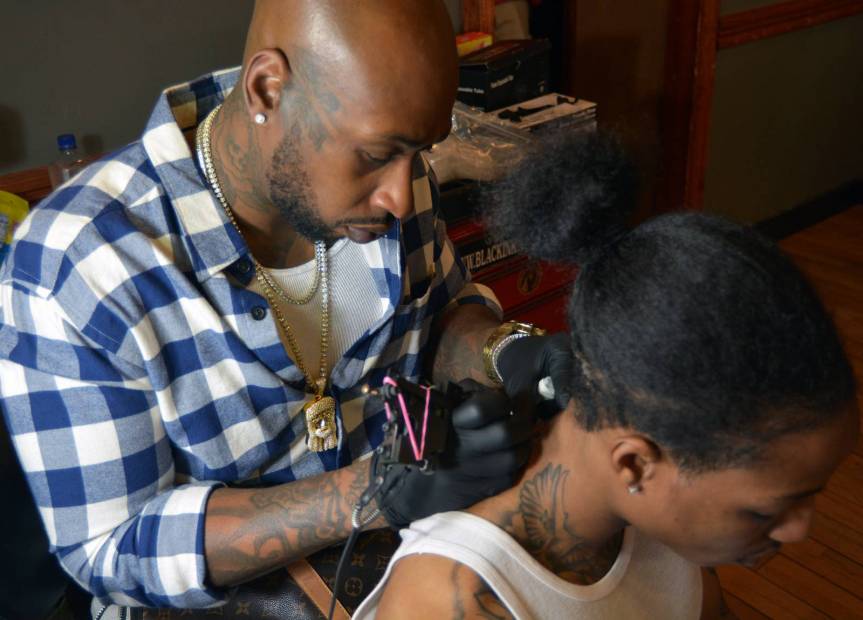 New York, NY – The line to get to the Black Ink shop on 125th Street in Harlem, New York, stretches around the block.

This isn’t something that’s unusual, on its own — the popularity of the hit VH1 show, Black Ink Crew, and all its ancillary spin-offs have put the chain of tattoo shops in a constant state of industry. The manager of the Harlem store, Feezi, is in a tizzy, scuffling and scrounging to get paperwork lined up, herding the impatient customers to their seats, fluttering around the place and barking orders at the tattoo artists on staff on this rather temperate Saturday afternoon.

Ordinarily, this would be a day just like any other in this notorious tattoo shop.
But this isn’t just another ordinary day.

Jems, one of the tattoo artists on-staff, is fully focused on his task at hand: drawing a facial portrait of the late Nipsey Hussle with laser-like precision. Each line on his face is stippled, each hair on his beard is in place — a vision frozen in time, gunned down in his prime by someone he once called a friend.

By “it,” of course, Jems is referring to this particular Nipsey Hussle tattoo — and many others inspired by Hussle’s career that Black Ink is offering for free, as a way for the community to come together and remember the late 33-year-old rapper and entrepreneur.

The mood is still decidedly somber — both amongst the patrons and the employees — as Ceaser, the majordomo of the Black Ink enterprise, saunters in. He’s the consummate professional who embodies the “boss” mindset — clothes well-pressed, a firm handshake and an introduction to this writer before he sits on his stool, hyper-sterile workspace — and he conveys a silent strength that seems to be much-needed in the wake of this rather tumultuous murder.

He’s soft-spoken, almost demurring, but sure of himself as he explains his reasoning for offering free tattoos honoring Nipsey Hussle. “What he was preaching — what he was saying — he was talking to all of us,” he said. “And he inspired so many with his message of positivity. And the thought that he could get gunned down, in his own hood, by his own people, in his own store…”

His voice trails off and he looks around, sighing as he does so — the implication, of course, being “it could have been me.” And, in reality, he’s right: in this hyper-aware Instagrammable age, where the need to over-share everything about our lives and geo-tag our locations has become part and parcel of a larger “branding” opportunity, celebrities — no matter their stripe — are painting a target on their backs with each photo. Be it at the hands of a crazed fan, a jealous former compatriot, or even a jilted employee (hello, Selena Quintanilla-Perez), public figures are suddenly exposed as being vulnerable thanks to Hussle’s unfortunate demise.

But Ceaser has no interest, today, in talking about either the death of Nipsey Hussle — whose song, “Racks in the Middle,” is currently providing the ambiance in the shop — nor the manufactured drama of his hit VH1 show (“You don’t see any of them here, do you?” he asks, pointing around the shop. “There’s a reason for that — you see these guys? These are the guys who are on the grind and putting in that work. Them.”).

Rather, he’d like to talk about how Nipsey Hussle — and the tattoos celebrating his life — are bringing people together. “Tattoos are a very personal thing for people,” he said. “It’s something that lasts forever. It’s something that lets the world know who you are before you open your mouth to speak. And these Nipsey tattoos speak to all of us, for us. They unite us all under this umbrella.”

Barbara, a Brooklyn native who is studying to be a midwife, agrees with Ceaser. The young woman, who chose to get “prolific” tattooed on her lower arm, says that the tattoo sends a positive message to her as a budding entrepreneur. “For me, I want my daughter to know that she comes from a hard-working woman,” she said. “And ‘prolific,’ that to me means something big. Something beautiful. Something blessed. And that’s what Nipsey wanted us all to believe about ourselves.”

It’s just as personal for Ceasar, too. “Nipsey’s murder brought about more questions than answers,” he said. “But that’s good, in a way. Not good that he’s gone, but good because we needed to have this conversation, as people. We need to teach our people about ownership — entrepreneurship — all money in, no money out. I’ve already got business ventures set up for my daughter, for when she grows up. I don’t want this man to have died in vain. I want him to know we appreciate him — and we always will.”

Ceaser then turns back to his task at hand — tattooing “prolific” on the back of an expectant customer’s neck. “Racks in the Middle” continues to blast as the tattoo needle hums, indicating business as usual at Black Ink, with a common shared goal that has galvanized the community forever.