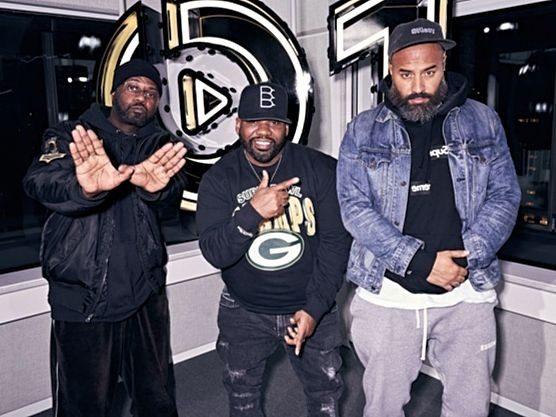 New York, NY – For many dedicated Wu-Tang Clan fans, November 9 is almost like a national holiday. It was on this day in 1993 when the celebrated Hip Hop collective unleashed their seminal album, Enter The Wu-Tang (36 Chambers), and rap changed forever.

As the group celebrates the classic album’s 25th anniversary, Raekwon and Masta Killa stopped by the Beats 1 Radio studios in New York City to chat with Ebro Darden. During the conversation, the storied MCs talked about how the crew’s Logic collaboration — “Wu-Tang Forever” — happened  and revealed Drake actually tried to get all of Wu-Tang on a track first.

“It was in the air that this youngster wanted us to be involved with the record,” Rae explains. “We was familiar with him and we liked him. We liked what he was about and instantly it was like, ‘Yo, let’s do it,’ and he was able to have the patience to get it because I know he was working on it for a second.

“He was able to reach out and one thing led to another and the next thing you know … he even got one of the top MCs in the neighborhood that we looked up to on the track too. It was like, ‘Wow, you even went and got Scotty. Why he on there?’ How’d that happen? But it happened.”

Masta Killa adds, “[It was] the timing. The timing as well, you know what I’m saying, to get it done because I remember Drake also reached out for us to get the same. He wanted everybody. He even dedicated a song for Wu-Tang or whatever. But Logic was blessed to, I guess, the right timing and then he got it done.”

“Wu-Tang Forever,” which appeared on Logic’s Young Sinatra IV, gave Wu-Tang their first Billboard-charting single in 16 years. Although it didn’t crack the Hot 100, the track landed at No. 17 on R&B/Hip-Hop Digital Song Sales and No. 44 on the all-genre Digital Song Sales.

Elsewhere in the conversation, The Chef and Masta Killa open up about working with RZA, ending the year at The Sydney Opera House, memories of Ol’ Dirty Bastard and Wu-Tang’s new lipstick line.