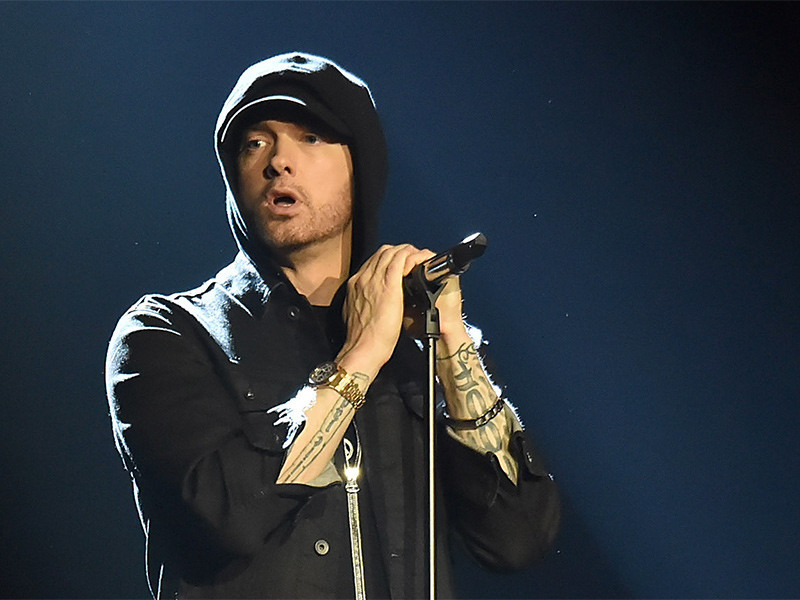 Eminem was a recent guest on LL Cool J’s Sirius XM radio show Rock The Bells Radio, where the two Hip Hop powerhouses discussed a bevy of topics, including their Hip Hop origins.

During the interview, Em recalled getting the Slim Shady EP off the ground, a fateful trip to Las Vegas and meeting Dr. Dre for the first time.

“The Slim Shady EP that we pressed up staring moving some decent amount of units,” he says. “We had a guy in Vegas who wanted to buy 5,000 of ’em. We were like, ‘Oh shit!’ So, we go to Vegas. We started running around, putting the shit on consignment at different stores and stuff. I come back to the hotel just from doing that and Marky Bass was like, ‘Man, we gotta a call from some doctor. He wants to meet with you.’ I’m like, ‘Don’t fuck with me. Don’t fuck with me. Do not fuck with me.’

“‘Cause I remember I was in the car with these two chicks right before I went out to Vegas to sell the tapes and they were playing ‘Phone Tap.’ I was like, ‘Yo, if I could just get with Dre. Oh my god.’ Literally a week later, we got a meeting with Dre when we go out there. Then he walks in and I’m like, ‘You’ve got to be fucking kidding me.’ That was it.”

As Slim goes on, he remembers running into LL at a Foot Locker after signing with Dre.

“Next thing you know, I’m in Foot Locker with Curtis Tucker and she’s getting outfits for the ‘Just Don’t Give A Fuck’ video and I see you [LL Cool J].

Elsewhere in the interview, Em opens up about the power of Hip Hop and how he fell in love with the culture. He rattles off LL, Run-DMC, Beastie Boys, Ice-T and the Fat Boys as being major influences on him coming up.

“I absolutely wanted to be like you. I wanted to be like Run-DMC. Something about it. It was the energy — you could just say what you wanna say. You could talk about your life and talk about shit that bothers you. I just gravitated toward it and never strayed from the first day I heard a rap song.”

Finally, Em discusses writing the iconic single “Stan” from 2000’s The Marshall Mathers LP. Over the past 18 years, the song has become a permanent fixture in pop culture. In fact, it’s even listed in the Oxford Dictionary.

“When I first got in the game, I didn’t understand a lot of shit,” he explains. “If you were walking outside the venue after a show, you saw some fans and took some pictures and shit, there’s always going to be somebody that you don’t get a chance to get to. That was one of the things that I started seeing.

“It was my first experience with it … I think it was combination of what I was going through at that time and experiencing fame for the first time and all that stuff.”

He adds, “I basically put myself in the fan’s shoes.”

The Eminem interview is part of the upcoming inaugural episode of LL’s new monthly show, The Influence Of Hip Hop, which will be co-hosted by DJ Z-Trip.

The show premieres on Saturday (September 1) at 3 p.m. ET on Rock the Bells Radio via satellite on channel 43 through the SiriusXM app on smartphones and other connected devices, as well as online here. [apple_news_ad type=”any”]