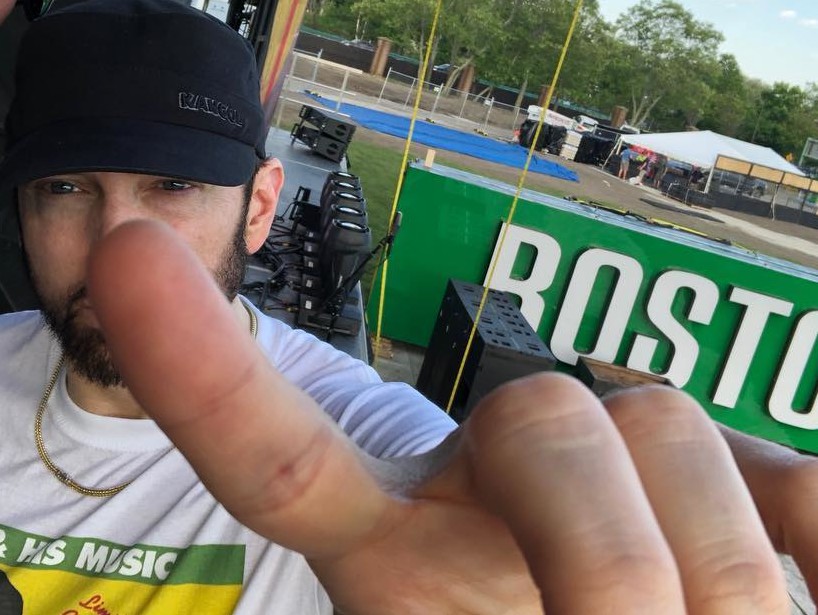 Boston, MA – Eminem has been increasingly active on social media since announcing he was taking control of his accounts in early April.

Em continued this trend on Monday (May 28) when he hit Instagram to recall the time Val Kilmer saw him naked in 2009 or 2010.

“This is like a confessional,” he said. “I have something on my mind that’s been bothering me for years, and I will tell you a little story.”

Unable to recall the exact specifics, Em says the incident went down at either the VMAs or the MTV Movie Awards.

“My trailer was next door to 50 [Cent]’s trailer,” he continued. “I went to the back to go change for stage and as I’m taking off my underwear, I look across in 50’s trailer, right even with me, is Val Kilmer sitting like this in a chair. And I know he’s looking at me, and I know he looked away because he saw me looking at him. I know Val Kilmer saw me naked. I just had to get that off my chest.”

Eminem is currently busy headlining festivals across North America, including Boston Calling this past weekend, as well as Governors Ball and Bonnaroo next month.

Em will then head across the pond for his nine-date “Revival Tour” in Europe, beginning in Norway on June 30 and wrapping up with two dates in London on July 14 and July 15.