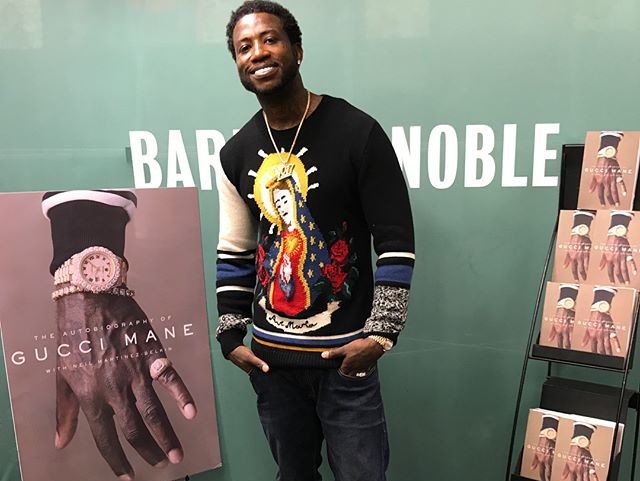 Guwop was signing copies and taking photos with his fans to celebrate the release of his new autobiography – The Autobiography of Gucci Mane – which hit stores that day.

In footage released by TMZ, an activist (posing as a fan) bumps fist with Gucci before saying, “The word on the street is that you’re thinking of going vegan, brother. But you can’t be vegan if you keep wearing that fur!”

The angry protester then pulls out a t-shirt emblazoned with “ANIMAL ABUSER” before being joined by a fellow protester. The pair wave the t-shirts around and proceed to repeatedly chant: “Shame on Gucci, animal abuser!”

The two protesters, who were reportedly with the New York Animal Defenders, were quickly escorted away by security.

Despite the brief interruption, Gucci apparently was able to keep a smile on his face. He captioned his Instagram post, “Off probation today and my book is in stores NOW! What a day!!!!”

Off probation today and my book is in stores NOW! What a day!!!!

A number of stars, including Beyoncé and Kanye West, have been criticized for wearing animal fur. Yeezy was lambasted by animal rights organization PETA (People for the Ethical Treatment of Animals) after he rapped, “Someone tell PETA my mink is draggin’ on the floor” in the hook of his 2012 song, “Theraflu.”