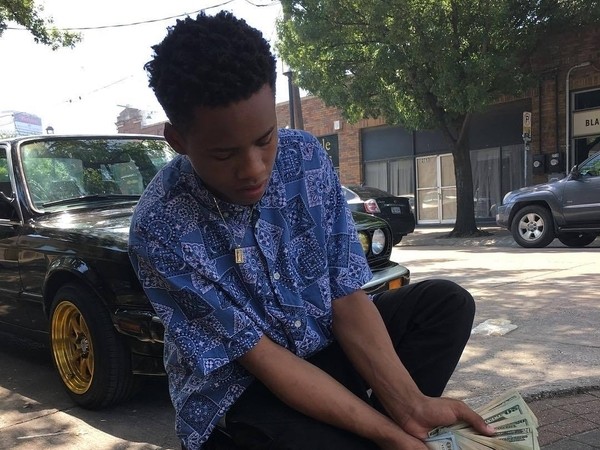 The rise of Tay-K is both fascinating and troubling.

The 17-year-old rapper has blown up over the summer thanks to his single “The Race,” which debuted at #70 on the latest Billboard Hot 100 chart. The song is definitely catchy, but the sordid backstory of its creator has raised questions about exactly why people are so compelled by the record.

The teen sensation was born in Long Beach, California before moving to Arlington, Texas with his family. In an interview with Say Cheese TV, he said his mother’s gang experience influenced him, affecting both his music and actions in the streets. But that life led him down a violent path.

Tay-K’s first run-in with the law came when he was connected to the murder of 20-year-old Sara Mutschlechner in 2015. Authorities determined he was in the backseat of an SUV during a New Year’s Eve shooting in Denton, Texas. Eric Johnson, a former Marine who rapped under the name Santaga Sage, was ultimately convicted as the shooter and sentenced to 44 years in prison.

Things got worse in the summer of 2016. Tay-K was allegedly involved in the murder of 21-year-old Ethan Walker, who was killed during a home invasion in Mansfield, Texas. Tay-K was arrested in connection to the murder, which soon led to him becoming a fugitive.

On March 27, 2017, Tay-K tweeted, “Fuck dis house arrest shit fuck 12 they gn hav 2 catch me on hood.” He cut off his ankle monitor and went on the lam, allegedly engaging in more violent behavior while on the run.

During his time as a fugitive, Tay-K became the suspect of a murder that occurred in San Antonio, Texas. He was also accused of robbing and brutally beating a 65-year-old man in Arlington, Texas.

The law caught up to the controversial artist on June 30 in Elizabeth, New Jersey. “The Race” was quickly released on the Buffet Boys YouTube channel after his arrest and began its meteoric rise. The song unabashedly embraced his felonious background with the opening lines: “Fuck a beat, I was tryna beat a case/But I ain’t beat that case/Bitch, I did the race.”

The record became a viral hit, getting extra boosts in recognition from the likes of Travis Scott, Playboi Carti and Kodak Black, who has even said he’d like to sign Tay-K. As of Tuesday (August 15), “The Race” has well over 19 million views on YouTube.

DO THE DASH THEN GO OUT THE WAY

Plenty of rappers, including Lil Yachty, have released their own versions of “The Race” and the original has officially hit the Billboard charts, all of which will only increase the song’s notoriety. At this point, its success is undeniable.

Still, there’s no separating the  kid from the art. Would people be so intrigued by this record if it wasn’t for the unsavory things he’s accused of doing?

Tay-K is currently in custody facing a murder charge at the Lon Evans Correction Center in Tarrant County, Texas. Authorities hope to try him as an adult.