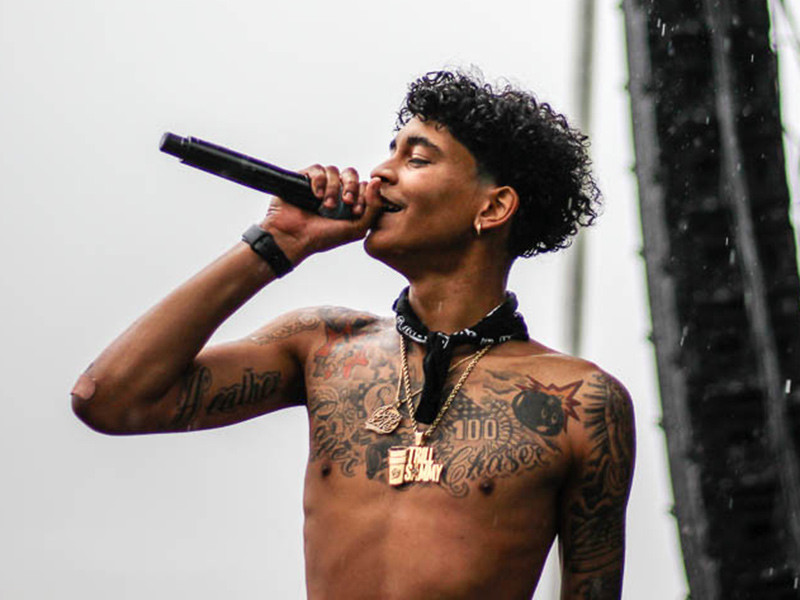 Los Angeles, CA – Last week, Trill Sammy released his remix of Tay-K 47’s “The Race” and since then it’s gotten more than half a million plays on YouTube and another 200,000 on SoundCloud.

But who’s Trill Sammy, you ask? Don’t worry — we’ve got you covered.

The Greater Los Angeles Area is home to approximately 18 million souls. With the Hollywood sign overlooking the city, people from all over the world come here in pursuit of their dreams. In the words of Kendrick Lamar: “They come for the women, weed, and weather.”

Insert 19-year-old Trill Sammy, who hails from Houston, Texas. The young trap rapper already has close to 1 million followers on Instagram, all while remaining independent. Sammy is most known for his 2016 remix to Madeintyo’s “Uber Everywhere,” and his close affiliations with Famous Dex and Dice Soho.

Recently, HipHopDX caught up with Sammy at his new crib in Hollywood. With his furniture in the making and his belongings still back home, Sammy marked the move to L.A. with a large stomach tattoo by Pachuco Tattoo shop owner Herchell, who also recently inked Lil Twist’s face with a “loyalty” tattoo.

Fresh off the 3.5 hour tattoo session, Sammy reported being a bit drowsy. Sparking up a Barewoods blunt courtesy of Sour Matt, the Houston MC spoke on why he decided make the move at this point of his life.

He explains, “Everybody working out here. There’s a lot of studios out here. I love the weed out here. It’s just a better environment for me to build. There’ll be a chance for me to just focus on myself more.”

When asked how the parties and drugs compared to H-town’s, it seemed like a no-brainer.

Of course, being a rapper from the Magnolia City means you’re bound to cross paths with some of the city’s notables. Just last year, Trill Sammy opened for RiFF RAFF on his Peach Panther Tour.

“RiFF RAFF always been cool. I came up listening to RiFF RAFF, Soulja, Chief Keef (at the moment). I fuck with RiFF RAFF hard. He fucks with me, too. He always looking out for me. Anything I need, I can hit him. I call him Uncle RiFF. Shit.”

With exciting news yet to be revealed, Trill Sammy credits his big break to his management.

“My big break? Shit. I got a super, super magnificent management … It’s all about your team, though. As long as your team functioning right, I feel like you’ll be good.”

When asked how he compares to the current wave of turn-up rap music, he admitted he didn’t have many touchpoints to compare with.

“The rap wave? Shit. I’m just a trill nigga out of Houston, Texas. Just doing my own thing. However I feel. Just having fun with it. I don’t really listen to a lot of other niggas. I describe my sound more Southern, turn up, like you said.”

Sammy also lists Young Thug and Post Malone as artists he hopes to collab with in the near future. “As far as the young wave, I fuck with Dex hard. Ugly God. Whoever fuck with me I fuck with them.”

It’s safe to say this move to L.A. was also fueled by the works of his upcoming project, which will feature the likes of “Magnolia” rapper Playboi Carti.

Get ready to hear more from Trill Sammy in the coming months.