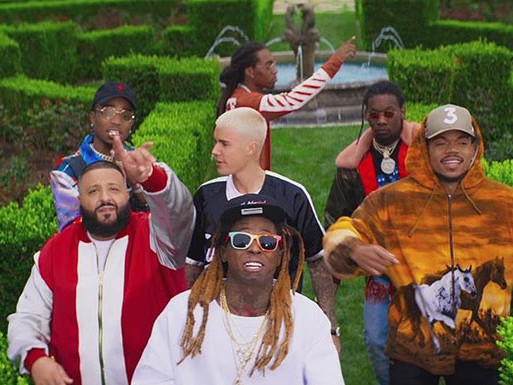 Just when it looked like Bruno Mars’ hit single “That’s What I Like” would never let go of the #1 slot on the Hip Hop & R&B Singles Chart, DJ Khaled arrives with his all-star “I’m The One” behemoth that features Lil Wayne, Justin Bieber, Quavo and Chance The Rapper, to take its place. Other than that, not much has changed in the Top 10 of the charts for the week ending May 4, 2017, as the usual suspects have maintained their positions.

TDE’s SZA makes an appearance on the chart with “Love Galore” featuring Travis Scott, making its debut at #41 and Logic’s “1-800-273-8255” enters the charts at #17 after his album Everybody was released earlier this month, predicted to move over 250,000 units in its first week.

Additionally, Nicki Minaj’s “No Frauds,” which was supposed to be her big hit following her beef with Remy Ma, slips down the charts by 25%, from #34 to #41.

Bruno Mars and Kendrick Lamar had been hogging the #1 and #2 spots for some time now. That is, until the release of DJ Khaled’s “I’m The One” starring Lil Wayne, Justin Bieber, Quavo and Chance The Rapper, which skyrocketed itself into the #1 position on the Single Sales chart, as well as the Hot 100.

Upon the single’s release, it sold 170,832 units and was coupled with a summer-time fun visual.

“HUMBLE.” might’ve slipped down to #3 this week because of DJ Khaled’s “I’m The One,” but Kendrick Lamar is the only one in the Top 10 with two singles charting. Despite the slip, the Mike WiLL Made-It-produced record gained 2% in sales and sold over 55,000 units.

Post Malone and Quavo’s collaborative track “Congratulations” is the only single in the Top 10 to move up in chart positions from #6 to #5. Sales-wise, the single sold 13% less with more than 28,000 units moved.

This is the second single Quavo is featured on that is positioned in the Top 10.