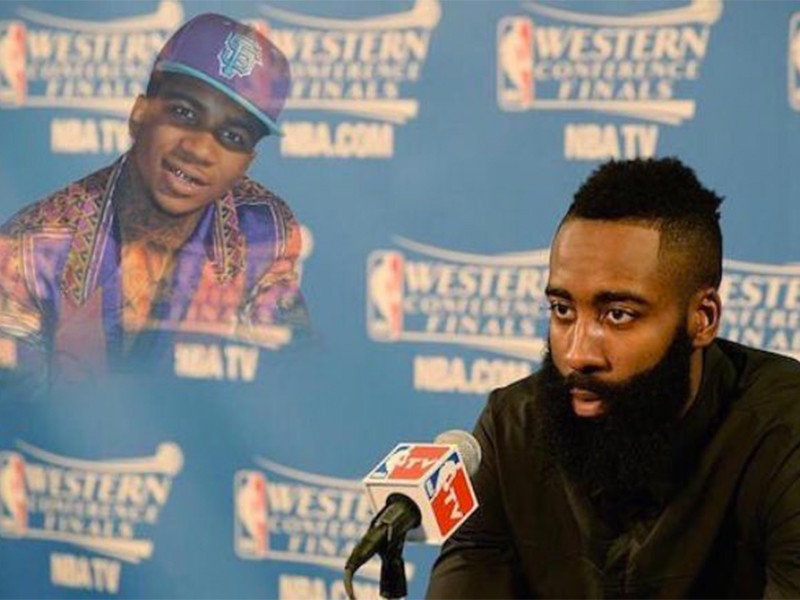 To call the Houston Rockets’ 39-point, season-ending loss heartbreaking for fans would be an understatement. For his part, James Harden took the blame for the terrible performance in Game 6 of the NBA conference semifinals. “Everything falls on my shoulders. I take responsibility for it, both ends of the floor … it happened, and we move forward,” Harden said to a post-game press conference.

Perhaps, though, next season will be different — or so a tweet from Lil B suggests.

In case you don’t remember Lil B — decked out in a blouse, chandelier earrings, and a periwinkle sun hat — dropped by ESPN’s SportsNation back in 2015 to publicly state what many of his followers already knew: James Harden had fallen victim to a curse.

Stemming from Harden’s refusal to acknowledge that the celebratory “cooking dance” he was doing during games originated from the rapper, the curse seemed to have some merit. The Rockets lost their next game and botched the Western Conference semi-finals against the Warriors. To make matters worse, Harden set a new record for turnovers during the playoffs. Lil B eventually lifted his initial curse, stating James “was a troubled soul deserving of our pity.”

Harden, though, refused to stop doing Lil B’s trademark dance, leading to a reinstatement of his curse … which brings us to last night’s slaughter. It seems Lil B is once again feeling merciful and is willing to lift the curse yet again. “I apologize to James Harden I’m ready to talk and end the curse,” he posted. “It’s time to talk and be the leader everyone believes you are.”

Many fans seemed grateful for his humanity:

@LILBTHEBASEDGOD Thank you for forgiving him and working to figure this out. We do not want to see him suffer anymore.

@LILBTHEBASEDGOD A legend. A inspiration. A motivator. We do not deserve you.

@LILBTHEBASEDGOD Time to get my Rockets future in for next year

@LILBTHEBASEDGOD Lil B is so damn gracious and humble, Earth must learn from him

A Lil B curse can be quickly dissolved. Kevin Durant’s curse, for example, was able to be lifted at the price of a one-on-one game with the rapper (or, eventually, a trade to the Lil B’s hometown team, the Golden State Warriors).

Not to get too superstitious, but it seems like there would be no harm in having the curse lifted next season.