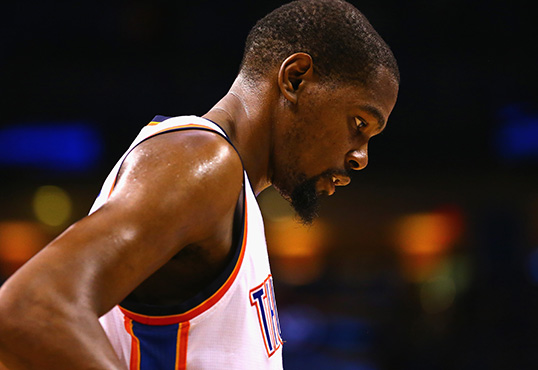 Last week, the Oklahoma City Thunder were poised to make their first trip to the NBA Finals since 2012. They were up 3-1 in the conference finals against the Golden State Warriors and had racked up some big wins in Games 3 and 4. It looked like they were going to close it out at home last night (May 29), going into the fourth quarter with an eight-point lead.

They lost the game by seven points.

Some analysts credit Golden State’s clutch shooting and a monster performance from Klay Thompson for last night’s win, but Lil B fans have a different idea about what’s really going on.

Kevin Durant, the 27-year-old Oklahoma City forward who shot 10-for-31 and scored 29 points last night, was afflicted by the Oakland-area rapper’s curse after speaking ill of him in 2011.

I tried to listen to Lil B and my mind wouldn't let me do it….can't believe this guy is relevant

In 2012, after the Thunder fell to the Miami Heat in the finals, Lil B gave Durant a pass.

I WANNA SAY THAT "THE BASEDGODS" CURSE IS GONE FROM KEVIN DURANT THE THUNDER ARE FREE NOW TO WIN FUTURE GAMES, U CANT WIN HATING – Lil B

But then reinstated the curse in 2014.

AND FUCK KEVIN DURANT LIL B FOR LIFE – Lil B

He also doubled down with a full diss track, where he outlined that the only way to lift the curse is by taking on The Based God in a game of 21.

When the Thunder went up 2-1 in the series, the avid Golden State fan seemed impressed by Durant’s determination.

But now that things are tied at 3-3, the memes have come back in full effect.

KEVIN DURANT PLEASE AGREE TO PLAY @LILBTHEBASEDGOD IN A GAME, SO HE CAN LIFT THE CURSE. AT THIS POINT YOU'RE ONLY HURTING YOUR CITY.

The curse is real. The series is already over. #BasedGodCurse pic.twitter.com/C9Kl0Zz8E4

LIL B TRENDING WORLDWIDE – Lil B

Game 7 of the series goes down on Monday at 6:00 p.m. PST in Oakland, which gives Durant a couple of days to still challenge Lil B.

If Golden State wins, they’ll be the tenth team in NBA history to win a series after trailing 3-1.