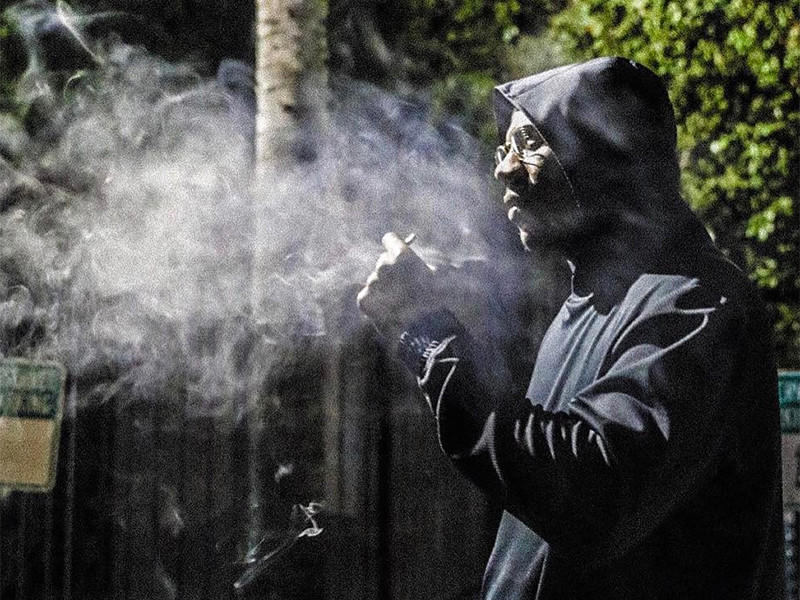 Los Angeles, CA – Carrying the A$AP moniker automatically grants you the respect and honor of being part of the A$AP Mob. These aren’t just a group of young rappers from Harlem, they are a family. Whether it’s music, fashion, or art, everything is done to push the movement forward.

Their music video for “Yamborghini High” is a tribute to the founder of the group, A$AP Yams, who died in January 2015. Within the crazy visuals you will find A$AP TyY. HipHopDX caught up with the Bike Life daredevil back in March as he was filming a new music video. TyY spoke on how Yams impacted his career.

“[He] played a major part,” he shares. “Shout out to Yams. RIP Yams. Shout out to the boy Yams. The Yams Foundation. Yams campaign. My brother. My long lost brother. It’s a very touchy situation, you know what I mean? I wish he was here with us … but he is here with us. He played a major role, just keeping us together. Just had a vision, man. He took us to an extravagant place, and we just always striving and striving still until this day on. We just living in his name right now. He played a major role in everybody’s career man. He did so many things, man. I can’t even count.”

TyY reflected on when he dropped a music video for “Chamber Lock,” which features footage of Yams.

Pulling up to the Evergreen Cemetery in East L.A., TyY said he was in the City of Angels for “palm trees and bad bitches,” but also evidently made time to film his new music video for “Mosh Pit.” The song is still unreleased, but the snippets we overheard definitely carried the hard-hitting sounds of A$AP Ferg and the rest of the gang.

Being on site at a cemetery for his upcoming “Mosh Pit” visuals was no accident.

TyY explains: “There’s a lot of fuckery in this rap game, and I’m here to put these rappers in the fucking grave.”

But the rappers he’s allowing to survive include those in the Mob, of course. On Halloween of last year, A$AP Mob dropped Cozy Tapes Vol. 1, which caught everybody’s ears. TyY did a good job of keeping us on the edge for wanting more in Volume 2.

When asked how he fits into the Mob (a roster of 37 members, and counting), TyY responds, “Cause I’m wild, erratic, and I really don’t give a fuck.”

And he has no intentions of forcibly making a name for himself. “I just plan on being me, I don’t plan on standing out. I just plan on doing what I do. Being the guy that I am.”

The 25-year-old dropped his biggest single, titled “Trump,” right before election day at the end of 2016.

“I didn’t really have a vision,” he explains. “I just had an aesthetic of me just voicing my opinion on how I feel about the output of presidency. And that was that.”

It seems the mainstream success of YG and Nipsey Hussle’s “Fuck Donald Trump” has inspired other artists to voice their frustrations through music.

“Yeah, I was inspired a lot,” he says of the other songs before explaining his lyrics. “I definitely said, ‘I woke up and had a dream that I robbed Donald Trump. Tied his ass, threw his ass in the trunk.’ I guess that’s how I was feeling in the moment of me making that record. It was just be voicing my opinion. And that’s it.”

After being interrupted by “bitches” calling his line, TyY shares his passion for Bike Life, a movement of people who ride their ATVs and motorbikes around the city.

“I’m not the leader of anything,” he says. “I’m just a guy that stands for a bunch of guys that actually love to ride bikes, and share the same passion as I do. And I just want to shed light on them. I’m not necessarily the leader. I’m just the guy that represents the culture of bike life.”

The group is known for their reckless behavior. TyY never wears a helmet.

Even though he hopes the NYPD doesn’t know him and his antics, he’s not exactly looking for other rappers to reach out to him either.

“I’m being selfish with music right now,” he shares. “I’m just working on my own thing. Get in touch with me if you want to fuck with me, that’s how I feel.”

And that’s a wrap.