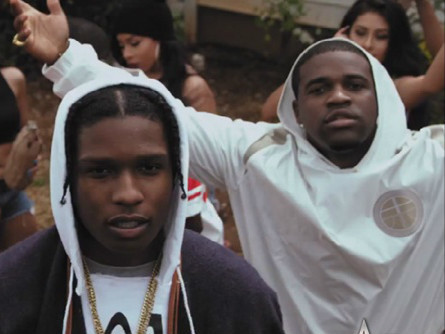 A$AP Mob’s Cozy Tapes Vol. 1 is upon us this Halloween. The tribute to A$AP Yams is made up of 12 songs including the singles “Yamborghini High” and “Crazy Brazy.” A$AP Ferg, A$AP Ant and A$AP Twelvyy unite forces for “Young Nigga Living.” The project closes with A$AP Rocky enlisting Tyler The Creator, Playboi Carti and Yung Gleesh for “Telephone Calls.”

The New York group released the 12-minute visual “Money Man/Put That on My Set” to further the late member’s legacy with Lord Flacko and A$AP Nast.

A$AP Yams died in January of last year of a drug overdose and Rocky took it upon himself to finish his friend’s project, which led to Cozy Tapes Vol. 1 before you now.

Stream A$AP Mob’s Cozy Tapes Vol. 1 below and keep scrolling for the tracklist and cover art.

(This article was first published October 26, 2016 and is as follows.)
A$AP Mob is paying homage to the late A$AP Yams with the cover art for Cozy Tapes Vol. 1. A$AP Ferg posted the official image along with the project’s tracklist on Instagram today (October 26). The Mob’s Twitter page shared the project is set for a Halloween release date, which is Monday (October 31).Cozy Tapes Vol. 1 is made up of 12 tracks and opens with the banger “Yamborghini High” and includes “Money Man” and “Put That On My Set,” which were combined together for an epic 12-minute video.

A$AP Rocky announced earlier this month that the brainchild of Yams was finished. He had personally taken it upon himself to finish the project after the Mob member passed away from a drug overdose in January of last year.