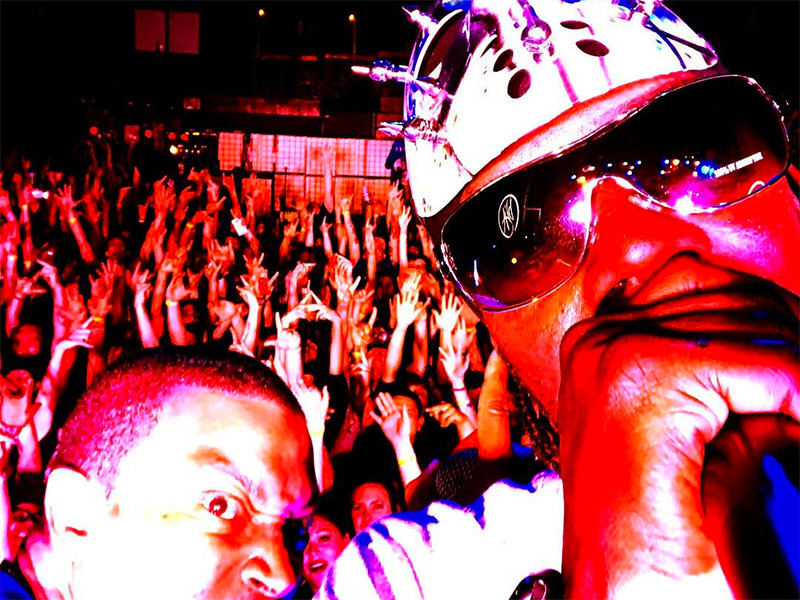 Fort Collins, CO – Sitting in the back alley of The Aggie Theatre in Fort Collins, Colorado, the lavish Strange Music tour buses had taken over. Tech N9ne, Krizz Kaliko, Stevie Stone, Ces Cru, and Brotha Lynch Hung were in town on the Strictly Strange Tour to promote all of their individual projects. Not surprisingly, Brotha Lynch, who signed with the Kansas City, Missouri-based label in 2009 after decades in the industry, was decked out in a Halloween mask and brandishing his signature style of “horrorcore” rap. But he doesn’t exactly describe it that way, despite the fact he’s been embraced by the horrorcore community and is often referred to as one of the forefathers of the genre.

“The crazy thing is I consider my rap rip-gut, cannibalism rap,” Brotha Lynch explains to HipHopDX. “But the horrorcore scene is so big that I’ll accept that. I don’t think there’s going to be any other rappers that are going to rap about cannibalism, so I gotta jump into some genre.”

Before signing with Strange Music, the Sacramento native was approached by the Insane Clown Posse-owned label, Psychopathic Records, but because he was at a crossroads in his career, he turned down the offer and even declined an initial contract from Strange Music.

Fortunately, thanks to an elaborate performance by Tech N9ne, he was finally convinced Strange Music was the ideal home for him. He felt he could join other like-minded artists on his quest to provide the musical landscape with his admittedly “sick and twisted” brand of rap.

“I was invited out to one of Tech’s release date parties,” he recalls. “He came out on a white horse and did all this extravagant stuff, and I thought, ‘Wait a minute, this might be the spot for me.’ One, they would let me exercise what I do in my music. There are limitations to everything, of course. No label is going to let you do exactly what you wanna do, you know — I’m sick and twisted. I knew for the most part, that they’d let me do what I want to do and they’d let me put the vision behind my music.”

Obsessed with horror films since discovering The Twilight Zone when he was 13, Brotha Lynch has carved out a comfortable niche for himself and continues to push the boundaries with his art. After he wraps up the current tour, he plans on relocating to Los Angeles to work on some projects with Snoop Dogg, who he’s collaborated with in the past on tracks like “Anotha Killin” from 2010’s Dinner and a Movie, and 2013’s “Dogg Market.” At nearly 50 years old, he’s still going strong and doesn’t intend on stopping.

“I’ve always considered myself an artist once I really got in the game,” he says. “Artists never quit. I never once thought about retiring. I don’t care if you’re 90 years old, you’re an artist.”

Check out “Anotha Killin” with Snoop and “Meat Cleaver” above.