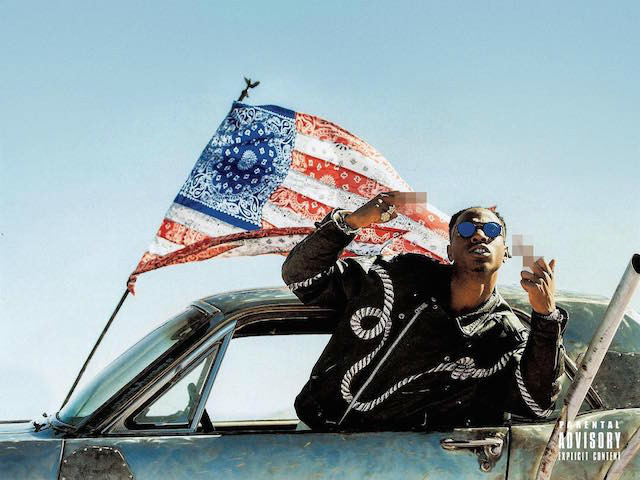 Joey Bada$$’ much-anticipated All-Amerikkkan Bada$$ album is upon us.

The Brooklyn lyricist makes a political statement throughout the 12-track project. He has an all-star roster of guest features from ScHoolboy Q, J. Cole, Styles P and fellow Pro Era members Kirk Knight and Nyck Caution.

Bada$$ previously released “Land of the Free” and “Devastated” as the singles for his sophomore LP, the latter giving the independent star his first gold plaque.

Stream Joey Bada$$’s All-Amerikkkan Bada$$ album below and keep scrolling to see the cover art (both of them) and tracklist.

Joey Bada$$ says he was trolling all of us with the last cover art for All-Amerikkkan Bada$$. Well, kind of.

The American flag bandana that was the initial cover art for the project, due out April 7, is actually the outer sleeve that the album will come in. The official cover art, designed by Tony Whlgn and shot by Gari Askew, shows the Brooklyn MC hanging out the window of a car flipping off whoever’s watching. The American flag bandana is still there hanging off the top of the car.

Joey had previously shared that he has quite the roster of talent on his sophomore LP, including J. Cole, ScHoolboy Q, Styles P and fellow Pro Era members Kirk Knight and Nyck Caution.

Check out Joey Bada$$’ cover art for All-Amerikkkan Bada$$ below.

Joey Bada$$ is a step closer to the release of his All-Amerikkkan Bada$$ album and today (March 13), revealed the project’s tracklist on Instagram.

The LP is made up of 12 tracks and includes features from J. Cole, ScHoolboy Q, Styles P, Meechy Darko of Flatbush Zombies and fellow Pro Era members Kirk Knight and Nyck Caution.

The lead singles for All-Amerikkkan Bada$$ are “Land of the Free” and the New York MC’s first gold-certified single, “Devastated.”

The original story is as follows:

Joey Bada$$ is paving his path to put his name alongside the greats as he prepares his new album. After claiming that he is a better rapper than 2Pac, new details have emerged about his sophomore album, formerly known simply as A.A.B.A.

According to the iTunes store from New Zealand, Bada$$’s album is officially titled All-Amerikkkan Bada$$ and is due out April 7. The title might be a slight homage to another West Coast icon as Ice Cube’s 1990 debut album was titled Amerikkka’s Most Wanted with a similar use of three Ks.

The project was originally scheduled for an Election Day release, but was postponed as rumors circulated that Bada$$ rejected an offer to perform for Donald Trump’s inauguration festivities.

The LP is made up of 12 tracks, most of which are unlisted, except for the already-released singles “Devastated” and “Land of the Free.” The former earned the New York spitter his first RIAA certification, a gold plaque.

Earlier this week, the Pro Era rapper promised a special announcement Friday, and technically it is 6 a.m. in the land of the Kiwis, so perhaps the project hits the United States store for pre-order Friday (March 3).

In speaking with HipHopDX about his new song “Victory” for NBA All-Star Weekend, he shared his excitement about the many Ws he was planning on locking up this year.

“I’m about to score another gold record on my first album,” he shared, “and I’m about to put out my new album, so yeah, it’s gonna be a lot of victories coming up and in 2017 in general so I’m super excited for that.”