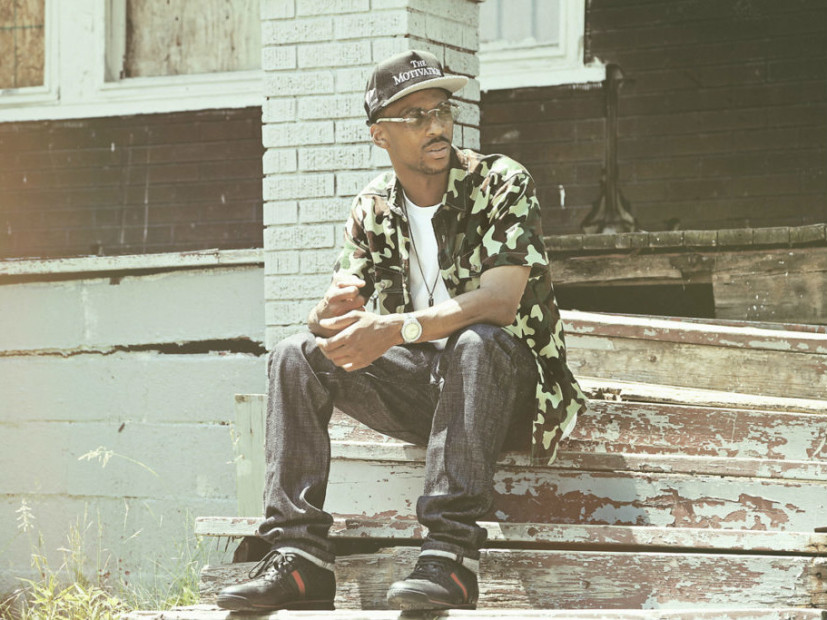 Boldy James sees a need for the different generations to come together and he’s seeking to fill the void with his music as he learns the importance of the grind from Nas. The Mass Appeal signee puts on for Detroit and sees the power that the city has, especially with a new life from Big Sean signing with Kanye West’s G.O.O.D. Music and having the #1 album in the country.

He’s making his own moves with the release of his Art of Rock Climbing EP with DJ Butter earlier this year, a project two years in the making.

“The project was in the works the whole hiatus, it’s just I felt like it was time to drop it,” James says in a phone interview with HipHopDX.

He got into some trouble with the law due to a weed violation and explains how he had to refocus himself as he continues his music career.

The 34-year-old rapper says the hardest part of being away was “just getting my mind right and getting out of my comfort zone. Just trying to step outside the box a little. That’s the hard part, the adjustment stage to like what’s going on from the two year hiatus, from the time I first took the break. ‘Cause a lot can change in music within those 700-some-odd days, that’s a lot of artists, that’s a lot of work been came and went. So I’m just trying to let my work be recognized and see if people still respect my craft.”

Woven into the seven tracks on the EP are guest features from some legends in the game, including Kool G Rap and Kokane. James explains his excitement at getting to work with artists he admired so much growing up.

“It’s like a dream come true, honor, privilege to be able to work with Nas, to be able to work with AZ, work with Kool G Rap, work with Pete Rock, work with Ghostface Killah, work with, you know what I mean?” he gushes. “I’m more accepted in the real grand scheme of things because the youngins, they consume and they’re fans, but they’re not die-hard Hip Hop fans, fans of the OGs who 20-plus in the game. It’s just a different view from where I’m looking at being from my standpoint. I’m learning every day it’s new levels, a new level.”

There has been much controversy over new artists such as Lil Yachty saying he didn’t grow up on rappers including The Notorious B.I.G. Boldy doesn’t name names, but he explains what he sees in the divide between the generations.

“The older cats tend to be able to catch up a little quicker and adjust to it,” he says of trying to bridge the gap. “Then the youngest, they’re just stuck on what they’re stuck on. They don’t wanna hear a lot of shit before the music that they listen to, their trial period. They don’t wanna hear nothing but what they era of what they consider to be the Golden Era of what music is.”

And he explains how different generations name different artists to define “The Golden Era” of Hip Hop. He says that it takes effort on both sides to be understanding.

“[The older generation] might not be able to pick up on the latest slang and all the shit that the young boys talking at the time, but the shit indirectly come from people before ‘em, they just take twist shit, alter shit, it’s a different translation,” he says. “So to be up on the new slang and to be able to tap into the same frequency that the young boys is on, it’s like a skill. To be quick enough to pick up on all this game because the game change very day, so if you ain’t really a player, then you’re not gonna understand the audibles that are being made. Gotta be a student of the game all around the board.”

Maintaining relevance and learning his place in the current environment of Hip Hop is the greatest lesson that Boldy has learned from Nas. He met the Queensbridge vet at SXSW a few years ago through DJ Whoo Kid, who hosted one of his mixtapes.

“Stay working because it’s easy for the attention to be shifted somewhere else,” he says of what Nas taught him. “You just gotta stay working and try to stay as relevant as you can. Because rappers, it’s so easy to forget about them and move on to the next new hot nigga, so you just gotta strike while the iron’s hot and you gotta stay consistent with it.”

And he’s been consistently writing rhymes since he started rapping when he was a kid, balancing that while playing basketball. He thought he’d make it to the NBA one day as he says every kid from the hood dreams of doing. He still carries basketball influences with him as he name drops plenty of players throughout his lyrics, but says he made the crossover to focus on music in middle school when he was preparing for a talent show.

“I was like more than ready for the muthafucka,” he laughs. “Like I had been prepping for this shit since the summertime, just knowing it was coming up. Then once I got over my fear of performing in front of people, it was pretty much a piece of cake. That’s the part that’s hard, getting used to the beginning jitters. Like you remember your first time having sex? Remember those jitters you got like wow this some different shit right here like I’m about to step into the big leagues. You get that feeling every time before you perform, but once you get on that stage and you see all those people and as long as your mic working, when it’s time to jump the shit off, you gotta get over that fear if you’re not a coward.”

His experience in basketball also lets him have freedom in his art. Known as “H2O” growing up because his jumpshot was “like water,” Boldy never felt he had anything to prove through rap.

“I try to just still keep it, make it a art as opposed to like just trying to say a bunch of shit that’s gonna get me enough exposure to be able to move my way around and now I’m just the new popular kid on campus and shit,” he says. “No, I always had a pretty bitch and a jumpshot, so this shit ain’t nothing new to me. I’m just trying to take this to new heights and do something out of this shit I never did before. Just make a mark in music.”

He says that he sees the bigger vision for all of Detroit with Big Sean and Danny Brown doing their thing. And of course, J Dilla is a legacy name that will always put the city on Hip Hop’s map. Boldy is seeking to serve as a sort of mediator between everything that’s happening.

“It’s coming back home, just got to make it a modern 2020 Motown type of city with the music scene,” he says. “But as long as I’m around here, I’m gonna try to keep a balance with the die-hard Hip Hop fans, the junkies and the young niggas coming up who just wanna hear a nigga talk about fast money and fashion, the latest cars, the new party scene, the baddest bitches out here, famous off a couple booty pictures and shit. This shit crazy.”

James is raising a daughter and was the only boy growing up with three sisters. He says this has a great impact on his craft as he tries to not expose women too much in his videos and he constantly seeks to balance what’s hot with his personal values. He sees how even people’s values, especially with technology, have changed over time.

“I’m from an era where if your parents didn’t directly have a hand in raising you, then the TVs and the radios and the video games and shit was raising kids,” he says. “Now they got the internet, so it’s a little different ‘cause everything’s so right there, hands on. A kid can just pick up their phone and see a naked woman. It wasn’t like that for us.”

He will continue his journey next week as he releases his House of Blues project February 27. He says he’s “got a whole new can of worms I’m about to open up with this.”

“We gonna have some fun with House of Blues,” he promises. “You’re going to get to party a little bit, let your hair down.”