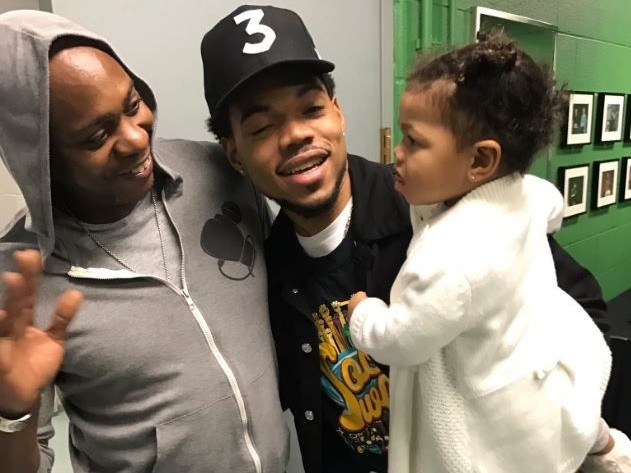 Chicago, IL – Comedian Dave Chappelle cracked jokes with the youth and offered words of advice yesterday (January 30), during a surprise appearance at Chance The Rapper’s Open Mike event in Chicago.

Not one to skimp on humor, Chappelle did provide the crowd of high schoolers with the occasional laugh, but also took time to offer a few life lessons, speaking on the importance of being able to feel.

Chappelle added that the responsibility falls on artists more now than ever to remind people “of themselves” and to “get ’em thinking again.”

“We need young artists out there,” Chappelle said while speaking to the crowd of students. “Because a lot of people come up to me and they say ‘Dave, you tell it like it is.’ No, I don’t. Never did. I don’t know what it is. I tell it like it feels like. People know so much information. But they forget what things feel like. So, the job of the artist is to remind them of themselves. Get ’em thinking again. Get ’em feeling again…You see who our president is. Gotta tell ’em what it feels like. This is important times. So, I hope you guys are up to the task.”

Thank you @DaveChappelle for the wise words and @chancetherapper for creating such an amazing event. Best Monday night ever. #openmike pic.twitter.com/JshOniCFXv

Also on hand for Chance The Rapper’s latest Open Mike event was the cast of The New Edition Story and Chicago Bulls player Jimmy Butler.

Open Mike was created to provide a platform for “young creatives building the next generation of cultural community.”

Other celebrity guests have included Kanye West and Vic Mensa, who performed a handful of tracks, including “U Mad,” “We Don’t Care,” and “All Day,” during an appearance in 2015. Jeremih also joined Chance at Open Mike last month.

Check out highlights from Chance The Rapper’s most recent Open Mike event below.

We at @OpenMikeChicago would like to thank @JimmyButler @DaveChappelle and THE CAST OF #NewEditionBET for comin to Chicago and supporting us pic.twitter.com/xuQl8OPJMt

Thank you @OpenMikeChicago @chancetherapper for such an inspirational night! You made me realize that anything is possible #NewEditionBET pic.twitter.com/Dk54YucgKJ

You never know what to expect @OpenMikeChicago! Thank you to all of our special guests that came out last night. You all are an inspiration. pic.twitter.com/is5WUGRw7s