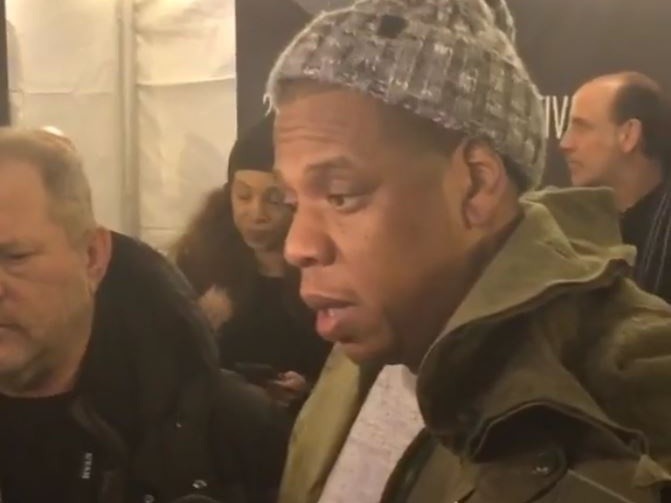 Park City, UT – While at this year’s Sundance Film Festival to help promote his “Time: The Kalief Browder Story” docu-series, Brooklyn wordsmith Jay Z took some time to speak with media about the project, which shares the story of the late Kalief Browder.

While discussing the series with reporters, the musician-turned-entrepreneur was blindsided by a question about President Donald Trump, who recently offered shade to Hov.

He swiftly replied with “I’m not gonna answer that,” before being ushered away by fellow executive producer, Harvey Weinstein.

Before the topic of Trump put an abrupt end to his convo with reporters, Jay recalled meeting Browder at his office and offering him encouragement.

“I heard about his story and I reached out to him,” Jay Z said. “I met him. He came to my office…It was meant to happen. And he came to my office and I just wanted to see him and tell him that — Give him encouragement for what he had just lost. Three years of his life that he missed. And just offer encouragement.”

If you don't know about #kaliefbrowder, do yourself a favor and find the closest ? or ? and get to Googling. // #jayz recounts meeting Browder via #sundancefilmfestival @spiketv premiere

Browder, whose story was also featured in Ava DuVernay’s Netflix documentary 13th, spent over three years in prison after he was charged with second-degree robbery and was unable to make his $3,000 bail. His case was eventually dismissed, but in 2015, Browder took his own life by hanging himself.

Throughout his time in prison and even after his death, Browder remained a symbol for prison reform.

“Time: The Kalief Browder Story” docu-series will air on Spike, and is scheduled to air sometime this year.