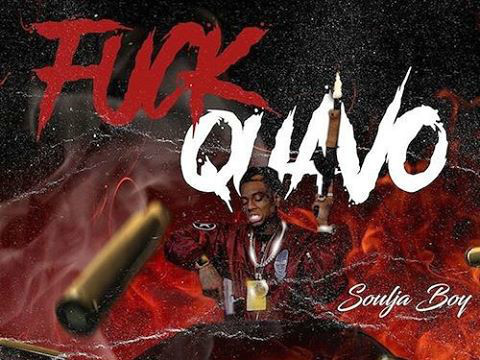 The latest victim of Soulja Boy‘s lyrical assaults is Quavo.

Soulja posted up on Instagram today (December 5) to share screenshots of an apparent text message conversation with the Migos rapper about “fake kicking it.” The conversation quickly escalated from Soulja Boy claiming he introduced Quavo to Sean Kingston and Travis Scott to threats of a physical confrontation. 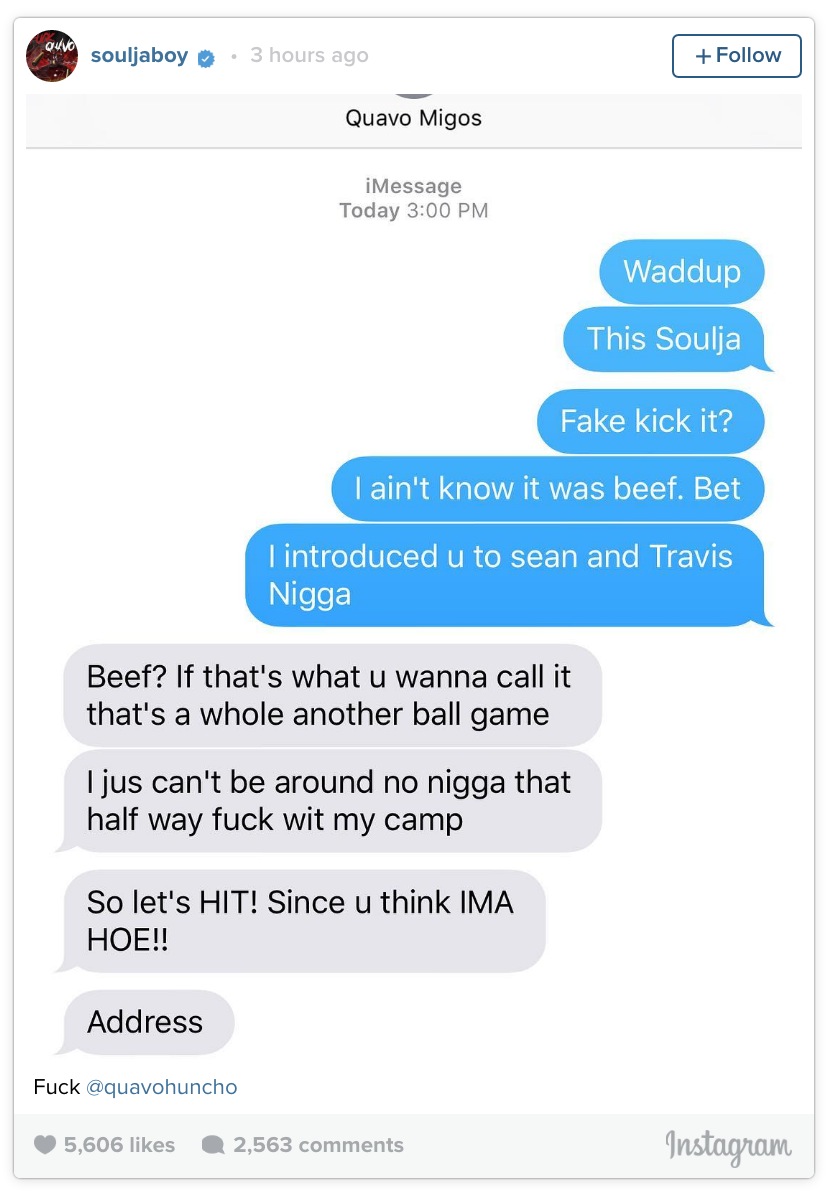 Apparently, Quavo didn’t show up, so Soulja Boy unleashed a diss track called “Fuck Quavo” where he threatens to pull up on the rapper with an AK-47. He also shared an impromptu video for the song on his IG, pointing various guns at the camera.

“Quavo say he want some beef with me, huh? Fuck Quavo, fuck Migos, pull on your block with a Draco,” the hook to the song goes.

Soulja Boy only gives the song one verse, as he says that’s all the “pussy-ass nigga” deserves as he again reminds the Migos rapper who he introduced him to and says that Quavo is mad Soulja Boy beefed with Lil Yachty over India Love.

“Quavo hit my phone say he want beef, musta not known I’ll knock out his teeth,” he raps before saying Quavo “stole my swag” and mimics Migos’ “Hannah Montana.”

Soulja Boy then goes on a rant about how Migos dissed Rich The Kid’s signee Famous Dex and says the members of Migos aren’t really from Atlanta.

Migos just gave Rich The Kid a major co-sign on his Keep Flexin’ mixtape, which featured the song in question “Dat Way” where Quavo raps “Your artists be taking my swag / I wonder If I can come take some of yours / When I go get a new Bentley I just want to double park it on the curb / We got the key to the city / You niggas ain’t heard, you niggas ain’t heard.”

They just be counting their money while Soulja Boy keep wilin’.

So tonight, Soulja is trending on Twitter and he is proud of it…

But maybe he doesn’t realize people are tweeting because they are more impressed with Migos’ “Dab of Ranch” freestyle than his diss track.

Dab of ranch is better than any song Soulja boy ever put out and it's not even a full song ?

soulja boy just mad he ain't got no chip bag with his picture on it ?

Soulja boy got me tight coming at the Migos like dat ?