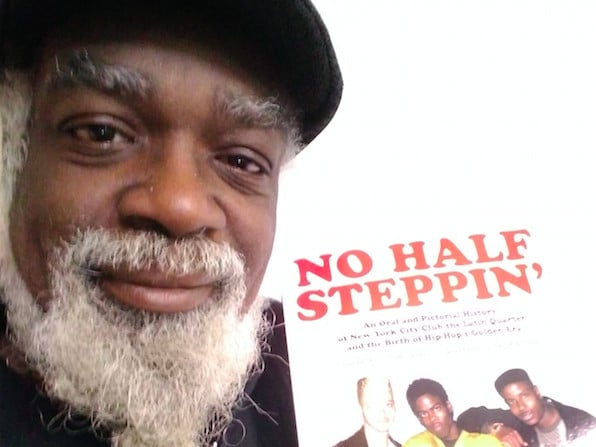 Authors Claude “Paradise” Gray and Giuseppe “u.net” Pipitone decided to capture the story behind the Latin Quarter in a new 212-page book, No Half Steppin’: An Oral and Pictorial History of New York City Club the Latin Quarter and the Birth of Hip-Hop’s Golden Era, which offers first-hand accounts of what the club did for burgeoning Hip Hop artists and the culture.

“I took interest in the Latin Quarter because I lived it,” Gray tells DX. “It’s not just a great chapter in the history of Hip Hop and music culture, but a legendary chapter in my own life. This is the story of my own personal history. I lived it and did not have to research it, hear about it or learn it second hand. Every story is etched in my memory for life.”

Featuring over 175 color photographs and flyers from the Latin Quarter era, No Half Steppin’ also paints a visual landscape of what kind of club it truly was — original.

“There are no clubs like the Latin Quarter today,” Gray says. “Times have changed. Artists have to pay to perform and sell tickets to get shows nowadays, today’s industry has co-opted Hip Hop. Where can you go to party with the biggest stars of any genre? Get your record played by the hottest radio DJs? Rub noses with the important label owners or walk in the club an unknown and walk out with a record deal after killing it onstage?”

In the days of MP3s, SoundCloud links and downloads, it’s tougher to make the same personal, one-on-one connection that an environment like the Latin Quarter provided. Gray and Pipitone were able to gather oral histories from participants like Chuck D, KRS-One, MC Shan, Eric B., Daddy-O, Fab 5 Freddy, DJ Clark Kent, Kurtis Blow, Grand Puba, Big Daddy Kane, Queen Latifah, and Kool G Rap for the book, who vividly describe what it was like having a place they could go to discover new music or simply meet like-minded people. Like countless New Yorkers, Gray was drawn to Hip Hop immediately and wanted to be a part of it.

“I was first attracted to Hip Hop watching Disco King Mario spin records in the building that we both lived in at The Soundview projects in the Bronx,” Gray remembers. “The interest grew while dancing at street jams all over the Bronx. I was marveling at the lyrical skills of Grandmaster Melle Mel and Grandmaster Caz, while watching the amazing DJ skills of Grandmaster Flash, Grand Mixer DXT, Grand Wizard Theodore and The Grand Imperial DJ J.C.

“I love that Hip Hop was for the people by the people,” he adds. “[It’s] the voice of the marginalized and oppressed. I have been involved with Hip Hip since its inception at every level — from a street DJ, MC, B-Boy, graphic artist, producer, promoter, writer, photographer to now curator and author.”

No Half Steppin’ is now available through famed music magazine Wax Poetics, a collaboration that came as a result of an interview with Gray conducted by fellow author Brian Coleman [Check The Technique Volumes 1 and 2, Rakim Told Me].

“[Coleman] wrote a great, lengthy story on me and the Latin Quarter for Issue #23 June/July 2007 with Rick James on the cover after his death,” he recalls. “It was a incredible issue and it sparked a great interest in the story, so when it was time to write the book, Wax Poetics was a no brainer as a partner and publisher.”

Any purveyor of Hip Hop culture will appreciate the vast knowledge of not only the authors, but also the artists who helped craft an entire culture. Legends were born in the bustling Times Square club. From A Tribe Called Quest and KRS-One to Schoolly D and Public Enemy, the role the notorious nightclub played was pivotal to that period of music.

“I hope the readers of No Half Steppin’ recognize and celebrate the many contributions that the Latin Quarter and its artists made to the legacy that is ‘the Golden Era’ of Hip Hop,” he says. “[I hope they recognize] the names and faces of the many people behind the scenes, as well as the incredible artists that were incubated and made their reputations and developed their skills at the Latin Quarter. I hope that they remember us and learn from our unity and collaboration. All things are possible if you stick together and use your personal creativity to excel. You can make changes and make a difference that can reverberate throughout the entire world.”