Lil Wayne Calls Himself A "Roc-A-Fella Millionaire" — Has He Signed With Jay Z? 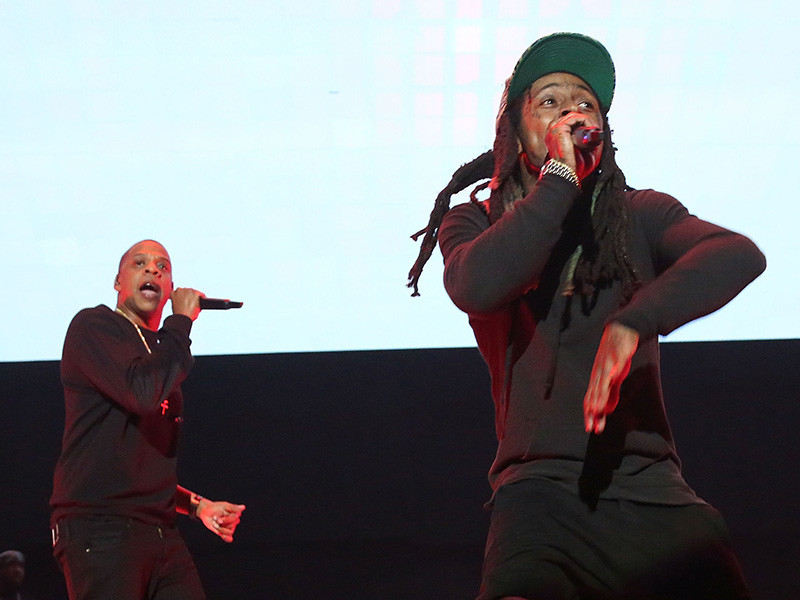 Lil Wayne has been feuding with his label, Cash Money, for years now … But has Jay Z dropped him an escape rope?

During a performance of “I’m Me” at the Camp Flog Gnaw festival in Los Angeles this past weekend, Lil Wayne replaced the line “I’m a muthafuckin’ Cash Money millionaire” with “I’m a muthafuckin’ Roc-A-Fella millionaire” setting off speculation that he might be signing with Jay Z’s label. And if that weren’t enough, Weezy also threw up the Roc-A-Fella symbol throughout the song.

Roc-A-Fella is defunct as a label now, though Jay Z’s Roc Nation enterprise continues to rep plenty of huge name artists like Kanye West and Rihanna. And though Wayne is in the running for GOAT rapper, his track record for making clear statements has taken a hit lately.

Still, in an interview with DJ Drama on Shade 45 earlier this year, Weezy revealed that Jay Z had tried to sign him years ago, offering him a $175,000 deal that Wayne balked at.

HipHopDX reached out to Roc Nation for clarity on the situation but didn’t hear back before publishing.

Fans have previously speculated that Lil Wayne was signing with Jay Z as an artist and were wrong. Back in 2015, Weezy said “I just signed a deal with my muthafucking idol Jay Z,” when referring to a deal with streaming service TIDAL. In 2015, Wayne’s Free Weezy Album dropped on TIDAL without Birdman’s consent.

There is another piece of evidence is this case, though. After journalist (and DX contributor) Eric Diep posted a video of Lil Wayne performing “I’m Me” with the comment “The Roc-A-Fella shoutout was random though,” frequent Lil Wayne producer Infamous chipped in with a “Not that random” and a mouthless emoji.

And we all know what the mouthless emoji means. Somebody’s got a secret.

At this point, Wayne is saying fuck Cash Money for life. This Roc-A-Fella shout-out was random tho: pic.twitter.com/DiJoo7zJWC