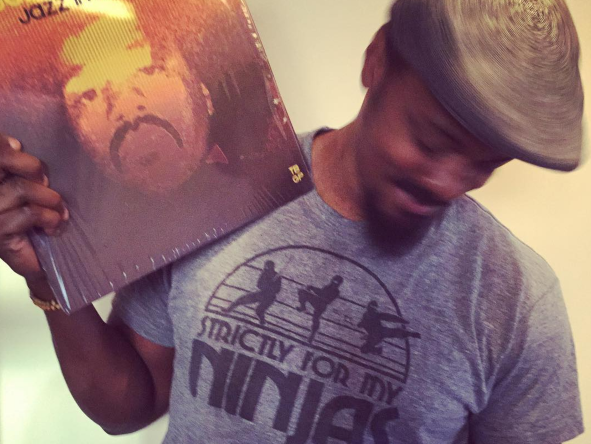 For much of Terrel Wallace’s a.k.a. Tall Black Guy’s career, samples have been his primary weapon as a producer. In his eyes careful, repeat listens and close study of potential sample material beats out owning a massive record collection. “You need to get inside of the song and really listen,” he explains to HipHopDX, ahead of his upcoming release, Let’s Take a Trip. “I don’t even really collect a lot of records. I go back and listen to all the stuff I already had anyway. Nine times out of ten I’m gonna hear it a little differently.”

“That’s the beauty of sampling. Once you do it for a while, you can manipulate the sounds any way you want to.”

The theme of the careful study is present throughout his work. With Tall Black Guy Vs. Michael Jackson, an earlier collection of Michael Jackson-sampled beats, Tall Black Guy says he wanted to take Jackson’s sound on Off the Wall and Thriller and “turn it on its head.” For one of the album’s standout tracks “Give ‘Em The Heat,” Tall Black Guy listened to MJ’s “Billie Jean” over and over again to figure out how to turn an uptempo dance hit into something that sounds like it was derived from an early Slum Village album. “I would listen to it all the way through for maybe like a week or so,” he tells me. “Once you get the chops, then you get the pattern you want, then you go on from there.”

Learning how to precisely manipulate sound is an exercise in patience, as Tall Black Guy would come to discover. If you’re willing to put in the work, he believes you can teach yourself to have a limitless ability to rearrange sound. “That’s the beauty of sampling,” he explains. “Once you do it for a while, you can manipulate the sounds any way you want to.” And while he believes in close examination of the music he samples, he tries not to overanalyze it. When asked if there was a deeper reason for picking some of the songs sampled for his Tall Black Guy Vs. Michael Jackson album he says, “I wasn’t even thinking like that. I was like, ‘I love this song, I want to flip it.’”

Just as he immerses himself in the music of others, he hopes listeners will do the same with his albums. But more than merely hold our interest, Tall Black Guy hopes to “take the listener on a journey.” This is especially true of the anticipated Let’s Take a Trip. While he was cautious about giving away too many details about the project, which is due out October 28th, he admits that he is feeling a mixture of excitement and a need to stop tinkering with his work. “I’ve been listening to this thing non-stop for the last few months,” he says. “I’m getting to the point where I think I’m done, because if I keep adding stuff it will drive me insane.”

Jeffessor X aka @djjazzyjeff thank you again for inviting me to one of the greatest musical experiences I have ever been to! #playlistretreat16 #djjazzyjeff #Igotsmine

Fans familiar with Tall Black Guy’s other releases will recognize names of featured guests like Diggs Duke and Ozay More. Samples will play a role in the album, but live instruments feature more prominently than in his earlier work. “I’m doing a lot of the playing,” he says. “I got different live instruments on there like horns and stuff like that.” Although the album is only available for pre-order to the general public, those who have had a chance to hear the album are already singing it’s praise. Giles Peterson wrote about Let’s Take a Trip recently on his website, calling the album an “indulgent musical experience” and praising it for being “jam-packed with fine production and intelligent design.” And at Okayplayer Zo claims that this is a departure from his “hallmark swing and soul” but is in favor of the new sounds on the album because “your boy can cook with heat no matter the texture.”

After recent work with First World Records, praise from industry luminaries, and a new album on the way, it seems that Tall Black Guy is ready to further expand his audience. But what direction will he head in next? Will he continue to make his primary focus instrumental albums or will he collaborate with more MCs, as he did with Skyzoo? Will he shift away from samples to more live instrumentation or will samples remain a key ingredient in his music? Only time will tell, but it seems that Tall Black Guy will continue to take listeners on a journey for many years to come.

Tall Black Guy’s Let’s Take a Trip releases on October 28. Pre-order the LP on Bandcamp to get four songs ahead of schedule.