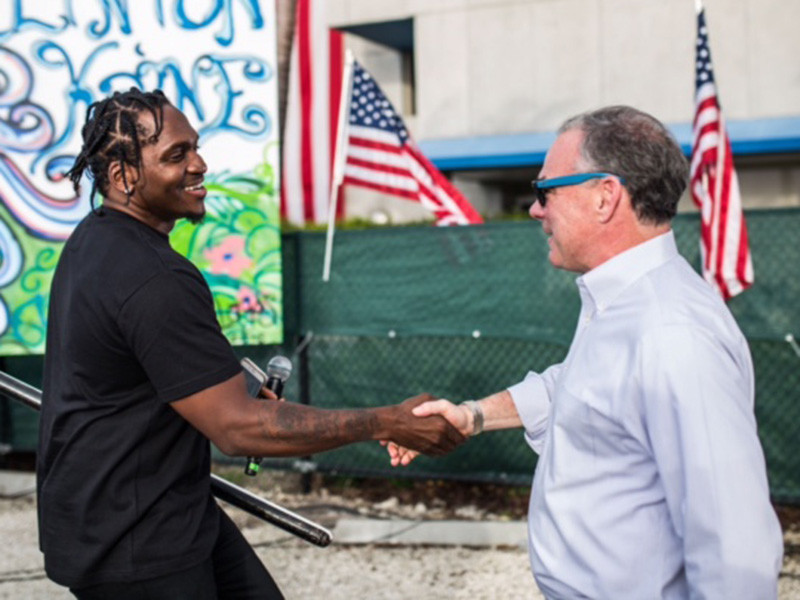 Pusha T helped introduce Kaine, who he dubbed “the future vice president,” and also stressed the importance of voting during the event.

“Basically, you guys know that the stakes are high for Miami especially. Florida especially,” Pusha T told the crowd. “We got to get the message out. We got to get out there and vote. We have to. We need to be heard. We need our voices to be heard. When we do actually get into those polls, we need to think about what’s important to us. What’s important for the community. And we need to pick Clinton and Kaine.”

Pusha T, who was also joined by Karen Civil, uploaded a photo of himself and Kaine on the day of the rally. He offered the following caption: “Politics as usual…”

Months ago, the Clipse spitter showed his support for Clinton by rocking a “Delete Your Account” t-shirt. This past June, the former Secretary of State popularized the phrase when she informed Trump to do just that. He also participated in a contest for Clinton where the winner got to meet him.

In addition to Pusha T, Clinton has also received the backing of DJ Khaled, Kanye West, and others in the Hip Hop community.

Although Atlanta’s Killer Mike is an avid supporter of Bernie Sanders, the Southern MC is also working to get the vote out and will hold his own early voting celebration at his The Swag Shop barbershop in Atlanta, later today (October 17).

The event is scheduled to take place from 6 to 9 P.M.