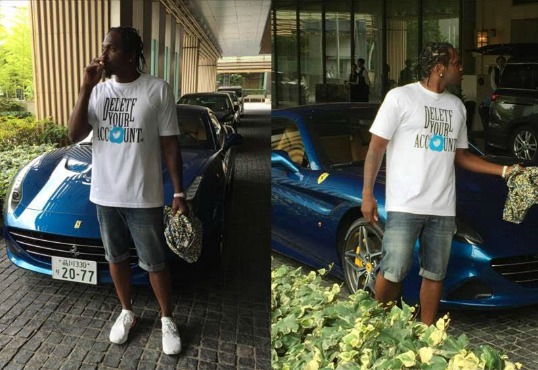 Los Angeles, CA – Following both Democratic and Republican conventions, it’s not looking good for Donald Trump in terms of high-profile endorsements. The list of staunch Republicans opposing their party’s candidate this upcoming election season is continuing to grow and naturally, Hip Hop is following suit in helping usher former Secretary of State and First Lady, Hillary Clinton back into the White House.

Last Friday, July 29th, GOOD Music President Pusha T let be known to all his social media following (more than 2 million users on Facebook, Instagram and Twitter combined) that he would voting for Mrs. Clinton and he showed it by rocking a limited edition Play Cloths t-shirt emblazoned with the infamous “Delete Your Account” phrase she used when retweeting Trump on June 9. After the Republican presidential nominee made a fuss of the Democratic President of the United States endorsing a successor from his own party, Clinton appealed to Black Twitter users and amassed nearly 500k retweets in the process.

In addition to the shirt, which was co-created by Karen Civil and the Marathon Agency, Pusha T also urged his followers not only to go out and vote but to get educated on all the details a ballot can entail on RockTheVote.com.

Political pundits and skeptics alike will be interested in knowing that proceeds from the “Delete Your Account” Play Cloths tee will benefit Reimagine Justice, a coalition committed to fund prison reform and post-incarceration rehabilitation. The movement is also in accordance with Clinton’s #BetterThanThis campaign, an in-depth look for purported doom a Trump presidency might spell for the country.

King Push was among several Hip Hop superstars who paid a visit to President Obama at the White House back in April and he has accepted the challenge of using his platform to instill awareness in the everyday American, as well as speak out against social injustices within communities similar to the one he grew up in 1990s Virginia.

Meanwhile, across the country, a couple of Los Angeles rap staples have also joined in the #BetterThanThis campaign. YG and Nipsey Hussle, recently collaborated on the former’s sophomore album, Still Brazy, via the song “FDT,” an explicit yet potent look as to how the hood may view Trump’s outspoken comments regarding race and social status. Although the record may be a tad too brazen for Clinton to directly champion, it goes without saying the sentiment is mutual within her camp.