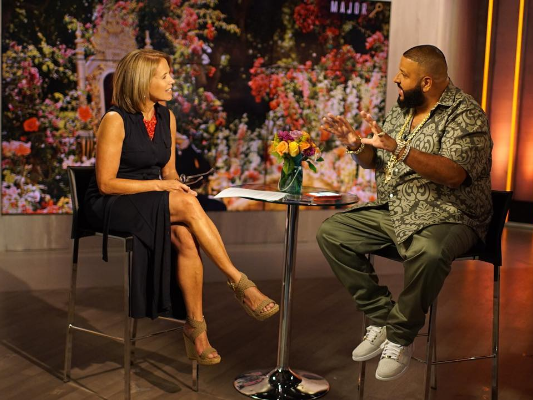 With the race for the White House intensifying more and more each week, both the Democratic candidate, Hillary Clinton, and the Republican front runner, Donald Trump, are out campaigning in search of every vote and drop of support they can get.

After endorsing Clinton on The Nightly Show with Larry Wilmore last month, DJ Khaled offered another wave of support for the Democratic candidate during a recent interview with Yahoo Global News Anchor Katie Couric.

When pressed whether he was referring to Donald Trump with his previous comments, DJ Khaled added: “Well, I don’t know him. But I know I’m not voting for him, no. Definitely not voting for him. The key is to vote because we need a vote to put the people in power that we want to represent us. So I’m definitely gonna vote for Hillary [Clinton]. Obama is my president. I don’t want Obama to leave house. He’s my president. He’s my guy. He’s my friend. Before I met him, I always felt like I knew him my whole life [and] that’s why he’s my president. Because when he speaks, you can tell it’s from his heart and it’s also from his intelligence.”

Katie Couric later asked how Khaled — a Muslim — feels towards Donald Trump, considering the controversial comments the Republican candidate has made towards the Muslim population.

Moving away from political chat, Khaled elsewhere opened up about some of the artists he most enjoys working and collaborating with.

Lastly, DJ Khaled announced that he’s set to reunite with Beyoncé for the third and final leg of the singer’s “The Formation World Tour” when it returns to North America at the start of September.