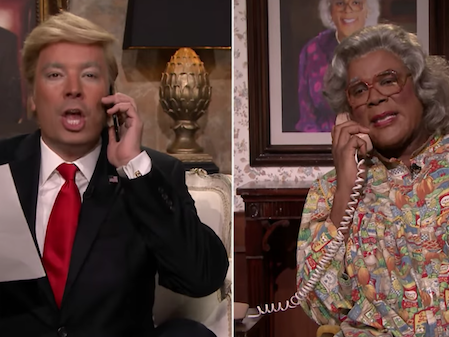 This week’s top 10 singles and videos is brought to you by Jimmy Fallon, who dressed as Donald Trump and battled it off with Madea. The Game previews two new singles from his 1992 album and Kevin Hart freestyle battles Lil Wayne at the BET Hip Hop Awards.

Madea Goes In On Donald Trump

Donald Trump, played by Jimmy Fallon during a skit on The Tonight Show With Jimmy Fallon, made a cold phone call to Tyler Perry’s Madea that didn’t go over too well after she calls him out for mispronouncing her name. Well, for just calling her period.

“First of all, my name is Madea. MA-to the damn-D-E-A,” she scoffed before answering what her biggest concern about this election.

“You,” she said. “You are my biggest concern. Next question please.”

Carrying over from last week, Kevin Hart as “Chocolate Droppa” in a freestyle battle with Lil Wayne is still a DX favorite.

Kevin Hart’s What Now? debuted in theaters Friday (October 14) and the comedian dropped a mixtape of the same name under his rap alias Chocolate Droppa.

View the Top 10 for the week ending October 14 below: