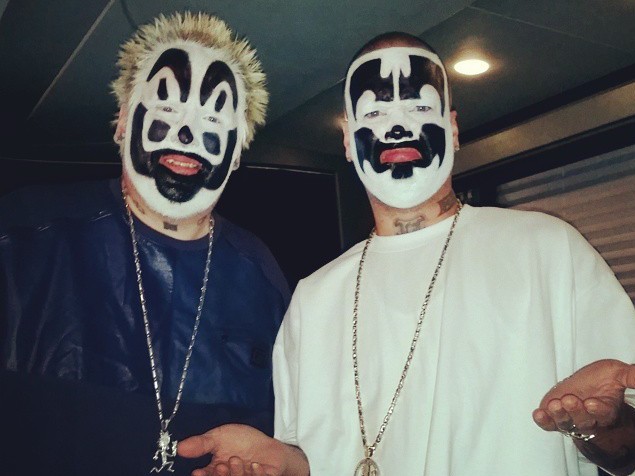 Detroit, MI – Creepy clown sightings have popped up all over America this Halloween season, taking over news headlines. As the recurrence of these clowns become more frequent, TIME decided to reach out to Hip Hop duo Insane Clown Posse to get their take on the growing trend.

Violent J, one-half of the pioneering Detroit rap group, blogged about the clown sightings for the publication and flipped the script; citing Big Government as being the real clowns wrecking havoc upon America. He says these are the facepaint-free clowns who are suppressing the rights of American citizens every day.

“These clowns threaten the very fabric on which our nation was supposedly founded upon—and for some fucking crazy-ass reason, they’re getting away with it,” Violent J, 44, wrote. “From keystone-cop clowns shooting unarmed citizens to racist clowns burning down Islamic centers or clowns in the NSA spying on us through our cell phones and laptops, America has turned into something far more terrifying than Insane Clown Posse’s Dark Carnival. Even a scrub like me who dropped out of school in ninth grade can see what’s going on. Today’s reality is scarier than anything you’ll ever hear on one of our albums.”

He continues to collate a list of facts on how their fans, known as Juggalos, have been specifically targeted by the FBI and have been categorized as a gang in their National Gang Threat Assesment list since 2011. They’ve since been working with the ACLU to prove to the U.S. Justice Department that labeling their fans as a gang is insane.

“Recently, there was a probation officer who was let go for being identified as a Juggalo, and her employer had no problem writing it as the reason for her severance in her termination paperwork,” J continues. “Others have lost their jobs, custody of their kids and been subject to illegal search and seizure.”

ICP further addressed the so-called “killer clowns” causing mass hysteria across the country on their Facebook after being bombarded with requests for their opinion since their persona is clown-based. They point out the same thing happened decades ago when Stephen King released his novel It in 1981.

The disturbing clown sightings first began in South Carolina and now there have been dozens of reports of more clown sightings across the nation such as New York, Florida, Virgina, Ohio Michigan and Wisconsin among others. Speaking of Michigan, two teenage females were recently arrested and face misdemeanor disorderly conduct charges for terrorizing a younger group of girls.

Rolling Stone wrote a full report on the spottings, dissecting the timeline of clownish events.

For a quick recap, watch the video below: