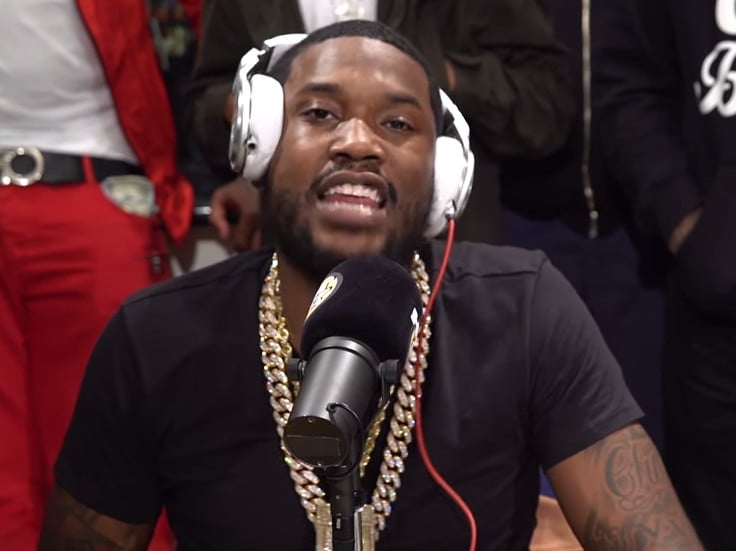 New York, NY – Meek Mill fanned the flames of his beefs with Beanie Sigel and The Game on his Hot 97 freestyle today (September 30) with Funkmaster Flex.

“Niggas talk about me / They see me and never say shit / Keep ’em suckas dipping and dodging like it’s The Matrix / Heart full of hatred / Show it on the internet / Weirdo niggas in my comments, but we ain’t into that,” he raps, explaining why he turned off his Instagram comments. Beanie Sigel blasted the MMG rapper for caring what the “peanut gallery” was saying and thought that was the reason he turned off his Instagram comments.

After he posted an IG of a supposed text message from Sigel, Meek Mill took more swipes at Beans in the freestyle for questioning the younger Philly rapper’s stake in the City of Brotherly love.

“They like Meek Milly won’t you spit that crack again/Fake niggas up three bring us back again/Riding down Broad Street I’m in that back again, I bully niggas I’m like Mack again, Philly,” he spits, referencing the Broad Street Bully (which happens to be the name of Sigel’s fifth album).

He takes more shots at those who question his relationship with his girlfriend Nicki Minaj. Sigel said that part of the reason tension bubbled between him and Meek was because Meek shared some information with the legend that he shouldn’t have. The Game also started his beef by threatening to give the Queens MC the “pool stick.”

“Posted up with Nicki/That’s when it get tricky/Niggas in they feelings/That’s when it get Drizzy,” Meek raps, throwing some shade at Drake, too. Funkmaster Flex was instrumental in fanning their beef as he released Drake’s apparent reference tracks after Meek claimed his OVO foe used a ghostwriter.

Meek Mill wraps up his seven-minute freestyle with some final words for The Game and his social media bullying.

“Kill ’em with success / They gonna kill me with emojis / Kill me with a meme / You pussies never could expose me,” he says.

In case you were wondering where Dreamchasers 4 is — he did say it would drop in September, and here we are on the last day of the month — Meek says it’s on the way.

Check out Meek Mill’s freestyle dissing Beanie Sigel and The Game (and Drake, too) below.