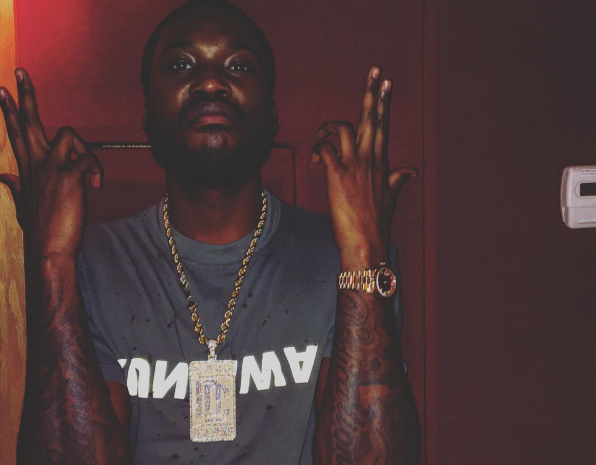 Philadelphia, PA – As the whole rap world tuned into Beanie Sigel’s tell-all interview with Taxstone, Meek Mill was obviously dialed in as well.

The most explosive moment in the aforementioned interview was revealed when the topic of the infamous Drake Vs. Meek battle came up and the Broad Street Bully brought up a potential scenario that involved Nicki Minaj sleeping with Drake before she was rocking a Dreamchasers chain.

“What’s the real reason why you was mad at Drake?” Sigel poised to the question on his episode of Tax Season. “In my point of view, you was laying in the bed one night, you rolled over and you looked at her cuz, and you asked her, ‘You fuck that nigga?’ And she ain’t answer you in the way you wanted to. That’s what I think. I don’t know, I don’t know. But that’s my POV of it. And believe that’s the majority of everybody’s POV of it. ‘Cause who cares? Where’d that beef come out? What point you gain from coming at that man like that? None.”

On instinct, Meek took to Instagram (blocked comment section and all) and shared a text message that strongly hints was sent to him by Sigel prior to the Taxstone interview.

“ONE MIN THEY TALKING LIKE THIS BEHIND CLOSED DOORS THEN THEY TALKING LIKE THAT? I CANT BELIEVE “niggas” went out like that …,” an infuriated Meek wrote in all caps. “THIS WHY I GOTTA CHANGE MY NUMBER LOL … HOW CAN THESE Niggas THINK THEY THOROUGH EVERYBODY ON THE “NEEDLE” that attention needle!”

Part of the contents of the text message not only bigged up Meek’s rhyming ability but also his relationship with Nicki as it read, “Them niggas can’t rap better than you they swag no zero, they really pussy’s on the low,” reads the text. “Niggas mad because you young fly Philly n*gga with a bad boss chick that stand for something … You just the only one holding us down right now on some real shit.”

It also included a blatant swipe at their fellow Philly rapper Lil Uzi Vert: “Uzi can’t [hold the city down] he wear pocketbooks with purple hair … It’s strength in numbers.”

Meek distanced himself from that particular comment as clarified on Instagram, “@liluzivert don’t mind that shot that’s how niggas talk when you winning!”

The full screenshot of the text message and Meek’s rant can be found below. Obviously, this isn’t over. Click here to listen to the now classic Taxstone interview.