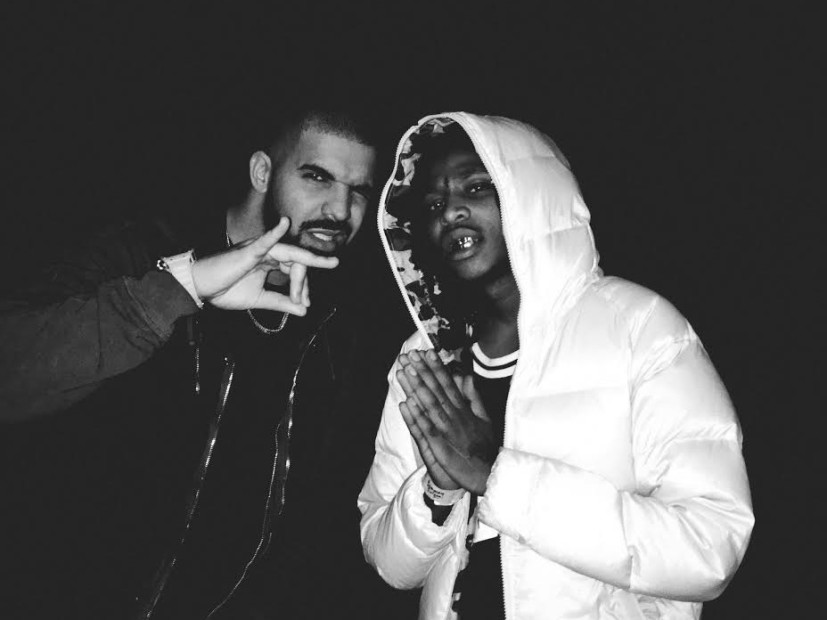 Nef The Pharaoh still hasn’t woken up from the dream of appearing on stage at Oracle Arena repping the Bay Area with the legends.

Drake welcomed out Nef to join him alongside Mistah F.A.B. and Mac Dre‘s mom at his Summer Sixteen Tour stop September 14 in Oakland. The 21-year-old MC compares the moment to the iconic nature of Diana Ross welcoming Michael Jackson on stage with her.

Nef has built his name expanding past a strong presence in the local music scene, from 2014’s “Bitch, I’m From Vallejo” to the hit remix of “Big Tymin’” with fellow West Coasters YG and Ty Dolla $ign.

At Drake’s show that night, not only were the musical legends represented, but Golden State Warriors and 2015 NBA Champions Stephen Curry and Draymond Green were present as well.

“To be onstage with [Mac Dre’s] mom, Mistah F.A.B. doing the thizz dance with Drake, it was just a big Bay Area moment of Bay Area history,” Nef explains. “It’s something that kids my age or young adults my age, they’re gonna tell their kids 30 years from now about that day.”

Nef doesn’t have a lot to say about Drake’s other headline that night — he responded to Kid Cudi’s twitter diss by telling the singer to “Cud-it.”

“I heard him say what he said,” he says. “I didn’t know what he was talking about until I read about it tomorrow and I was ‘Oh, that’s none of my concern. That’s none of my business.’”

But as a “die-hard” Warriors fan, Nef is more than happy to talk about basketball and the high expectations he has for the team welcoming MVP Kevin Durant.

Nef is making his own squad moves as he is preparing to release videos with G-Eazy and Juvenile. He just finished up touring with the fellow Bay Area rapper, but says he was extra excited to work with the New Orleans legend.

“That’s my favorite rapper,” he says of the former Hot Boy. “It was just, when I was with him, I’m not gonna lie, I was straight fanboy. I was quiet ‘cause I couldn’t even really think of words to talk. When we were shooting the video, I could just hear him behind me rapping my part. It just gave me more fuel to the fire. It made me go harder. It was like I was playing dope basketball game or a dope football game with my coach. It was trill. It was dope. He’s like, ‘That’s why I fuck with him. I can hear me in your music.’”

Bringing it back home, someone else who has inspired Nef is E-40. The Bay Area legend included the up-and-comer on his “Slappin’” single. With his own incredible staying power, E-40 has encouraged the new torch bearer to stay hungry and continue his climb to greater and greater heights.

“40’s always taught me to stay hungry and humble,” Nef says. “A lot of people, they just get to a certain point in their career and they stay there and they’re satisfied. When really I just look at it like as long as I stay in the rap game, as long as I’m alive, as long as I’m breathing, I’m gonna always play this game like I’m a freshman, like I’m the freshman trying to prove myself. Like I’m trying to prove a point, like I’m trying to earn that spot. I don’t ever wanna be satisfied. Cause once you’re satisfied, that’s when they stop caring about you, that’s when you stop working hard. I never wanna be satisfied. Even though we selling out shows, I used to perform in front of five people and five people turned into fifty, fifty to five hundred, five hundred, five thousand, seventy-five thousand people. It’s crazy. I’m never gonna get satisfied. I’m always gonna stay hungry.”

The 75,000 people show was Florida’s SunFest where he had to perform nearly an hour-long set without cussing, which he admits was difficult, but is proud to have made it through. Nef will take the lessons he’s learned on tour with G-Eazy onto his next album, The Big Chang Theory, which is hoping to drop in January. Another memorable tour stop for him was celebrating his 21st birthday in Denver, legal weed and all.

Nef The Pharaoh is feeling really positive about his musical journey, the people he’s networked with and just his overall purpose in life. He says he’s having fun but knows that there is only so much he can control. The rest he has peace in leaving up to a higher power.

“I feel like if you really manifest on something, that’s how the world works,” he says.” I believe when human beings are born, they send out these vibrations and those little mini vibrations touch every person that they’re gonna meet in the world whether they know it or not. They’re attracted. It’s always gonna come to you. These people are gonna come to you. You’re gonna come to those people and I just feel like all of this is meant to be. I’ve met everybody I’ve wanted to meet. DMX, Kanye West, Jay Z, Beyonce, DJ Khaled, fucking, I can’t even name ‘em all. Drake, Future, me and DJ Esco are friends. We talk on a daily basis. This shit is crazy. So I never take any of this for granted. I never put myself on a fucking pedestal, feel like I’m better than anybody. Every morning, I wake up, I thank God for being here. If I’m in the club and I feel like I’m having too much fun, you might catch me with my eyes closed and think I’m high, but no, I’m really praying, thanking God that I’m here and I’m having this fun, just asking him to protect me and keep me out of harm’s way.”