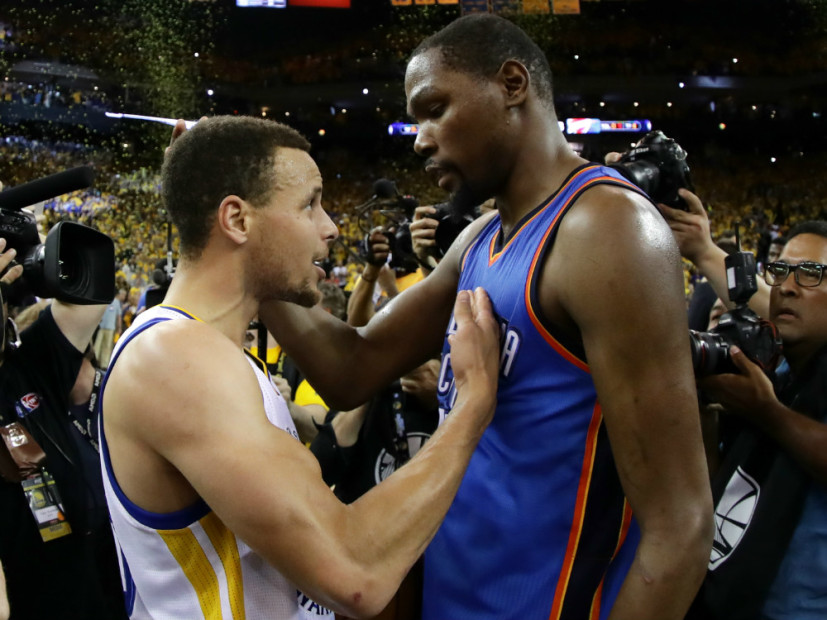 Oakland, CA – The biggest question of 2016’s NBA Free Agency has been answered. Kevin Durant is a Golden State Warrior.

The MVP made the announcement on The Player’s Tribune, the same platform where Kobe Bryant shared the news of his retirement. In his post, Durant explains that the decision-making process was an emotional one for him, but he had a clear vision of what he wanted.

“The primary mandate I had for myself in making this decision was to have it based on the potential for my growth as a player — as that has always steered me in the right direction,” he says. “But I am also at a point in my life where it is of equal importance to find an opportunity that encourages my evolution as a man: moving out of my comfort zone to a new city and community which offers the greatest potential for my contribution and personal growth. With this in mind, I have decided that I am going to join the Golden State Warriors.”

Durant is expected to sign a two-year deal worth $54.3 million to join Stephen Curry, Klay Thompson and the 2015 NBA Champions, according to ESPN.

The 27-year-old superstar was drafted in 2007 by the Seattle Supersonics. The team moved to Oklahoma City the next season. Durant takes the time to thank the franchise for nurturing his career.

“I’m from Washington, D.C. originally, but Oklahoma City truly raised me,” Durant continues. “It taught me so much about family as well as what it means to be a man. There are no words to express what the organization and the community mean to me, and what they will represent in my life and in my heart forever. The memories and friendships are something that go far beyond the game. Those invaluable relationships are what made this deliberation so challenging.”

KD reportedly met with six teams before making his decision. Jay Z was supposedly trying to get the Roc Nation signee to also meet with the Brooklyn Nets and New York Knicks, who recently signed Derrick Rose, but Durant declined.

Durant has been cursed by Lil B the BasedGod after he called him a “wack rapper” back in 2011. During the Western Conference Finals this year against Golden State, the BasedGod reaffirmed his curse on Twitter. The Warriors went on to lose the series after going up 3-1.

Update: Lil B has responded.

But check out other Hip Hop reactions below:

KD joined the Warriors so he could get that damn curse lifted smh. "Basketball Decisions"

Nigga pick the Warriors in 2k it's a fade!!!#cheatcode

Someone make sure the owner of the OKC Thunder doesn't press send on that letter.

NBA gone be interesting next year, I'm excited to see all the changes in motion.

KD to the Warriors is an automatic slaughter

Lol yeaaa @KDTrey5 you gave OKC all you had bro. Time for all superstars to pull a lebron and try to get a ring with a dreamteam why not

I think the Warriors can average 130 points a game next year. HAHAHHAHAHHAHA!

Lol at people who are mad KD wanted to play for a better team. What part of the game is that? Let that man live.

So yea it's not a trade but STILL, samesies