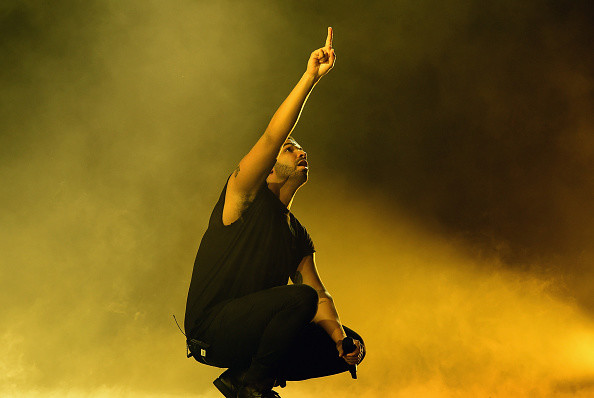 Oakland, CA – Kid Cudi likely knew his Twitter outburst directed at both Kanye West and Drake would get a response, and the rebuttals came a lot sooner than many people anticipated.

A passionate Yeezus expressed both anger and hurt during his Tampa Saint Pablo Tour pit stop last night (September 14) when he basically called out the kid from Cleveland for biting the hand that fed him. And, allegedly teaching him how to wear skinny jeans.

“Do you know how many people wish they could be signed to GOOD Music, get their life changed, have an opportunity?” Ye screamed on Cudder at the Amalie Arena. “Never forget that! I am so hurt. I feel so disrespected. Kid Cudi, we are two black men in a racist world.”

Across the country in another sports stadium; different time zone, Drake also addressed the tweets that claimed he used “30 ghostwriters” just to belt out a hit in real time.

During a brief intermission at Oakland’s Oracle Arena, Drizzy interpolated O.T. Genasis’ gold-selling record, “Cut It,” telling the crowd, “Boy, you getting way too high, you need to Cud-it.”

Yeah, it may have been a bit “Canada Dry-ish” this side of Common but it got a rise out of the crowd, who had obviously got wind of the Cudi tweets hours prior.

“I heard boys were talking down today. Shout out to my brother Kanye West. We both got sold-out shows,” Drake pressed on.

The final tweet of Cudi’s fiery rant stated that he was out for “peace and love” and his next response would be channeled through the music. Whether that’s a further explanation or full-fledged diss song remains to be seen.

Check down below for Drake’s Kid Cudi speeding bullet deflection.

#drake responds to #kidcudi "boy u getting way too high .. U need to CUDD IT"