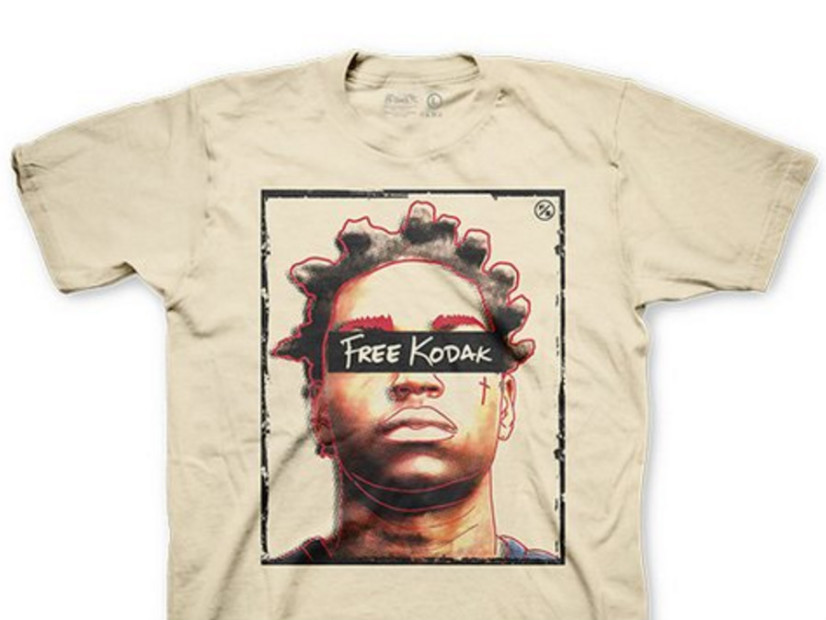 If you think so, you can purchase a “Free Kodak Black” shirt at Fly Supply.

The 19-year-old rapper is in jail on multiple charges, including weapons and marijuana charges and traffic violations after an April police chase. Kodak Black hails from poverty-stricken Pompano Beach, Florida. He had to miss out on co-headlining the “Parental Advisory Tour” with Lil Uzi Vert because of his incarceration.

Fly Supply says its mission is to help the artist continue his journey towards success. Proceeds from the shirts go directly to Kodak’s family to help pay for legal fees.

“Far too often, we’re quick to berate those that make mistakes, kicking them down instead of helping them up,” the company says. “Sadly, this is the society we live in today…. But by supporting this movement, you’re helping to spark some much-needed change, and provide some support for a young black man caught in the grips of the institution who can maybe help bring on that change, once his potential is fully realized. He’s a product of his environment, one in which the chance of escape is slim to none; and he’s also the voice of a people who share similar circumstances. Let’s make sure his voice is heard.”

DJ Khaled rocked the shirt in one of his recent Snapchat posts. He enlisted Kodak Black for a “Lockjaw” reunion with French Montana to perform “Pick Apart These Hoes” on his Major Key album.

Pre-order your very own “Free Kodak Black” T-shirt at FlySupplyKodak.com for $25 until Friday, when the price is raised to $34. The shirts are scheduled to ship August 19.