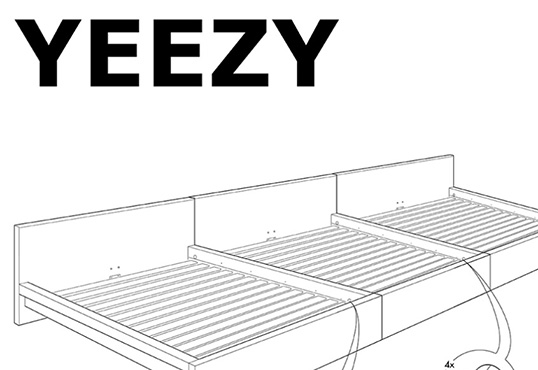 IKEA has been sending mixed messages to Kanye West, who expressed interest in collaborating with the Swedish furniture giant in an interview this week.

“I have to work with IKEA,” Ye told BBC Radio 1. “Make furniture for interior design, for architecture. I know that if I do a minimalist apartment inside a college dorm where the TV goes on the side of the wall — yo IKEA, allow Kanye to create, allow him to make this thing.”

A spokesperson from IKEA told CNBC the company had no immediate plans to work with the rapper.

“At IKEA we are constantly curious about different people, companies, artists and events around the world,” the spokesperson said. “To have these connections and inspiring meetings is an important way for us to find new ways to create a better everyday life for the many people. Although we are really flattered by Kanye West’s high interest in IKEA and the speculation around a joint venture, we have no plans to collaborate at this point in time.”

But then the Facebook page for IKEA’s Australian operations released a Kanye-inspired design playfully named YEEZY. The caption reads: “Hej Kanye, we’d love to see what you’d create…we could make you Famous!”

Yeezy’s been vocal of his love of IKEA and of furniture design on Twitter and visited the company’s headquarters in March.

Royère doesn't make a Polar bear bed but the Polar bear couch is my favorite piece of furniture we own pic.twitter.com/tSJgikAUmT

Kanye’s desire to design furniture didn’t come out of nowhere. In his much-maligned, mostly vague DONDA chart, “Furnishings” were listed in the categories of influence (along with both holograms and hovercrafts).

Here is my Donda chart that I wrote 4 years ago that everyone laughed at… pic.twitter.com/g1po6Z3H55

This isn’t even the first time IKEA has waded into the waters of Hip Hop. In 2014, the company’s Canadian Twitter account traded a few tweets with battle rapper Dizaster, referencing lines from a couple King Of The Dot battles.

@IKEACanada u still takin applications? One of this guys ===> @knamelis relatives is lookin for a job, he has experience in the field

@MRDIZASTER @knamelis @905Arcane Arcane? That’s a hard name! Sorry for the late reply, but you’ve always had a problem with time 😉