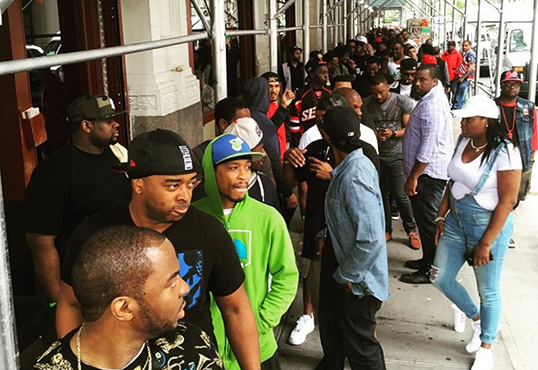 Is Battle Rap Getting Kicked To The Curb In New York City?

It’s been a tough year for Hip Hop in New York City. The first six months of 2016 saw many rap concerts canceled because of a combination of bad weather and closed venues. There was also the highly publicized backstage shooting involving Brooklyn rapper Troy Ave during a concert at Irving Plaza that killed one man and sent waves of chaos through the city’s music scene.

In the weeks after that tragedy, many shows from promoter Live Nation were axed, including performances from Vince Staples, Joey Bada$$, YG and Mac Miller. Bookings for some rock bands were affected too, although a concert from pop-rock band Train still went according to schedule at Irving Plaza days after the shooting.

Eric Beasley is a man who knows the challenges of finding a suitable venue for a rap show in an often crowded marketplace. He’s the businessman behind the URL, the world’s largest street battle rap league. The company’s profile has grown over the last few years, thanks to co-signs from professional athletes and mainstream rappers, as well as a nationally televised spot on BET’s “106 & Park” for a couple of seasons before the show shut down. Many of the league’s most popular MCs have found success in other lanes, with Murda Mook and Tsu Surf making a push with their music careers, and battlers like Conceited, Hitman Holla and Charlie Clips appearing on Nick Cannon’s comedy/improv/battle rap show “Wild ‘N Out.”

The URL fan base has been growing online and at live shows in New York City, with the league regularly selling out the same venues that some mainstream artists play in. The league jumped from venue to venue for a few years, but recently found a home for their mid-to-large scale events at Live Nation venues Irving Plaza and Gramercy Theater, where they have flourished.

He says it’s the same story at Webster Hall. “We got the record in Webster Hall. We’re tied with The Killers and The Rolling Stones.”

But despite the big paydays that the league is bringing to venues, many are still unwilling to work with the URL. Beasley explains that there is a stigma around battle rap, and that it is often misunderstood as a violent culture. With battlers spending much of their time on stage barking threats of violence in each other’s faces, it’s easy to see where the idea comes from, but looking at the big picture it’s actually incredibly rare for battles to erupt into physical altercations between the participants.

In the history of the league, there has been only one incident where one rapper punched another in a battle. That incident, when Math Hoffa punched Serius Jones at “Summer Madness 3” in 2013, damaged URL’s relationship with the Stage 48 venue where the battle went down and also led to the league banning Hoffa for several years.

“Stage 48 cut ties with us based on the Math Hoffa and the Serius Jones incident,” Beasley said. “However, I do think the punishment received is unfair because if you go to any average Hip Hop event, you go to a Kenny Chesney concert, or anything else where you have a preponderance of people in one location, there’s going to be a friction, it’s just human nature. So people fight, they get thrown out, the party continues. We had one incident when one person hit another person but it wasn’t like he couldn’t recover, or there was an ambulance called, or somebody got stabbed, shot, hurt. It’s what happens in their establishment every night, every week, at a party. They have fights, two or three fights a night.”

URL has also faced issues with venues who just don’t want to risk having them there.

Webster Hall hosted what many fans consider the best battle event of all time, 2012’s “Summer Madness 2.” It drew a packed crowd, along with celebrities like Puff Daddy, Busta Rhymes and Q-Tip, who cheered on the battlers from the balcony.

After several events at Webster Hall, the venue cut the relationship with URL because of pressure from the community board over fans flooding the neighborhood in the daytime, Beasley said.

“Battle rap is not a club. It’s a performance. It’s a show,” he explained. “Everyone arrives on time. People were arriving at 9:00 – 10:00 in the morning with lines around the block in both directions. The community comes outside and says ‘Oh my gosh there’s all these people! What’s going to happen?’ Then they call the police, and they make complaints, even though every night, the block is populated for like the DJ Khaled events, or whatever the mainstream artist is showing up. I guess in the daytime they don’t want to see us.”

Beasley said the battle fans weren’t causing any problems outside of the venue and that Webster Hall was facing pressure from a source URL couldn’t control.

“We didn’t have one incident, not one fight, not one ‘Oh, I want to get in first!’ Everyone is in line peacefully and almost like hippies at a rock concert down the block and around the corner,” he continued. “It was never a thing where there was an incident that made them feel like they needed to cancel when they knew we were coming back. The community board, which has a lot of power, within that precinct, called, and called the precinct and told them to cancel the show. It wasn’t really Webster’s call because the community review board is what kind of allows them to operate as a business in that district. If the community board is against them, they can give them problems … When the community board sees a bunch of the Hip Hop crowd standing around, I guess they feel threatened or nervous or whatever you want to call it for whatever reason.”

Beasley explained why battle rap fans are so committed to arriving at a show early.

“The average battle rap fan is not coming out to an event to fight,” he said. “There’s a certain level of dedication to go out to an event. If you’re paying $100 and getting out of your bed on a Saturday at 9:00 in the morning to be somewhere, your goal isn’t to fight. That’s a sporting event crowd. It’s a Hip Hop sporting event. You’re not there looking for girls — you’re coming to see a battle. It’s like a sporting event.”

Even with the issues he’s faced, and the worries around Hip Hop shows that venue owners might have, Beasley still thinks battle rap and Hip Hop will continue to have a home in New York. It might just come at a premium.

“It’s tough because you have club owners who have these clubs and businesses and it’s their livelihood,” he said. “So they want to make sure they’re not getting additional pressure from the police and their precinct and that they’re able to keep their businesses running and thriving without anything happening. Especially with the way the media hypes stuff, it makes people nervous, it makes them scared, it makes them not want to take any chances. That’s one side of it, but then the other side is you have opportunists who say, ‘Hey man you can come to my club, but for Hip Hop I got to charge you extra because I’ll need more security and I’ll have to do this and I’ll have to do that’ and then they end up giving you this same thing that you were going to pay for at the regular price. That’s happened to us in a few situations even before this incident happened where people typically charge us more money because we’re Hip Hop. It’s tough and it’s tricky, but it’s part of the game and it’s part of the obstacles that we deal with. But I think right now you’re going to get some resistance but ultimately these clubs need the money. They need the business that Hip Hop brings.”

Even considering these implications, Beasley believes it’s unfair for his company to be penalized for an incident just because a rapper was involved.

“I think it’s a testament to battle rap’s power and the direction that it’s going in and develop the potential that it has to stand above its own as a form of Hip Hop entertainment,” he said. “I’m happy about it and we just got to keep pushing. But yeah we definitely felt a sting from this whole [Troy Ave] situation and again it’s an unfortunate situation that the guy Banga passed away and some things need to happen as far as finding these answers. But it’s definitely bad that stuff like this puts a strangle hold on the whole culture and the whole culture is demonized because of one incident that has taken place, when every other genre has had incidents like this take place during their events but they’re not labeled as the source of the trouble.”

URL’s next event goes down Saturday (July 9) at the Highline Ballroom in Manhattan.