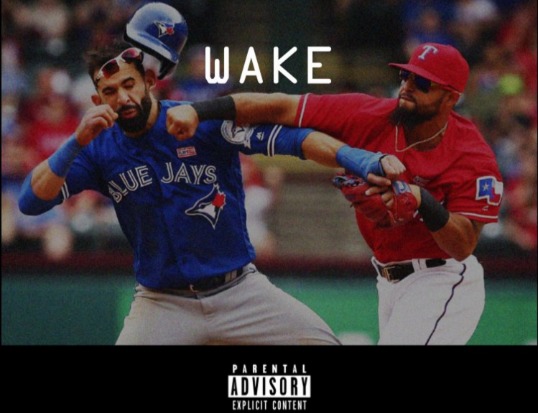 Joe Budden Uses Drake's Medicine Against Him On "Wake"

New York, NY – Drake may be too big to respond to Joe Budden and his incessant dissing but you had best believe this is a calculated war for Mouse.

After last week’s “Making a Murderer (Pt. 1)” didn’t get a rise out of anyone in the OVO camp (at least publicly), Budden returns with “Wake,” a more targeted hollow tip that brings to light many of Drake’s alleged shine-stealing tactics to keep himself in the spotlight and those around him in the shadows.

The record’s cover art utilizes that infamous Rougned Odor to Jose Bautista cold clock and given the lyrical anecdotes included in the song, it was a suitable choice for a photo-op.

Remember Drake’s appearance in Fetty Wap’s “My Way (Remix)” video? Of course you don’t. It never happened. Joe brings it up. The Weeknd and ILoveMakkonen have since branched out on their own after coming up underneath the 6ix god. Joe brings that up too. Even Courtney from Hooters on Peachtree gets thrown into the equation. Joe (and araabMUZIK once again) used the Petty Crocker recipes to cook up this slander stew.

To top it all off, Joe intentionally released the track at 2:31 AM — the exact time Drake was born. This takes subliminal trolling to a whole ‘nother level.

Only two questions will remain: 1) Will Drake respond and 2) will Joe ever stop either way?

Listen to “Wake” down below and determine your own conclusions for now.

The lyrics courtesy of Genius can also be found below. (Joey has already verified them and everything. Hell, he probably pre-submitted them.) Let the record show that there is no mention of Hollow Da Don, either.

[Intro: Kenny Powers]
New Joe Budden!
Good afternoon everyone. I’m Kenny Powers. If you’re here and you’re someone Shane cared about, or someone Shane loved. Or maybe you’re just somebody who has no business being here at all who’s just here because you think it’s gonna make you more popular. You know, Shane and I used to fuck around big time. We fuckin’ partied hard. We’d ride our vehicles around. Slay ass

[Verse 1]
My condolences, my condolences
Whole family in mourning send my condolences
My condolences, crazy I just spoke to him
Courtney dropping drinks all in Hooters
She losin’ focus shit
Don’t send a text, I don’t care y’all mad
Shit, I waited 5 days nigga where y’all at?
For real, I’m calling Stunna
Cause all Summer 16, ain’t heard a hot 16 ’bout all Summer
Awareness is high, say attention I’m seeking
Since I’m reaching, it’s offensive they’re convinced I’m a demon
Such a thin disagreement, son my kin for a reason
Killing you is expected of me, I don’t win an achievement
Somebody pinch me I’m dreaming, take this mental reprieving
Since I know the nigga, I know this ain’t the man that I’m seein’
I heard it straight from the ‘Bama’s mouth, he won’t pull a hammer out
Wasn’t you at Hov’s show scared to pull the camera out?
I’m seeing habits switch, magic tricks
You froggy behind that Apple fix
The passiveness in your manor I might react to it
Automatic shit
Ratchet kids at your crib that can’t even spell Calabasas bitch
So I take all the guns, load half the clips
I just notice you run, we mention half of Clipse
I’ll save that for another time I’ll get back to it
I’m kinda shocked to look at what we’ve advanced to
Knew it’d get you dismantled, knew the issues I ran through
Sick of the scandal, or maybe I just misunderstand you
I kept it a buck, thought that, that was shit you could handle
You said that you wondered if anything you doin’ was brand new, right?
I got him, no one help, father punch below the belt
Introspection means dig deep, let’s look below the wealth
I wanna know myself
How you tell bitches know they self
When you don’t even know yourself?
You wouldn’t know yourself
Say he Canadian, maybe Asian, Croatian
Be sounding like his Jamaican friends, depend on what state he in
I think you rap good, but you a movie star
So that owl’s appropriate, we don’t know who you are
Where did the boy’s brain change? Was it the club scene?
Now you sound like you use people and love things
But later for how you use people and love things
The entendres that upswing when I call you drug king
That record contract, leaves a lot to exam
Never dealt drugs in his life, but sold a lotta gram
That’s too much baking soda, good thing my break is over
They thinking cause my paper lower, this for Rage to blow up
Or maybe they just woke up
You leverage your celeb, taking waves over
That’s territorial takeover
Maybe he thinks nobody notices
Gucci wasn’t home two seconds before you rode his dick
Bodied Versace flows, copy, that he stole
Ay dios mio, sorry Migos, adios amigo
Was that your plot all along?
Why you ain’t do that vid with Fetty but you hopped on the song?
No really, we want a Party album
But you keep stealing all of Party’s album
To go and put it on your party album
It’s plenty reason to slay you
Kept going up Tuesday’s and now The Weeknd just hates you
Are you lifeless? Sound like a zombie on the track
Remember “Started From the Bottom,” it was Zombie on the Track
Know who else started from the bottom? Zombie on the Track
How come after that joint I don’t see Zombie on a track?
I’m from Jersey, so Zombie I got your back
Be alarmed the real is finally back
Get your guard up now, hope your heart up now
Battery in him, let’s see if he get charged up now
I’m wake
I’m wake
We at the wake

[Outro: Kenny Powers]
Who’s Goose and who’s Tom Cruise?
Well now that Shane is dead I guess we know who is Goose. Shane is Goose. Cause in that motion picture, Goose dies, so Shane is dead so he would be Goose