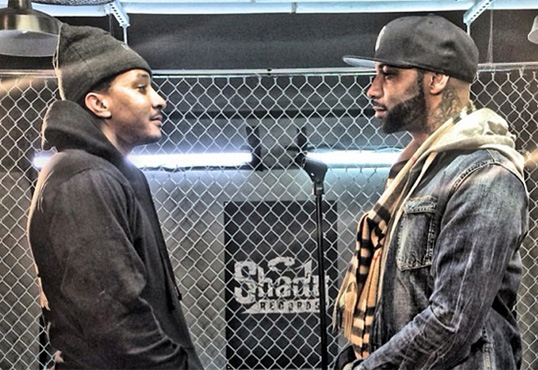 When Joe Budden released “Making A Murderer (Part 1),” the diss track that took shots at Drake and (to a much lesser extent) Meek Mill, he said it was all in the spirit of bringing competition back to Hip Hop. Well, he’s found some competitors, but not the ones he expected.

Meek dismissed the Slaughterhouse rapper with an Instagram post, and Drake has yet to respond at all, but now two battle rappers have joined the fray with on-wax rebuttals.

Hollow and Budden stood across from each other in person when they clashed in the main event of “Total Slaughter” in July 2014, a battle that the judges gave to the veteran battle rapper.

In a song that co-opts the presumptive title of Budden’s follow-up diss, “Making A Murderer Pt. 2,” Hollow goes in on a few angles of attack. Among them: Budden’s ex (you lookin’ sloppy, Joe / Sloppy like the toppy that Tahiry gave to Drizzy though”) and his podcast’s audience numbers (I drop one battle, it get views on views/You barely crack a hundred thou’ with your reviews on Views). He ends the song with audio from their battle, when the crowd began booing Budden.

The video also acts as a promotional tool for Hollow’s LOM Clothing brand, which just happens to have a new line of shirts that aligns him further with Drake. The second letter in each of the words in the Loyalty Over Money slogan is highlighted, spelling out OVO.

Drake and Hollow have known each other for at least a few years through Drake’s well-documented status as a battle rap fan, and also with Hollow putting the Toronto rapper onto Mike Zombie, who produced tracks for Hollow before creating the mega-hit “Started From The Bottom” for Drake.

Check out the full track below.